As the Kansas football team attempts to earn its first Big 12 victory of the season Saturday versus winless Baylor, the Jayhawks expect to have one of their most talented players available to help them in that endeavor.

Junior captain and standout defensive end Dorance Armstrong Jr., who suffered an ankle injury during the second quarter of KU’s loss to rival Kansas State and didn’t return, was cleared to practice Tuesday and could be back to full strength in time for kickoff against the Bears (11 a.m. Saturday at Memorial Stadium, FOX Sports Net).

“He looks like he's going to be fine,” Kansas head coach David Beaty said at his weekly press conference. “Looks like everything is good to go for practice. He's cleared for today, so hopefully everything will work out and we'll get him full-speed by Saturday.”

Armstrong made a season-low one tackle against K-State, but also forced a fumble before later limping off the field and watching the rest of the game from the sideline, often on a stationary bike.

“I just rolled my ankle. I figured I would come back,” Armstrong said of his initial in-game reaction to the injury. “But it was just a little too much pain and the way K-State ran the offense I wouldn’t be able to hold my ground like I need to.”

“KeyShaun came in, held his ground, made plays, as was expected from him,” Armstrong said after Simmons, a junior college transfer in his first year with KU, made a sack and two solo tackles. “The rest of the game, the defense, they did their thing.”

Armstrong, who is receiving treatments on the ankle three times a day, said it felt much better Tuesday than it did three days earlier: “I’d go with a good 90 (percent) right now,” he said. “Pretty sure by the time Saturday comes I’ll be at 100.”

Although Beaty has complimented redshirt sophomore quarterback Carter Stanley for his play vs. K-State — 23 for 48 passing, 418 yards, one touchdown, one interception — the third-year head coach hasn’t come out and declared Stanley the Jayhawks’ starter for the remainder of the season.

Asked for an explanation on the matter, Beaty replied: “Y’all know me, you're only as good as your next.”

The coach added that if Stanley stays healthy and continues to be productive as KU’s QB after replacing former starter Peyton Bender, he doesn’t think there will be any reason to take starting duties away from Stanley.

“It's a production business. If you continue to produce, we'll stay with you, obviously, right?” Beaty said. “I will say this, having Mesa (Ribordy, starting center) back was a big deal. You know? I know that the previous two weeks with Peyton were tough (a 45-0 loss at Iowa State and a 43-0 defeat at TCU), but there's a big difference in the amount of time that Carter had to throw and Peyton had to throw the last two weeks now.” 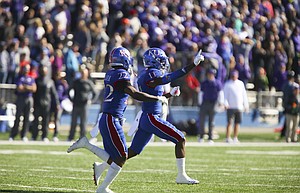 Beaty said the staff went with sophomore Shaq Richmond at Lee’s normal spot because coaches wanted Lee to address some on-field issues that plagued him recently.

“How he tackled, how he fit into certain gaps, just a couple of feet here or there was making a big difference on how much space a running back was having as he broke through the big gap and the boundary,” Beaty said. “Those things are very important for a young guy. They don't understand it sometimes.”

Lee went on to make seven total tackles and two tackles for loss as a temporary substitute, which made Beaty proud.

“He tackled so much better than he had. He still had some things that he's got to get better at. But I warned, we warned him, and I talked about it publicly, our job is to not let him have a sophomore slide, because that happens almost everywhere,” Beaty said. “When you have a really good freshman year, it's very, very difficult to replicate that as a sophomore.”

A 5-foot-11, hard-hitting defensive back from New Orleans, Lee has 59 total tackles on the season, as well as two interceptions.

Kansas (1-7 overall, 0-5 Big 12) again played this past weekend without one of its starting offensive linemen. Though center Ribordy returned, the Jayhawks lacked right tackle Zach Hannon because of an unspecified injury. 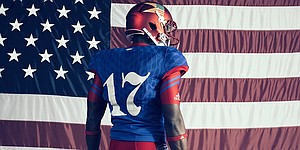 KU and Adidas on Tuesday unveiled the "Jay-Hawkers" alternate uniform, which will be worn in conjunction with the program's annual Salute to Service weekend.

“Not having Zach hurts you,” Beaty said of the graduate transfer from Nebraska, who was replaced in the starting lineup by redshirt sophomore Clyde McCauley III. “He's got a lot of knowledge, he's been around a long time, but he's unavailable. We'll see if we can get him back this week. I don't know if we will, but hopefully we can. But it's good to see those guys behind him continue to develop so we don't have a huge drop-off.”

KU and Adidas on Tuesday unveiled special "Jay-Hawkers" alternate uniforms, which the team will wear against Baylor (0-8, 0-5) in conjunction with the program's annual Salute to Service weekend.

With inspiration from Kansas’ history as a “free-state,” the special-edition look was inspired by Colonel Charles Jennison and his 7th Regiment Kansas Volunteer Cavalry. This cavalry regiment, which was also known as Jennison's Jay-Hawkers, was established in October 1861 and served the Union Army during the American Civil War.

“They really are first class,” Beaty said of the alternate look for KU’s helmets and jerseys. “Those uniforms were created, you know, this week, basically, honoring the Civil War era, inspired by the Free Staters of Kansas. So it's a really, really cool deal. If you haven't seen the background on it, some of that stuff, the symbolism behind it, it's really cool. Very detailed, really cool.”

This is a make or break week for both players and coaches.

I really haven't paid any attention to them but I do know that, going in, they have a better head coach. So, if you take the offensive 3 and the defensive 3 and add a coaching advantage, an 8pt underdog makes sense for us.

I will say that I was surprised by KU's effort on Saturday. I thought that they'd look out at that sea of purple in the east stands and have a rough time getting motivated. Hats off to those young men for their effort.

I've not seen a convincing case yet for why Beaty should be retained but, if he loses on Saturday, it has to be over, right? If he wins, it would be hard to fire him afterwards, which is why Girod should have done the right thing and made the move a week or two ago.

Our only hope is that Girod is doing a ton of work behind the scenes to be able to move instantaneously at the conclusion of the season, or on Sunday if we lose to the winless Bears.

I disagree with the amount of time Stanley had to throw. He was still sacked 4 times, with one of them being an untouched blind side blitz. Stanley didn't have much time to throw all day Saturday. If he had more time, it was because he made more time by extending plays with his legs. How many plays did he remind everyone of Todd Reesing? The 60 yard pass to Steven Sims was a play Bender couldn't have made. See Link: http://www.espn.com/video/clip?id=21199054 Bender may be great on a team with a decent Oline, but Stanley is the best QB for KU's current Oline.

I agree. I knew that Stanley will have an asterisk against his name, because Beaty does not like him... Beaty does not realize that Stanley is the only one who can save his job! Someone needs to tell Beaty that " “It's a production business. If you continue to produce, we'll stay with you, obviously, right?" applies to his job too!

“Y’all know me, you're only as good as your next...“It's a production business. If you continue to produce, we'll stay with you" -- Coach Beaty

Well, that oughta tell you whether he's earned a 4th season as head coach. In the "production business" he's barely moved the needle.

I wish that KU had a signature football uniform that made us proud.

"our job is to not let him have a sophomore slide, because that happens almost everywhere,” Beaty said. “When you have a really good freshman year, it's very, very difficult to replicate that as a sophomore.”

Is he serious? His expectation is for sophomores to regress?

Jesus Pete...with that philosophy it's no wonder the Jayhawk ship is still taking on water.

Does anyone know, is Carter Stanley, an alcohlic, a sex addict, does he not go to class, just what has Beatty got against him. Anyone who watched the team respond to Carter at QB, knows who the best leader is. Nothing against Pender, I wish he could run, he would be tremendous, but the team knows and trusts Stanley. So why not use that ingredient, there was no reason to bring in another qb, We were not a great team, that just needed a qb.

What a joke. That kind of decision making, makes one wonder about the direction of the program.

I hated to go to class, love to drink and have sex! Let Stanley start!

Beaty needs to stop saying "you are only as good as your next" when he has such a horrible record. He should be held to that standard.

Beaty is only as good as his next __?

If you can't see the difference in on field leadership abilities between Stanley and Bender you should not be a head coach.

Beaty doesn’t like being wrong. Unfortunately, he’s been wrong a lot more often than he’s been right. Bender wouldn’t be a good QB with Alabama’s OLine. He doesn’t have the vision that a QB needs. If his guy isn’t open he panics and either gets sacked, throws a horrible pass, or simply just throws it to the other team.