No one associated with the Kansas football team’s backsliding offense is taking lightly back-to-back shutouts, featuring a combined 127 total yards. The tricky part currently is putting the consecutive misadventures permanently behind them.

“Look forward and kind of draw a line in the sand. Enough’s enough,” KU offensive coordinator Doug Meacham said of his message to players this week. “That type of thing. And just try to press ahead the best you can, not dwell on what happened.”

In one way, Meacham explained, this week’s preparation for rival Kansas State will be no different from any other, despite the recent barren results.

“It’s always the same. You take the video and see what you’re deficient at and try to improve on it that week. And just try to find ways to get your guys the ball. And then find ways to protect within the scheme,” the first-year KU coordinator said.

These past several days have deviated from some weeks, though, due to the number of fires Mecham, head coach David Beaty and other members of the staff have to put out before the Wildcats (3-4 overall, 1-3 Big 12) show up Saturday at Memorial Stadium (2 p.m. kickoff, FOX Sports 1).

For starters, Kansas (1-6, 0-4) is reeling along the offensive line due to the absence of No. 1 center Mesa Ribordy, a game-time decision for the upcoming rivalry game. KU tried Jacob Bragg at center at Iowa State and Zach Hannon there at TCU, but the O-line each week lacked the cohesion it flashed earlier in the year, before Ribordy’s undisclosed injury.

Meacham didn’t use Ribordy’s unavailability as an excuse, but admitted it is difficult for the offense to produce up to his standards when the coaches are shuffling players up front.

“Yeah, I mean it’s hard. Hard to do things,” Meacham said, with a wry laugh, before confirming the coaches continue their mixing and matching on the O-line in an attempt to find a combination that clicks.

With Hannon at center instead of right tackle, Hakeem Adeniji over in Hannon’s usual spot and Clyde McCauley III making his first start of the season at left tackle, Kansas rushed for a gut-wrenching minus-25 yards at TCU. A reporter asked Meacham whether the issues on the line made it impossible for a running back to succeed.

“I don’t know how to answer that question,” Meacham replied, “because if I say, ‘Yes, it’s impossible,’ well, were we giving up? No. It’s not impossible.”

Then there is the matter of starting quarterback Peyton Bender’s slump. The junior transfer went 8-for-19 for 18 yards, with an interception, at ISU, and followed that up at TCU with a 7-for-16 outing that netted 38 yards through the air. 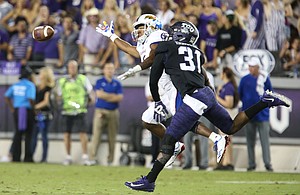 Kansas wide receiver Quan Hampton (6) has a pass broken up by TCU safety Ridwan Issahaku (31) during the second quarter, Saturday, Oct. 21, 2017 at Amon G. Carter Stadium in Fort Worth.

“Not really. Not really,” he repeated.

KU’s Air Raid coordinator remained confident in the team’s ability to get Bender back on track, despite the O-line’s struggles.

“You’ve got to move him around in the pocket a little bit, change the launch point some,” Meacham said. “The tough part of it is when it’s third-and-15. I guess we can run the draw and punt every time and not take a sack. But you’ve got to take your shots if you can. Unfortunately we’re backed up and having to take a shot and everybody in the stadium knows you’re throwing it. And (TCU is) pretty good. We’ve got to do a better job on first down and just run the football and stay between the sticks.”

Bender said KU’s offensive players know what they have displayed the past couple of weeks is “not acceptable.” The quarterback also realizes the focus placed on him.

“Coach says it’s a competition every week, so every week we go in and we compete to the best of our ability in practice. That’s the same way I’m going to approach it this week,” Bender said, “just go in here and compete as hard as I can.”

It’s up to Meacham to maximize whatever lineups KU is able to put on the field against Kansas State. He, like many, is frustrated with the nonexistent offense of late. But Meacham said back-to-back shutouts haven’t led him to reach out to a former colleague or mentor to vent or spitball solutions.

It’s the hope of Meacham and his players the recent unpleasantries are behind them.

“Yeah, it’s out of my system. As cliche as it sounds, you know, this is a great opportunity to get a win and make everything feel a hell of a lot better,” he said. “So we’re just kind of focused on that more so than what had happened.”

no one sounds very confident things will change.

The kids know it's over. It's just the millionaire administrators who haven't figured it out yet.

I'll be at the game, cheering for Dorrance and Mike Lee and Daniel Wise and Joe Dineen and every kid who is giving his all. I'll also be hoping that on Sunday morning, Girod actually decides to do his job.

Will the KU squad - a pile of Texas leftovers - care about the rivalry? Of course not!

This sums up just about everything that's wrong with our situation. http://www.kansas.com/sports/college/big-12/kansas-state/article181073661.html

This article depicts quotes that baffle the mind. In my thinking accept for week 1 it has all been unacceptable. You guys are paid a million dollars. Fix it already! You lose one guy and nobody else can block? WTF, find somebody to do the job.

That's what I thought. We lose one lineman and we don't have enough depth to replace him without shuffling everyone into new positions?

Meacham is beginning to look like an OC that can run a good offense if he has the horses - otherwise zilch. Kinda like the Big Tuna...he was an offensive genius at New England when he had Tom Brady running the show.

YTD Meacham can't be assigned a grade other than "F".

Jerry, that last sentence is perfect. Wish I could give you more than just one thumbs up!

"For starters, Kansas (1-6, 0-4) is reeling along the offensive line due to the absence of No. 1 center Mesa Ribordy, a game-time decision for the upcoming rivalry game."

Are you trying to say the reason the offense has sucked more then normal is because the freaking center was out??? LMFAO

"KU’s Air Raid coordinator remained confident in the team’s ability to get Bender back on track, despite the O-line’s struggles."

Back on track? When in the hell was he on track before?

I giggle every time I see them call this offense an "Air Raid' lol. Clueless idiots.

Scott Frost, former Nebraska quarterback and Oregon OC, is the head coach at UCF and is 6-0 this season.

And he leads a team that 3 years ago was one of only two FBS teams to go 0-12. Guess who the other team was?

Loser article about a really bad football team. Defeatism permeates every corner of the Football Program from top to bottom. The Decade of Despair has its tight grip on the necks of the few remaining fans. Seriously folks the KUAD wastes tens of millions on a historically terrible program. For the most part the same administrators have been in charge for the last ten years and they alone have destroyed Kansas Football. And the price they pay for their actions? Continued employment, raises and fat paychecks.

Last season, TCU finished 6-7 for the season. This year, Kenny Hill got his act together as a QB and TCU is 7-0. Last season, KU's basketball team played with confidence all season long until they played Oregon, then they tighten up and lost the game. All it takes is a team to gain confidence and then things can turn around quickly. If KU doesn't put themselves in the hole in the first quarter, they'll probably can play a good game against K-State.

That comparison makes no sense. Oregon was a very good team; KU is a very bad team.

Nobody knows everything. Everyone...in about every job in the world can always used an outside mentor or friend to gain different perspective. Gain insights from someone objective and not in the middle of the mess. As a professional tax accountant, I have several people in my network to discuss ideas and insights with. Meacham's quote reeks of stubbornness and self-centered pride.

I am confused as to why Stanley is not receiving more consideration as a starter from the coaches. He's the only quarterback on the team that has a Big 12 win to his credit. He is extremely mobile and has shown that he can pass on the run.

Are the coaches just being obstinate or is there an injury explanation?

Beaty wouldn't want to see his Golden Boy Bender on the bench!

As far as Mr. Zengers' replacement....he needs to be a former D1 football coach....Glen Mason....Mack Brown...Phil Fulmer....someone who understands all things about footballl from the coaches perspective...who has lived and breathed it.....if Beaty had an athletic director like that...he may be in a different place today.....a former coach has credibility....where as...some one like Mr. Zenger doesn't speak the coaches language ...I think a Mack Brown ...Gene Chizik team here would bring back winning football here.. in a couple of years....I think Glen Mason would be great also...lots of great former coaches out there to choose from.....the bottom line is.....the AD must be a former football coach...period!