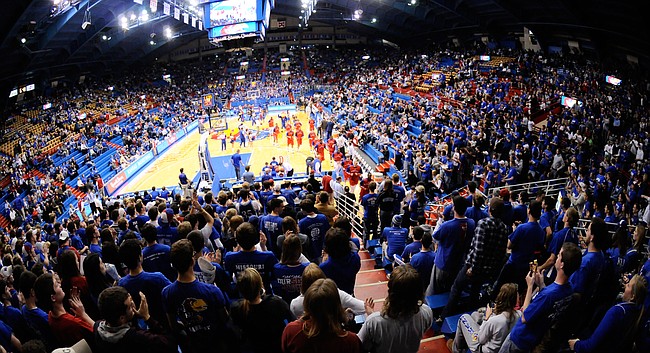 Kansas Athletics Inc. has enlisted an outside law firm to assist with an NCAA-mandated review of its men’s basketball program following a federal investigation that is rocking the sport.

Working with the Overland Park-based law firm of Bond, Schoeneck & King — which has a longstanding relationship with KAI and recently helped KU in its high-profile quest to gain eligibility for former KU forward Cheick Diallo in 2015 — a KU spokesman said the review largely will cover the same ground that its compliance department does on a regular basis.

“In light of the NCAA’s request, we have enlisted them to make sure that we’re doing it the way we need to do it,” KU associate athletic director Jim Marchiony said of review assistance from Bond, Schoeneck & King. “We’re not asking them to come in and conduct an examination. We’re going to ask them to help us make sure that we’re doing it correctly and that we dot all the i’s and cross all the t’s.”

The Journal-World reported last week that KU was conducting an internal review of its men’s basketball program after receiving notice that the NCAA had instructed all Division I programs to conduct such a review. However, the NCAA has not made any public announcements about such a review, and previously declined to comment when asked by the Associated Press.

However, the Journal-World has obtained a memo from the NCAA’s Board of Governors and Board of Directors that does “require all Division I institutions to examine their men’s basketball programs for possible NCAA rules violations.”

The memo asked that universities:

• Examine their programs for violations related to “offers, inducements, agents, extra benefits and other similar issues.”

• First review whether there are any eligibility consequences arising from previously undiscovered rules violations. Those eligibility reviews should be completed immediately.

• Review the conduct of its men’s basketball coaching staff and administrators to ensure their compliance with the NCAA rules. The memo said the NCAA board is “mandating that each institution” conduct that review.

“The impact of inappropriate behavior by coaches and administrators can be devastating to student-athletes and may violate institutional obligations under the rules,” the memo states “The sooner any wrongdoing can be discovered, the sooner that NCAA Division I men’s basketball can move forward to be a stronger game.”

The memo also instructs schools to discuss with their legal counsel whether there are any potential criminal matters that should be brought forward to the U.S. Attorney’s Office for the Southern District of New York, which is leading the federal probe.

Other than urging that eligibility reviews be completed “immediately,” the NCAA did not mandate a start date or request a formal report of the examinations. But KU, like many schools, chose to act immediately. KU has not announced a timeline for the review to be completed.

Marchiony said compliance as a whole at KU is a regular part of the athletic department’s daily routine. In addition to regular conversations between coaches and compliance officials, KU’s compliance office puts out a monthly newsletter, complete with a “compliance champion of the month” among the staff and also maintains an open-door policy for any employee, student-athlete or donor to answer questions or hear concerns.

“Our compliance staff talks to all our coaches more often than most married couples talk,” Marchiony said. “It’s on a daily basis. We do checks and balances, examination, discussions, just to make sure everybody’s on the same page in terms of what’s permissible. So this examination is really nothing more than what we do with our compliance office on a day-to-day basis with all our sports.”

That process, along with the ongoing additional review of their practices, falls in line with the goal behind the NCAA’s recent request.

“We know that our member institutions share the concern that the Board of Governors and the Division I Board of Directors have about the issues facing the sport of men’s basketball today,” the memo states. “We believe that we have outlined an approach that will meet the immediate needs of the 2017-18 men’s basketball season and will set the stage for substantive reform . . .”

If I was a betting men (and I am-LOL), I would lay long odds that our Coaching Staff is completely clean, and there will be no wrong doing by the University of Kansas! Rock Chalk, Baby! But I would venture to say that there’s are going to be a few surprises! Yep!

Regardless of what happens and what is the ultimate outcome, this is how you proceed. You want your institution to know first if there have been any violations of any kind so you can get ahead of it yourself. You don't want problems or violations, or known criminal activity to come from anyone but the institution itself first. In this situation, no self deceit, know cover ups, no lies. If you find them, you come clean asap. Self-reports have the best chance of leniency, if such a thing will exist. As the saying always goes (people make the mistake over and over), "it isn't the crime as much as it is the cover up."

This may be nitpicking, but Bond, Schoeneck & King is not an Overland Park, based firm. The firm is based in New York, (Albany specifically but they have offices all over the state) and they also have an office in Overland Park. The office is there because they had an outpost there when the NCAA was headquartered in Overland Park. The NCAA moved, as we all know, to Indianapolis, but the guys with the NCAA experience didn't want to go there and by that time, they didn't need to be in the same zip code as the NCAA, so they stayed.

Again, I realize this is nitpicking. The firm has an office in OP and that's what you meant to convey, but they aren't based here anymore than General Electric is based in Kansas for having a call center here for one of their financial services companies.

You're right, that is nit picking.

I realize this is nitpicking, but when connecting two sentences to make a compound sentence, you need to use a comma with your conjunction. For example, you should have a comma after the abbreviation "OP" since you have a conjunction and a complete sentence directly following. The same would be true of the sentence directly preceding.

Again, I realize this is nitpicking.

Don't blame Gavin because Matt had it wrong.