The statement on its own defies logic, but here it is: the Kansas football team’s defense surrendered five touchdowns and a field goal Saturday at Iowa State and played better than it had in any other game during the first half of the season.

It’s a relative assertion, for sure, given the Jayhawks’ calamitous defensive results through much of what currently stands as a five-game losing streak. Even so, holding the Cyclones to 318 total yards of offense and forcing nine punts allowed KU defenders and coaches to at least take a little pride in some obvious improvements.

Head coach David Beaty, who has at times this year criticized the most crippling defensive blunders following defeats, said the Kansas defense “by far” had its best showing to date.

“The thing about it, we give up 45 points. I look up at one point it’s (24-0) and we’d given up 123 yards,” Beaty said. “I stepped in the huddle with our guys and I told them, I said, ‘Look, I know what the scoreboard says. But you’re playing good defense. Just keep playing, man. We just can’t give up big plays.’” 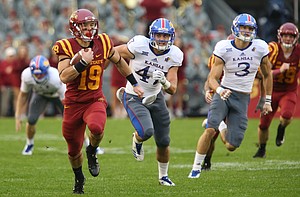 Maybe it was the wet field conditions at Jack Trice Stadium. Perhaps having game footage with which to study and prepare before facing walk-on quarterback Kyle Kempt made things a little easier on the Jayhawks (1-5 overall, 0-3 Big 12). Whatever the case, the defense certainly wasn’t to blame for the loss.

“It just goes back to the very beginning. Joe (Dineen, junior linebacker) did a nice job of taking over the huddle. We gave up 318 yards to a really, really good offensive football team,” Beaty said of ISU, which now averages 400.5 yards a game, 68th in FBS.

While Dineen’s 16 total tackles and two tackles for loss played a key part in limiting the impact made by the Big 12’s fifth-best rusher, running back David Montgomery (3.2 yards per carry, 68 rushing yards), the KU secondary also consistently took away the threat of receiver Allen Lazard (three catches, 40 yards, on four targets).

Even standout linebacker/quarterback Joel Lanning was limited to 34 rushing yards on eight carries.

“We put pressure on them early. Eventually they needed some help, and we weren’t able to complement them on the offensive side,” Beaty said of a pitiful 106-yard no-show for the Jayhawks in the 45-0 shutout.

Even when ISU (4-2, 2-1) scored, it did so in short-field situations, with four touchdown drives of 35 or fewer yards and none longer than 56. The Kansas defense, though so often on the field with ISU possessing the ball for 36:50, forced seven three-and-outs.

Such positives were difficult to find for the Kansas defense in prior weeks, when it allowed an average of 569.5 yards against FBS opponents.

“Yeah, we can feel it,” junior defensive end Dorance Armstrong Jr. said of at least one week of genuine enhancement on that side of the ball, “with the three-and-outs that we got, that’s just what we usually do — that’s how we played last year. Since we started that’s what we’ve been trying to do: get back to how we were playing last year, and do even better. I feel like we’re actually on the page of taking another step forward.”

After KU made three sacks — by Daniel Wise, Josh Ehambe and Isaiah Bean — and nine tackles for loss at ISU, junior tackle Wise said, putting the result aside, the defensive players felt positive for a change.

“This game was very encouraging for our defense. Guys, we certainly should build confidence off this game, especially after the last game, Texas Tech,” Wise said. “We’re just going to keep building from here.”

None of KU’s defensive leaders seemed interested in singing the unit’s praises following a lopsided loss— even if they performed better for coordinator Clint Bowen than they had since 2016.

“Defensively, yeah,” Dineen replied, when asked if it was the best the group had played. “But there’s still so much growth that we can have. … I mean, 45 points, no matter what happens through the course of a game, it’s our job to keep them out of the end zone, and we didn’t do a good enough job of that. But I am proud of the way we came out and played in the first half.”

The Jayhawks will need a similar defensive start — and some serious help on offense and special teams — this coming Saturday at TCU (6-0, 3-0).

Benton, sorry to derail your article but I just read that Nebraska hired Wazzu's AD which means Leach will be the next Nebraska head football coach.

This is the type of package deal we need to do with Wyoming to get Craig Bohl. And it works because we will need a new AD and head coach. Ding, Dang, Done.

Regarding KU's defense, the 9 forced punts were something to get excited about. My concern is that the weather may have been a big factor. However, if there truly is some improvement going one, and we see signs of it in Fort Worth, then I think it would be just the thing that could breathe a little air into the team. The problem is that we are facing the best defensive coach in the conference on Saturday, wo it's entirely possible that we won't get 100 yards offensively.

NU would be crazy to hire Leach. He's fun, sometimes, but mostly unstable and unreliable.

I wouldn't care if Leach is clinically insane. He's a winner. We need a winner.

They played better than the Chief's defense is playing today.

BREAKING NEWS: The University of Kansas announced today they are dropping football as a intercollegiate sport due to rapidly emerging research demonstrating permanent brain damage as a result of repeated collisions involving the head in the course of playing the game. Stated Athletic Director Sheahon Zenger, "thankfully we didn't really hit anyone hard enough to create a head injury to one of our players, but it could happen some day. And we are not going to take that chance. Our $300 million dollar football stadium renovation will be used to turn Memorial Stadium into a park allowing people to go and sit to contemplate the horrors of football and talk about the coming year's basketball team and possible new recruits."

This is like North Korean propaganda in order to save Clint Bowen's job.

I just consulted my Magic 8 Ball, asking whether or not Kansas would win another game this year. This was the answer I got:

Beaty Iives in a dream world and should not only be fired, but committed! What a freaking idiot.

What if, Gus Malzahn happens to be ran out of Auburn, Alabama. What are the thoughts about Malzahn? He'll turn 52 by the end of this month.

I read an article a couple of years ago where the author had tracked what happened to guys who got fired. The vast majority of them failed again if hired by another program at the same level. After watching a failed Notre Dame coach, I don't think there's be much excitement for a failed Auburn coach.

"Every facet of the program needs the head coach's attention every single day. Whether it's preparation for a game, film study, meetings, practice time, recruiting...communicating with the support staff, your trainer, your strength coach. Every day there should be conversations there and just keeping an eye on things and everybody needs to be on the same page. If anybody has an agenda other than what we have for the program then they shouldn't be there...they all have to be pulling that rope in the same direction. There are challenges at every program but there are significant challenges at Kansas...so there are many challenges there, but it's DOABLE! IT IS DOABLE!"

Thank you, Joe. Once again you are the voice of reason. I would like to see him come back. I'd love to see it really. Yes, he could and would do it.

IMO our AD has to dusregard the pc hire, the guy who always says the right things. Those types tend to be schmoozers, stroking those around them (especially their bosses) instead of holding people accountable and calling out those bosses on occasion. I've heard that Mason in response to his staying at KU said show me the money and people were offended at that. Good grief, its business. Why wouldnt he ask for more if he could command more? We absolutely need to get over trying to get someone acceptable to all parties. When we do that we're getting someone who doesn't want to be crossways with anyone, etc.

Agreed. We need someone unafraid to piss people off. There a lot of people at KU who need to be pissed off.

Not really. ISU went completely vanilla just waiting on KU to implode which took exactly 1 play. When five o-linemen can't block 3 D-linemen, it doesn't take much to realize you can sit back and play field position ball and pounce on mistakes. ISU knew that as long it didn't turn the ball over it was going to win because KU couldn't move the ball. Therefore, vanilla offense.

I think everyone is forgetting that FEAR is the number 1 motivator in football....maybe that's why mangino was so successful here but we dang sure don't show no fear on the sidelines...no fear of messing up no fear of missing an assignment no fear of losing a game....it's embarrassing...somebody has to be held accountable and these players should be held accountable and at this moment there not.....they have been taught for the last 5 years "next play" and its just a freakin excuse....it's not the process or more time.......we need somebody to come in here and play some DAMN ball !!!

Mike hits the nail on the head. This s article is trying to put lipstick on the pig. We gave up 45 points and they had a short field most of the game. That’s not progress. Clint Bowen did not put together a master plan. Iowa State just didn’t have to do anything special.

Humpy That;s an old headline. We dropped football, when we fired Mangino., We;ve been playing tiddly-winks every game since.

The next headline we like to see is: KU Starting Football Program, now that would be something.

this shows how far we have fallen, to think that giving up 45 points is considered improvement.

4 touchdown drives of 35 yards or less... I think gaining less than 140 yards and hanging 28 points on an opponent says a ton. Unfortunately, our FCS level defense has to play FBS teams every week.