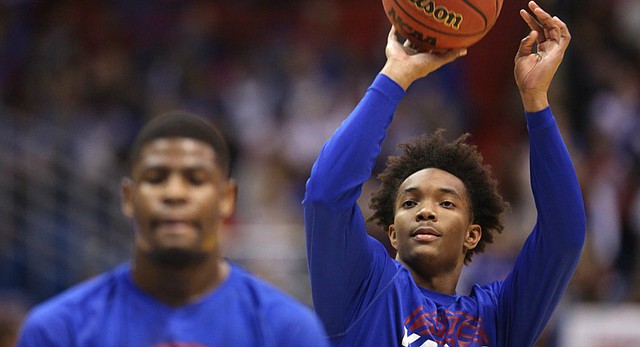 Kansas junior guard Devonte' Graham fires up a shot in pre-game warmups prior to Saturday's matchup against Nebraska at Allen Fieldhouse.

If his goal is to follow in the footsteps of 2016-17 Big 12 and national player of the year Frank Mason III, Kansas senior Devonté Graham already has a head start.

KU's senior point guard on Thursday was one of three Jayhawks to earn preseason all-Big 12 accolades, with Graham earning the nod as the conference's preseason player of the year.

In addition to player of the year, newcomer of the year and freshman of the year (Texas’ Mohamed Bamba), the coaches picked a five-man first team and nine honorable mention nods. There is no preseason second team.

"This is a great honor to be recognized by the coaches, especially with all the great players in the Big 12," Graham said in a news release. "It is also good to see Malik and Svi selected by the coaches. This is a team sport and we are working hard on getting ready for the season."

Graham becomes the eighth Jayhawk in the 21-year history of the Big 12 to be named preseason player of the year, and the first since Cole Aldrich and Sherron Collins shared the honor in 2009-10.

The Raleigh, N.C., native is a two-time All-Big 12 selection, earning second-team honors last season and an honorable mention nod in 2015-16.

Past Kansas Preseason Big 12 Player of the Year Selections

Past Kansas Preseason Big 12 Newcomer of the Year Selections