Publicly, Kansas football coach David Beaty doesn’t want anyone to know which of his team’s quarterbacks will start Saturday at Iowa State. Within the walls of Anderson Family Football Complex, the identity is no secret.

A day after stating he had no plan to announce whether Peyton Bender or Carter Stanley would start KU’s next game, the third-year head coach clarified Tuesday at his weekly press conference no suspense on the matter exists for the quarterbacks.

The Jayhawks’ published depth chart for the week listed Bender, who has started every game so far this season, ahead of Stanley, the starter to close 2016. However, Beaty said the circulated two-deep uses the previous game’s starters.

“But I think maybe the best way for me to handle that, guys, is our guys and our team and our coaches all know what our plan's going to be at every position, including quarterback. We know what we're going to do already,” Beaty explained. “I’m not going to share it publicly, obviously, because it gives us a little bit of an advantage.” 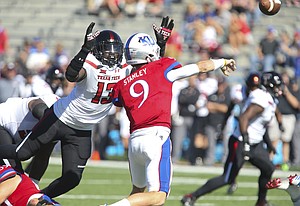 After Bender misfired on two possible touchdown passes from the Texas Tech four-yard line just before halftime this past Saturday, KU settled for a field goal and the starting QB watched the rest of the blowout loss from the sideline.

Bender said Tuesday he knows whether he will start Saturday at ISU (11 a.m., FOX Sports Net), “but I’m not allowed to say anything about that,” he added. “The team knows. We’ve got the game plan in, so we’ll be ready to go.”

Asked whether he’s careful not to tell anyone outside of the program such privileged information, Bender responded: “It’s all in house, so none of that will get out.”

Stanley, though requested for Tuesday’s media session, couldn’t attend due to a class conflict according to a KU official.

The redshirt sophomore said Saturday after taking all of the offensive snaps in the second half of a 65-19 loss he didn’t think a renewed quarterback competition would impact either he or Bender negatively.

Is there any hope left for KU football?

On this episode of the KU Sports Hour, hosted by KU football beat writer Benton Smith, the KUsports.com staff discusses what may have already become another lost season for KU football. Topics include: KU's lack of progress in 2017 (open-14:40), the quarterback controversy (14:40-28:55), the program's recruiting failures (28:55-38:15), the ...

Beaty stated the players and staff all understand the plan at QB as it stands right now and said they’re “excited” about it.

“We always have a competition at any and all positions. I know it's vogue to talk about the quarterback position and it may have its own separate entity and all that stuff, but it just isn't that way for us,” KU’s third-year head coach offered. “We don't look at it that way. We look at it as always competing to try to make each of us better. And those guys, they're roommates (Bender and Stanley), they’re buddies, they're friends and they're both competitive. So we know what our plan is, I'm just not going to share it with you. Sorry.”

Bender has passed for 1,373 yards, eight touchdowns and eight interceptions on the season. Stanley, who hadn’t thrown a pass in a game this year prior to Saturday, is 11-for-19 for 110 yards, with an interception and no touchdowns.

Asked to assess the skill sets of both potential starters, Beaty described the biggest difference between them as “obvious,” in terms of Stanley being a better runner.

Coming off a five-catch day for 102 yards versus Tech, receiver Steven Sims Jr., who caught three Stanley passes and two from Bender, said the rest of the team is “comfortable” with either option.

“So whoever coach chooses we’re not complaining,” Sims said. “We’re just going to go out there and try to win.”

Not sure it matters anymore. But I'm going to guess Stanley. Also, I don't see anything on ESPN that says where the game will be televised. Does anyone know?

I would like to see Carter Stanley giving a chance to start and play the next 3 full games, and than we can debate on who the starter should be. H deserves to start based of his last years season end performance, If after this season Carter isn't a starter and he decides to leave for more playing time else where I would have no choice but to respect it because Beaty was so in love with Bender from the moment he stepped on campus. All Beaty knows how to do is run QB's outta Kansas, by the way how is Montell looking over at Boise St?? Heard he was playing really well. P.S Please fire Clint Bowen!

Austin unless you are contributing big bucks to the KU Athletic Department I don't think your opinion about KU's football coaches is going to matter. The Fire the Coaches manta from all sports page posters is getting old.

Not as old as your "you are all idiots" posts.

John Brazelton, I don't care if my opinion matters to the Kansas Athletic department as long as the Kansas football team is struggling I will continue to voice my opinion, and If the fire the coaches manta from all the sports page posters is getting old you can easily scroll past our comments and not bother reading them. You have your opinion and I have mine and I will continue to voice my opinion,

John, we're all really sorry about complaining about the KU coaches, and we promise to run our opinions by you from now on.

I watched Cozart's first start (after Rypien went down, and Cozart looked the same to me (as he did at Kansas).

BSU got a lead, then lost it, and Cozart played very timid in the 4th Quarter and lost the game.

I have noting against Cozart, I'm sure that he is a very respectable and great individual. In conclusion, the change of scenery has not helped him. He's not an FBS Level QB.

I haven't seen Montell Cozart much this year so I was asking the KU fan base, but I happened to google his stats just now and 6 TDs to 1 Int isn't all that bad I would take that over Bender the turnover machine.

Unless his name is Todd Reesing I don’t think anyone really cares at this point. And depending on the road conditions from Aimes we’ll be lucky to have 20,000 fans Saturday.

Btw, I think Cozart has saved BSU’s season from total disaster. He had one horrendous play against WSU that cost them the game but otherwise has been a much needed spark. They’d be 4-1 had it not been for that pick six. It was very KU-like.

I'm guessing the number of fans at Memorial Stadium will be much lower than 20,000. Probably closer to 0, since the game is in Ames...

If there is anything that says we don't have a P5 coach, it's this baloney. It's like middle school theatrics. No one cares who the starting quarterback is going to be because you have the 9th ranked scoring offense in a 10-team conference. It's like spraying a garden hose at the Hindenburg.

I thought that KU was running the Air Raid.

They are; the problem is that they're running it with BB guns.

Lol. The games coaches play when the team is a rolling dumpster fire.

Hire me, AD, coach, maybe both. I'd also like to be in charge of marketing KU football. Chancelor too. I guarantee you.i could do all.three jobs, save the university a ton of money, get more wins, build more new facilities, create more jobs, and the weather would even change for the better. Did i mention championships? Thats what I'm about.

This is no different than what Coach Harbaugh was doing at MU tho with a bit less theatrics. Others have done the same thing at successful and struggling programs.

Technicalities. Why consider reality when there is a perfectly good pile for jumping on.

This is almost embarrassing to think that some little hide and seek game about who is starting will make ANY difference in the outcome of this game. Our problems are so many that this one factor won't matter a lick. Good grief Beatty, face reality man. Everyone knows we are not a good team right now. Take ownership of this fact. You won't get any better until you face reality. Sheesh.

Oh this will make a difference..... Shucks, why haven't we just lied about which QB was going to start if that's all it takes to win a game. Something tells me the Cyclones are getting a good chuckle out of this. Hopefully they're laughing so hard they forget to show up!