1. No easing into this one

Coming off a bye week well rested and thoroughly aware of one of the team’s biggest issues — starting slowly — the Jayhawks better not derail their chances again by sputtering in the first and second quarters.

In three straight losses they’ve fallen into second-quarter holes of 24-6 against Central Michigan, 25-7 at Ohio and 35-10 versus West Virginia.

Bucking that trend against Texas Tech is a must if Kansas wants to deliver head coach David Beaty the second Big 12 victory of his two-plus years in charge, against his old buddy Kliff Kingsbury.

Both defensive end Armstrong and fellow junior D-line captain Daniel Wise agreed a lack of focus contributed to recent insurmountable deficits. But as far as the defense is concerned, Wise didn’t think the inexperienced players on that side of the ball were to blame.

“I wouldn’t so much put it on the younger guys. I would say myself, as well as some of the other guys, maybe haven’t had the best examples for young guys — as far as communicating to them what we need out of them,” Wise said. “That’s what this bye week is for. Let them know what we need and how to execute it, and we’ll go on from there.”

2. Recognize the strengths of Tech’s defense

In the past, Kingsbury’s teams had a reputation of struggling defensively. Four games into his fifth season, the Red Raiders haven’t mutated into a defensive force, but there are signs of improvement.

Although they are allowing 30.0 points a game and 454.8 yards per outing (both eighth in the Big 12), their five fumble recoveries and five interceptions have helped them survive defensively. Texas Tech’s plus-seven turnover margin ranks sixth among 129 FBS programs.

“They’re getting takeaways, they’re flying around,” Meacham said of the unit led by junior linebacker Dakota Allen (35 total tackles, two tackles for loss, one sack, two quarterback hurries). “A lot of times when you’re flying around that stuff just kind of happens — be it a tipped pass or … you’ve just got numbers around the football. You’ve got numbers around the football, you’ll get it. You’ll get the ball. It looks like they’re doing a really good job of that, too.”

Only 13 FBS teams have had more passes intercepted than KU’s seven — all thrown by starting quarterback Peyton Bender — so ball security will be as critical as ever against Texas Tech.

Different teams implement different defensive philosophies, inspiring their offensive counterparts to react accordingly. Tech’s base 4-3 defense looks nothing like West Virginia’s 3-3-5. But that doesn’t mean KU should go away from the rushing success it experienced with Khalil Herbert prior to the bye week.

Meacham likely won’t feature Herbert as prominently against Tech, but considering Herbert totaled 428 yards and four touchdowns in his most recent two games, the Jayhawks now have plenty of incentive to keep feeding their star running back. 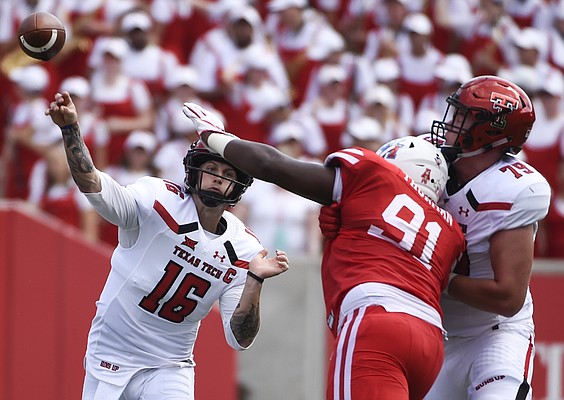 Entering the weekend, not even Oklahoma State’s Mason Rudolph nor Oklahoma’s Baker Mayfield are averaging as many passing yards as Texas Tech quarterback Nic Shimonek (394.5 a game).

Shimonek has completed 70.8 percent of his 171 passes with 12 touchdowns and just two interceptions, while five Tech skill players — led by banged-up receiver KeKe Coutee, whose availability Kingsbury said will be a game-time decision at KU — have at least 15 receptions.

“He will adapt to what his personnel can do. When he’s had the really good guys on the outside, well, guess who got the ball. The really good guys on the outside,” Bowen said. “Whoever his dudes are, they’re going to get the ball. He’s really good at getting his playmakers the ball and that’s what they feature. This year he’s continued to do different things in the offense. If you look at them this year they have the fullback, No. 29 (junior Mason Reed), in the game a lot more than they ever did. They’re actually using an in-line tight end with No. 17 (sophomore Donta Thompson), which has not been a part of their package. They’re in two backs a lot more than they’ve been in the past.”

In order for the Jayhawks to slow down the Big 12’s top passing offense, Beaty said they will have to be far more effective at pushing Shimonek’s pocket.

Kansas players and coaches had an extra week to review what ails them before taking on Texas Tech (42.2 points a game). If the Jayhawks are going to put up a fight on homecoming Saturday, they will have to show some significant progress in the secondary.

KU has surrendered a Big 12-worst 3.0 passing touchdowns a game and allowed opposing quarterbacks to complete 66.7 percent of their passes (also last in league) for 309.5 yards a game (ninth, just 0.3 yards better than Texas Tech).

Nothing might have been as important during the bye week as what the Jayhawks did to improve the secondary play of corners Hasan Defense and Shak Taylor and safeties Mike Lee, Bryce Torneden and Tyrone Miller Jr., and their backups.

“Obviously we went back to the very foundation of basic technique and trust, just trusting one another,” Beaty said. “Some of the issues that we face defensively have been guys trying to do too much, a guy trying to do his job and another guy's job. That's something that has plagued us in some of the big plays, so we've got to all do our job and trust the man next to us to do his job. When we do that, we will start seeing the success that we want to see.”

Beaty’s players and coaches will need to look far more sound in the secondary moving forward to steal a game in the deep Big 12.

If Clint Bowen defense comes out today and play poorly (Missed tackles, guys out of position, bad formations) than I think he needs to be demoted!! Clint Bowen accepted the job which means there is no excuses! He has had a longer period of time to recruit the players to his liking than Beaty has.

“Obviously we went back to the very foundation of basic technique." Another tell tale sign that Clint Bowen's defenses are not up to par. Why would you recruit players who don't have basic technique down? I've seen this line uttered by more than one coach at Kansas over the years. Why does basic technique keep popping up as an issue? If you've been with the program for one or two years, or if you've been in juco for a year or two, shouldn't you already know basic technique? I understand some of the issue is the dearth of talent at a program like Kansas, but at some point you have to hold the coaches accountable. They are making a lot of money to teach these kids how to play and should demand excellence. I understand the years of turmoil in this program might make that difficult, but there has been one common denominator for several years. Clint Bowen. Any other P5 program would have replaced him by now.

If you can't teach kids how to tackle you shouldn't be coaching defense. It's not hard at all to tackle, you have to wonder if Kansas even practices tackling. When do you ever see a Kansas defender break down when they are about to tackle? All I see is them flying there bodies at someone out of control and tackling the grass or turf of the field.

In the 48 years I've been attending KU football games, today was the all time low. It started with the incredibly slow pace of the Rock Chalk chant and went down hill from there. I was particularly disgusted with the drowning out of the band by the noise pollution blaring out of the big TV.

We heard all week how the team had used the bye week to work on fundamentals. Wow, good thing we didn't have two weeks off! It was glaringly apparent, all too late for this season, that we've been playing the wrong quarterback. I have heard that Stanley was hurt earlier this year so maybe this was out of necessity.

Bowen has got to go and go quickly. Zenger should be shown the door at the same time. If this were a floundering corporation and you brought in a CEO to right the ship, would it really be acceptable to have these kinds of results after six years? Forget the silly stadium renovation project. It will just look that much worse to have 15 thousand fans in a fancy new stadium.

Lastly, lose the white helmets and all of the other non-traditional gear. This team needs focus. While changing uniforms every week seems harmless, its a sign of how inconsistent the program is.