Kansas running back Khalil Herbert (10) falls into the end zone for a touchdown to end the game on Saturday, Sept. 16, 2017 at Peden Stadium in Athens, Ohio.

While the addition of offensive coordinator Doug Meacham to the Kansas football staff hasn’t yet translated to more victories, the Jayhawks’ current version of the Air Raid offense has proven more effective than the 2016 model.

Through four games a year ago, when Meacham still worked for Gary Patterson at TCU, the KU offense floundered, averaging just 353 yards — 102nd among FBS programs.

Now that Meacham is in charge of calling plays for Kansas, the offense, entering Game No. 5, has jumped up to 480.5 yards a game, which ranks 23rd nationally.

The man who hired him, third-year head coach David Beaty, cited the offense’s comparative improvement when asked to address the self-scouting the team did during the bye week.

“We've had the ball a lot longer, we've had a ton more first downs, we doubled our rushing production,” Beaty said looking at the numbers, side-by-side. 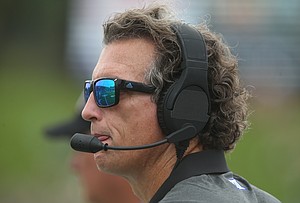 Comparing those referenced statistics through four games, Kansas has improved from 25:33 to 28:05 in time of possession, gone from 68 first downs to 93 and seen its rushing yards per game leap from 91 to 173.8.

That ground success, of course, stems from back-to-back monster outings for sophomore running back Khalil Herbert, who followed a 137-yard day at Ohio with 291 yards in a home loss against West Virginia.

“Khalil has played real well. You’ve got to attribute a lot of that to the O-line. They block extremely well,” Bender said of Hakeem Adeniji, Andru Tovi, Mesa Ribordy, Chris Hughes and Zach Hannon. “Coach Meacham’s had some good blocking schemes in for us, which have been very beneficial. But the run-threat always is going to open up the passing threat through play-action and all of that.”

“The more effective we can run the ball the easier it will make the passing game, keep the defense off guard,” Bender said. “They have to respect the run. It’s definitely going to help us moving forward.”

Meacham’s offense hasn’t been the primary factor in three consecutive losses for Kansas (1-3 overall, 0-1 Big 12). On the season, the defense has surrendered 39.8 points per game (122nd nationally) and 482 yards an outing (117th).

Beaty thinks both sides of the ball would benefit from the defense coming up with more takeaways. Thus far, Mike Lee and Hasan Defense each have one interception. Josh Ehambe recovered one fumble on defense and receiver Chase Harrell came up with another on special teams.

“The difference is we haven't got near as many turnovers — we haven't taken them away. If we did that, I think that's the difference in averaging 32 a game and averaging 45 a game,” Beaty said. “That will be something that can help us, so we spent a lot of time in the bye week creating extra possessions in one way or another.”

With 10 total takeaways (five fumble recoveries and five interceptions) and only three giveaways, Texas Tech (3-1, 0-1) has a plus-7 turnover margin, which ranks sixth-best in FBS.

No matter how much the running game helps, if we have a quarterback who can't consistently complete passes to wide-open receivers (especially short passes), we won't be able to win. It would also help to have a QB who could run and/or scramble at least a little bit.

Carter Stanley could make a bigger difference than anything else at this point.

Bender is not the biggest issue. KU is averaging 32 ppg this year. That's more than enough to win some games with even a below average defense. The defense not getting key stops and not getting turnovers are the much bigger issues.

Bender isn't perfect, but the offense is actually productive this year with him at the helm and he's getting better every week.

I agree that our defense is the biggest issue, but I don't agree that Bender is improving week to week and our best option at QB. Yes, our offense is much better and he has thrown for over 300 yards a game, but his completion percentage is 57% and he's thrown 7 interceptions. That's more than 1 a game. Not good when we have 1 FCS team, and 2 MAC teams on our schedule. Also note, we've been playing from behind most of our games which will lead to more pass attempts, which can explain his 300 yards a game. I don't know if Carter Stanley is better, and he may not be, but I think it makes since to give him a shot. He can extend drives with his legs and hopefully keep the defense off the field longer. Because as you said, that's our weakness, and to be honest it's not going to get any better.

Since Beaty doesn't discuss injuries there's no way to know whether Stanley's hand is in shape to consistently pass during the entire game or not. Bender simply needs to get rid of the ball quicker.

Hypothetically - would it be possible to do any worse?

If he wouldn't be trusted to hire Bill Self's replacement, then why is he allowed to hire anyone?

Get a D.C. and this program will start to develop in the right direction.

Read Keegan’s article. Offense is better once they are already down 3 scores by the second half. Bad starts are killling us and that’s up to Meacham to change. Better numbers are great but not when most of it is when down by insurmountable margins.

Think about this...once a team gets up by 3 scores, how often does the defense then shift to just containing the opposing offense...become for bend but not break. That would explain the offense suddenly getting things turned around after getting down big. Opposing defenses instinctively move from attacking to just keeping everything in front of them.

But we trailed most games all of last season by more than 3 scores and still finished 102nd in offense. So the fact that we're moving the ball and scoring after we get down big is still an improvement from last year. It's still not where we need to be, but it's something. Improvement on defense is going to be key if we want another win this season. And some early offensive success to keep the defense off the field longer might help too.

There are 129 FBS schools in the country, right?

On the season Bender is completing 57% of his passes with 7 TDs and 7 INTs...against mostly non-FBS competition. That's garbage.

Get Stanley in here and let's see what he can do.

Stanley is not a good quarterback for the Air Raid. Period. That's why he is not playing.