The cheers, clapping and tears after the match were to be expected.

Mele Havili, mother of KU senior setter Ainise Havili, strolled the sideline. Fans approached her simply to tell her how much they appreciated her daughter. The holdovers in Horejsi Family Athletics Center chatted amongst themselves, waiting for the No. 14-ranked Jayhawks to emerge from the locker room following the post-match conversation.

There was only one thing missing. 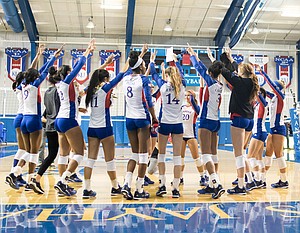 Sure enough, on a day set aside to honor the seven seniors, the Jayhawks came up short.

West Virginia’s Erin Slinde tallied the decisive kill in the fifth set and the rest of the team burst onto the floor. On the other side, the moment was just setting in.

Madison Rigdon, a stoic senior, had tears in her eyes. She tried to wipe them away with her jersey as the senior day festivities began.

Tori Miller put her hand over her face. Taylor Alexander, Addison Barry and Kayla Cheadle stood closest to Bechard, all three showing the emotion of what the day meant to them.

The same was true for Ainise, who looked off in the distance with a pained look.

For Mele, the meaning of the day to her daughter was never as defined. Although Ainise’s intensity in making some of the biggest plays for her team never wavered, her mother saw a different side.

“She keeps it in. I really don’t know,” Mele said. “She doesn’t really talk, express herself too much to us. What you see on the court is her personality.”

Contrast that with the scene on Saturday.

Asked about Ainise’s “reserved” off-court personality, Kelsie Payne, perhaps as close to her as anyone on the team, repeated the word back with a hint of incredulity.

Rigdon, who stood next to Payne, seemed to understand it a little more.

“I saw a tear or two from her,” Rigdon said. “I think she was more angry than anything. ... She didn’t want to cry because she was so upset.”

All in all, there was more to the day than just its ending.

Even removing the positives from Saturday’s match — KU tallied 10 more kills than West Virginia (18-12, 6-10 Big 12) and did so efficiently — Bechard noted it might be difficult, but it was important to look back on the day with regard to the seniors’ body of work.

That was no more true than about five seconds into the match when Payne smashed her first kill of the day. In doing so, she set the program kills record, passing Josi Lima, who tabbed 1,483 from 2002-05.

“That was fun,” Payne said of the on-court mob following the point. “They were like, ‘You got it!’ and were, like, squeezing me and pushing me.”

Perhaps most importantly, despite how the 13 service errors and inopportune mistakes on Saturday made Bechard feel, they aren’t without a chance for reprieve.

Though the regular season is over — KU finished 22-7 (11-5 Big 12) — the Jayhawks will almost certainly be safely in the NCAA tournament field, though they have somewhat jeopardized their location with lackluster play down the stretch.

Although that seeding is far from a certainty — “Certainly this didn’t help us,” Bechard said — there’s still plenty of volleyball to come.

“They’re disappointed, but we’re going to play next week somewhere at sometime, and we’re going to value that opportunity,” Bechard said. “If you could go 2-0 next week, people probably won’t remember this very much.”

Once you've almost reached the top of the Volleyball World, it's much harder to stay there. Good Luck, next week.

Nu and Creighton do a good job of keeping successful with a MILLION fewer people in their state.

This team has chemisty issues to go along with the injuries. That Final Four banner will get Bechard to retirement as Kansad coach.

I totally love these girls (all of them, but most especially the seniors), and truly appreciate their contributions.

But, seriously, who could have anticipated that they'd be sitting on five in-conference losses at this point? I'm glad I didn't have an opportunity to get a wager down at the beginning of the season. I'd have bet the farm that with Havili, Payne, and Rigdon playing in their senior years, the team might have been undefeated in Big 12 play, or maybe have one or two losses at the most.

As Waylon says (either knows or speculates), the team likely has some chemistry issues, and that's sadly disappointing. Still, the season isn't over yet, so here's hoping that whatever's holding them back can somehow magically get resolved in a hurry. Good luck, ladies!

Lets hope they play better in the tournament. I have faith in them!