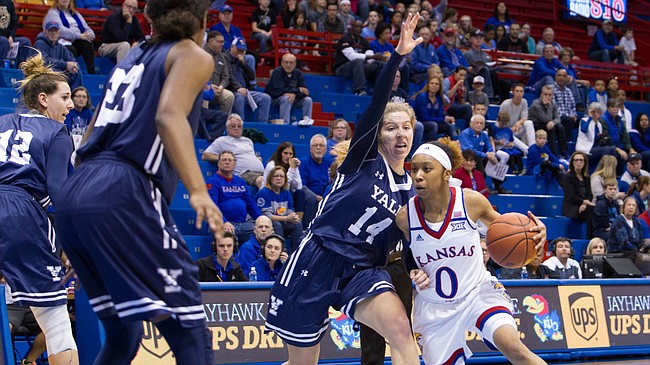 The sound of the final buzzer following KU’s 81-75 win over Yale brought joy to many of the 1,918 fans in Allen Fieldhouse on Sunday. Six-year-old Cole Schneider was not one of them.

Cole, son of KU coach Brandon Schneider, was the first person to greet his father after the game. The younger Schneider didn’t come bearing words of congratulations, though, instead grilling him about the happenings from the last two-plus hours.

“How many turnovers did we have?” Cole asked his father.

“So it was pretty obvious what our issues were today,” Brandon later admitted.

Dealing with turnover issues all game, KU found itself in a down-to-the-wire, grind-it-out contest against Yale, despite holding the Bulldogs to just 33.8 percent shooting and outrebounding them, 52-38.

The Jayhawks (3-0), who trailed by as many as six points on the afternoon, trailed late in the third quarter before a layup by Brianna Osorio (9 points, 6 turnovers) and a 3-pointer from Kylee Kopatich (17 points, 7 rebounds, 5 turnovers) put them ahead for good.

KU was led in scoring by Christalah Lyons, who tallied 18 points, but also 6 turnovers.

That mentality didn't apply to everything, though.

One thing the Jayhawks hope to see recur was the play of Micaela Wilson. The freshman logged her first action of the season in a blowout win over Texas Southern and played a much more crucial role on Saturday. Perhaps it should’ve been obvious it was her day, given the way it started.

With KU ahead, 10-9 midway through the first quarter, Wilson received a pass from Lyons and pulled up for a left-corner 3. The ball kissed off the glass and, despite the angle making such a thing seem impossible, fell through the net.

The moment of levity in the post-game press conference was just about the only time Wilson smiled. The freshman carried an intense look as she made some of the game’s biggest plays.

The Jayhawks only led by 2 when Wilson returned to the floor with six minutes remaining in the second half. After a ball was deflected out of bounds, KU only had nine seconds to work with on the shot clock.

The ball was inbounded to Kopatich, who redirected it to forward Bailey Helgren at the high post. Helgren, who made her first start of the season on Sunday, turned and passed it to Wilson, who buried a 3 with just two seconds remaining on the clock.

Wilson held her icy stare as she ran back on defense.

Wilson finished the game with 14 points, 10 rebounds and 3 assists in 20 minutes, recording the first double-double of her career and the first by any Jayhawk this season.

Schneider credited Wilson not only for her shooting, but also for her rebounding when KU went to a 2-3 zone, as well as her playmaking against Yale’s pressure-zone, which caused all sorts of problems for the Jayhawks.

“It’s nice to see her not feeling like the moment is too big,” Schneider said.

“She stepped up to the plate,” Lyons agreed.

As for the turnovers, both Lyons and Wilson made it clear they heard their coach’s message, both in the locker room and again afterward.

The two took a seat in the back row of the blue folding chairs in Allen Fieldhouse's media room while waiting for their coach to speak to the media. After Schneider was done fielding questions, it was Lyons' turn to speak to the effort.

“We made a couple crazy decisions,” Lyons said. “All we can really do is learn from that.”

This group looks like it could really grow and mature into something special. Pulling for Schneider and the girls.

LJW has been short on stories this summer. Hopefully it is picking up and with more good news. Keep going ladies, there is room in our hearts for all of you!