Other than the players and coaches who occupy the Kansas locker room, there might not be a single person who follows college football who expects the Jayhawks to beat Oklahoma. Earlier this week, KU chancellor Douglas Girod endorsed third-year head coach David Beaty and his long-term vision for the program. So there couldn’t be less pressure on the home team, considered a five-touchdown underdog.

“We've got everything to gain this week. Lots of opportunity,” Beaty said.

That’s not to say the Jayhawks expect the Sooners, currently ranked No. 4 in the College Football Playoff rankings, to overlook KU. Too much remains at stake for Oklahoma and potential Heisman Trophy winner Baker Mayfield. Kansas redshirt junior defensive tackle Daniel Wise thinks the Sooners will bring their A-game to Memorial Stadium.

“I do expect to see that and I wouldn’t expect anything less than the best. That’s what makes college football so great. Any given Saturday,” Wise said.

On a nine-game skid compared to OU’s five-game winning streak, the Jayhawks have nothing to lose.

On this episode of the KU Sports Hour, hosted by KU football beat writer Benton Smith, the KUsports.com staff discusses KU’s 42-27 loss to Texas. Topics include: what went wrong for KU (open-17:25), 4th down and red zone strategy (17:25-25:15) and a massive edition of the KUsports.com football mailbag — ...

“But it's a really, really big stage,” Beaty said. “This is a terrific football team that's coming in, and we've got a great opportunity. We've got a really great opportunity, and our guys are excited, encouraged and confident heading into Saturday.”

KU’s offensive line lost plenty of battles at Texas a week ago, when the Longhorns sacked QB Carter Stanley four times and delivered punishing hits countless other. The O-line’s matchups won’t get any easier with Oklahoma coming to Lawrence — especially with the status of banged-up starters Andru Tovi, Chris Hughes and Clyde McCauley III unknown.

Kansas offensive coordinator Doug Meacham issued a bit of a challenge to his linemen, saying “I don’t know if we can block 31.”

“He’s the best edge-rush guy in this league, period,” Meacham said. “He’s more of a Von Miller type,” the coordinator went on, referencing the former Texas A & M and current Denver Bronco sack artist. “Not as big as that, but he’s explosive.”

Even if the Jayhawks can’t deliver their small senior class the biggest upset of the college football season in their final home game, they could honor the veteran players by giving powerhouse Oklahoma their best fight.

Prior to kickoff, KU will recognize seniors defensive end Kellen Ash, defensive tackles DeeIsaac Davis and Jacky Dezir, running back Denzell Evans, tight end Ben Johnson, punter Cole Moos and offensive lineman Kyle Pullia and Jayson Rhodes. Junior Keaton Perry, currently a receiver and formerly a backup quarterback, will be part of the senior day ceremony, too, because he is on pace to graduate and decided not to return for 2018.

Only six seniors appear on the KU two-deep, so the group will be relying on their younger teammates to make the game memorable.

The only senior starter on the team, 6-foot-5 tight end Johnson has the greatest chance to impact the contest. After redshirting in 2013, his first year on campus, Johnson has seen Kansas win just six games and lose 40 during the course of his college career.

“These times haven’t always been the easiest but we’ve come out on top and I think that speaks volumes of our character,” Johnson said of KU’s seniors. “The last five years I feel like I put my entire life in this thing. It’s had its ups and down, but I can definitely look back and say I’m proud. I made it through that and I succeeded.” 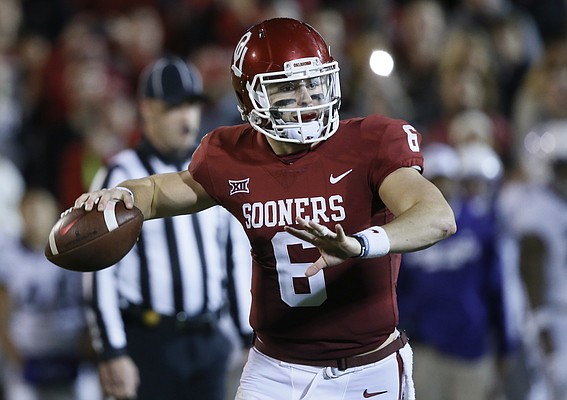 Baker Mayfield vs. everybody

In the running for the Heisman each of the past two seasons, Oklahoma senior QB Mayfield might finally win it this year. Nothing would help his cause like putting up gaudy numbers against Kansas.

So far this season, Mayfield has completed a nation-leading 71.2 percent of his 299 pass attempts, with 31 touchdowns and five interceptions. His 202.1 pass efficiency rating leads all Power 5 quarterbacks by a long shot, after he set the FBS single-season record in 2016, at 196.4.

Oh, yeah, and Mayfield leads all FBS players in yards per attempt (11.9) and yards per completion (16.7, which would be a new FBS single-season record).

“I mean, he's one of the best players I've ever seen,” Beaty said, “and I've been around a bunch of them. But this kid is very, very talented. He's one of them guys that he makes you turn the TV on. Whether you like him or not, you're going to turn the TV on and see what he's going to do this week.”

According to Beaty, Mayfield’s feats don’t end with his passing.

“I can't count how many times people hit him right there out of bounds and they fall to the ground and he stays up. I mean, he is a very strong guy,” Beaty said. “Just a ridiculously quick release. Him and Coach (Lincoln) Riley working together, boy, that's a hard, hard combo.”

Kansas defensive coordinator Clint Bowen called Mayfield the “most dangerous” QB he has seen this season.

“You can’t hardly get to him in the pocket,” Bowen said, saying Mayfield, like former KU star Todd Reesing, seems to have eyes on the sides of his head that allow him to step up and stay alive. “It’s hard to get to the guy. His awareness of what’s going on in a game is really impressive.”

Any mental or physical mistake made by KU’s defense, Mayfield likely will find a way to expose. From the defensive line to the secondary, the Jayhawks will have to put together their strongest performance of the season to keep the game competitive.

“He’s really good at doing pretty much everything,” Bowen added of Mayfield. “He can sit in the pocket. He can throw. He can scramble and run around forever and throw; he can scramble and take off and run. He is a little bit of a threat in the QB run game that they use.”

Despite four first-half turnovers this past week at Texas, the Jayhawks never felt completely out of the game until late in the fourth quarter. They’ll need that type of resolve once again versus a much better Oklahoma team.

If there’s one feature of KU’s previous defeat that the players should try to duplicate, it would be rallying around their quarterback, redshirt sophomore Stanley.

The QB took some serious hits behind the line of scrimmage at UT but kept bouncing back up.

“Carter, I can't say enough about this kid's toughness and how it permeates throughout our team,” Beaty said. “He's not playing mistake-free, but his play inspires us, and that's something that you look for in your quarterback. I say it all the time: Fortune favors the bold, and that boy is certainly bold. He is a very tough individual, and I wasn't joking when I said he was bleeding from just about every part of his body (at Texas). He just literally, he's just got a toughness about him. I like that kid a lot.”

Toughness, inspiring plays, determination. The Jayhawks need all of those and then some from Stanley and each of his teammates against Oklahoma.

David Beaty comments on 'unexpected' message of support from chancellor by KUsports.com

The first team to seventy wins the game.

0% chance of rain and 0% chance of winning. Is it too early to ask for that running clock?

I still think that ringing endorsement is about 10 days away...too many poor decisions by Beaty.

"Lots of opportunity", what to see if we brought our track shoes. Beatys comments are just plain dumb. Will we play smart or play the way we think we will which will lead to a 56-10 margin or worse!

Incredibly windy here today - special teams will be heavily impacted, as will the passing game. It might be a bit more methodical for OU due simply to the weather.

Cold and windy, I predict 10,000 or less in the stands. That's what you get when you build things the right way - according to GZB. Just think, though, if they keep going this way, they could expand the indoor practice facility just a bit and just play the games indoors from now on. At least you might be able to hear the band over the sonic attack of the scoreboard.

I hope all the negative Debbie Downers don't even watch the game. Being frustrated is fine... I tip my hat to the KU football fans who are actually at the game, rather than focus on those who are not. You same naysayers will want a new coach.. and then after 2 years, if he isn't doing any better... you will ask for his head too. Am I optimistic about the OU game? No,... but I'm supportive of the team and everyone out there who is busting their ass to make it a game. It's senior day for Christ sake... you almost seem to be rooting for less people in the stands. Our coach is our coach this season.. and this is our team... support them. If you want to bitch, then do it in the OFFseason. Again... with this being Senior Day.. notice in the article that we only have 6 seniors two-deep at the roster positions. That's all the help Beaty and Co inherited... most of those 6 don't even start.

Hey Kansas........what is with the Red uniforms?? Oklahoma's colors are crimson and cream. Kind of strange.....what happened to blue??