The Kansas football team committed four turnovers in the first half Saturday and lost its 45th consecutive road game against Texas, 42-27, at Darrell K. Royal Stadium.

Once again, the Jayhawks fell into a major hole by halftime and couldn’t create enough offense in the second half to mount an upset bid. Receiver Chase Harrell scored the team’s only touchdown in the last two quarters, an 18-yard catch with 11 seconds remaining.

KU (1-9, 0-7) quarterback Carter Stanley was 27-of-43 passing for 268 yards, three touchdowns and three interceptions, including one takeaway that was returned for a score by Texas defensive back Antwaun Davis. Evan Fairs had seven catches for 104 yards, while Steven Sims had nine grabs for 53 yards and a TD.

Stanley led the Jayhawks with 43 rushing yards, while Taylor Martin had 12 carries for 37 yards. 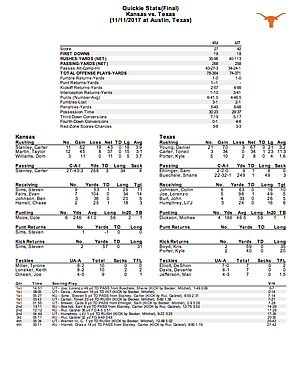 • The game turned when: Trailing by 11 points in the second quarter, 28-17, the Kansas defense held the Longhorns to a missed 44-yard field goal attempt and a 3-and-out punt on back-to-back possessions.

Before the Kansas offense could try to cut into its deficit, junior receiver Steven Sims lost a fumble on a punt return. Sims signaled for a fair catch, but the punt from Michael Dickson went through his arms to the turf, eventually recovered by UT’s Antwaun Davis.

After recovering the ball at the 22-yard line, Texas converted a pair of fourth down conversions before Lil’Jordan Humphrey found the end zone on a 1-yard run for a 35-17 lead.

• Offensive highlight: Playing about two hours from his hometown of Fulshear, Texas, Fairs secured one of the toughest catches of his young career near the end of the second quarter.

With the Jayhawks trying to cut into their 18-point deficit before halftime, Stanley tossed a high pass toward Fairs’ back shoulder along the right sideline. Draped by UT cornerback Davante Davis, Fairs leapt over Davis and pulled down the highlight grab with both hands at the 17-yard line.

Unfortunately for KU’s offense, it couldn’t make the most out of Fairs’ grab. Stanley was intercepted in the end zone four plays later.

• Defensive highlight: Early in the fourth quarter, Kansas junior cornerback Hasan Defense provided a spark when he intercepted a pass from Texas quarterback Shane Buechele. Defense, who appeared to be in zone coverage, jumped up to grab the ball on an out route.

It was Defense’s second interception of the season — and only the fourth for the entire defense (the unit, not the player).

• Key stat: Points off turnovers. The Jayhawks turned the ball over four times and were repeatedly punished for it. Antwaun Davis had a pick-six in the first quarter and Texas’ offense took advantage of strong field position after another interception and a muffed punt for a pair of scores.

On the other side, Texas committed two turnovers and KU turned it into three points.

• Up next: The Jayhawks will return to Lawrence for their final home game of the 2017 season. KU will meet Oklahoma at Memorial Stadium still in search of its first Big 12 victory of the season.

Still love this team. This one hurt. You could tell they were playing their hearts out.

Our players are really trying and unfortunately sometimes turnovers happen. No victory but competitive. Beaty just needs to recruit better players. Changing coaches won't turn over to victories. Give Beaty a chance.

Give him a chance? Turnovers happen?

It's year three. We are the worst team in major college football. Give him a chance to do what? Absolutely, completely destroy the program?

Agree! Just because we beat the point spread in yet our 2nd game doesn’t mean progress. Leading nation in turnovers still safe.

Our offensive line is just awful. Without a running attack our quarterbacks all look inaccurate and underwhelming. Please also, stop the bubble screens. They are worthless. How many times did UT blow them up? What a sorry program after some very poor hires by our last two ADs.

Agree, bubble screens, with no vertical game, are a ridiculous way to set up interceptions. Also, devise rollouts, and some quarterback runs for Stanley. That is when he is at his best. He is very mediocre as a pocket passer. He gets intercepted, because the coaches want him to throw passes he cannot do. So, dammit, how about using what he can do. That's what drives me crazy about this staff. They do not use the talents the players have. Design your offense and defense aroud assets, don't make the team play to their weaknesses.

They've been running those bubble screens or throwing the sideline pass (which take forever to develope) since year 1. Has it ever worked? Does Beatys idea to onside kick to start the game count as a turnover? May as well. If he had known the D would play as well as they did and the Texas offense struggled at times that TD may not have happened with a regular kickoff and Texas has a long field ahead of them. But with Haasan (No) Defense covering maybe it would have anyway. Bad O line bad QB Bad Special Teams some games. Even with a new coach or staff would theys really be any better? I agree to get Carter on rollouts. designed runs, short passes in front of him anything over 15 yards makes me nervous. It's not just the bad O line he misses open receivers as well when given time. Yes his receivers drop passes l know, but he is inaccurate alot of the time.

Stanley would be a backup on an fcs team

Yes, Beaty's idiotic plan to open the game - which literally has no viable explanation - should count as a turnover: in coaching staffs.

The decision to onside kick to start the game counts as taking a chance at catching the opposing team napping for a huge momentum gain when you are a big underdog. It is exactly what some people hear have criticized Coach for not doing in the past. It is only idiotic and without explanation if a person has predetermined that any action by this staff is wrong.

It is definitely true that until the Online improves, there won't be much progress regardless of who is leading the program.

Coaching can obviously make a difference, but many of the mistakes being made are not a matter of coaching.

Poor coaching cost the Jayhawks....I believe should be the title of the article.

Maybe one day he will take a step or two...one day? I hope 'Sooner' than later at home.