The Kansas men’s basketball team officially has its point guard of the near future.

With Frank Mason III now playing in the NBA and Devonté Graham playing his final season as a Jayhawk, KU coach Bill Self knew he needed a lead guard to replace them and zeroed in on Devon Dotson, a five-star point guard from Charlotte, N.C.

The 6-foot-2, 175-pound Dotson orally committed to Kansas during a ceremony at his school on Oct. 13. On Saturday, he made that commitment official by signing his national letter of intent to join the Jayhawks.

“We recruited three or four lead guards in the country this past year, knowing all the perimeter players that we’ll be losing,” Self said in a press release. “We felt like Devon had the highest ceiling of the guys that we were recruiting.” 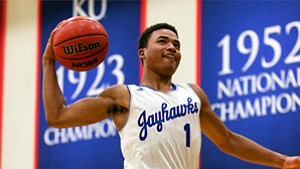 Ranked No. 17 in the 2018 class by Rivals.com, Dotson becomes the first official KU signee in a recruiting class that is ranked No. 2 in the nation by Rivals. Big men Silvio De Sousa, who is exploring the possibility of coming to KU early, and David McCormack also are expected to send their letters to KU before the end of the early signing period next Wednesday.

While he waits for those letters, Self elaborated on what he liked about Dotson.

“He’s an explosive athlete,” Self said. “He’s very unselfish. He can make plays for others, but he also has plenty of explosiveness that he can make plays for himself. And even though they are different type players, in some ways he will remind people of Frank because of his ability to get into the lane.”

Self called Dotson “one of the most explosive guards we’ve had since I have been here at Kansas” and credited assistant coach Norm Roberts for his role in Dotson’s recruitment.

As a junior, Dotson averaged 24.4 points, 6.8 rebounds and 5.1 assists per game at Providence Day School for coach Brian Field.

As a sophomore, Dotson helped guide Providence Day to the 3A state championship and, this past summer, he averaged 19 points, 5.2 rebounds, 3.4 assists and 2.5 steals per game for Team Charlotte AAU.

Welcome. I hope you enjoy multiple championships at KU!

Welcome to the Jayhawk family, Mr. Dotson! I believe you will lead us to another nat'l championship title next year!

You're dreaming if you think a freshman is going to lead us to a national title. But he might lead us to a title if he stays around a few years - that is, if Bill Self can figure out how to win Elite Eight games...

...or if Bryce can figure out a way to say anything positive.

I think the 'ship will come first.

How many times do we have to cover this? Bill Self's record in the Elite Eight is an unsightly 2-5 (2-7 if you count his days at Tulsa and Illinois). Four of those five losses came with KU seeded #1. The first time he won, he backed into the Final Four more than he won it - thanks to a missed Davidson three-pointer at the buzzer. The second time he won, it happened only because UNC was missing its point guard. You cannot deny that the Elite Eight has, all too often, been too big of a stage for Self.

That's still a better record than you have on saying anything positive so regardless of KU's E8 record, Joe Ross' statement stands.

Are you seriously under the assumption that bringing up the E8 record constantly is going to somehow take the pressure away from the players and get them to make some shots in E8 games? How about bringing it up in the "welcome to KU Devon" article...do you think pointing out to him that our E8 record isn't great will make him not feel pressure in those games or do you think maybe NOT pointing that out to him would go farther towards ending that streak?

This is my pet peeve:

"...also are expected to send their letters to KU before the end of the early signing period next Wednesday."

Yeah, yeah. I know it has little to do with the point of the article. Dotson is officially a Jayhawk. That's glad news. Maybe he'll be excited to watch the KU-Kentucky game this Tuesday.