Nearing the conclusion of his third year in the Kansas football program’s ongoing reclamation project, head coach David Beaty said following the Jayhawks’ home loss to formerly winless Baylor that the Bears were in “nowhere near” as bad a situation in the first year under coach Matt Rhule as KU was two seasons earlier, when he took over.

According to Beaty, the team he coached in 2015 season was down “30-plus scholarships.”

So how many scholarship players is Kansas up to right now?

The Jayhawks’ head coach declined to answer that question Monday morning during his time slot on the Big 12 coaches media teleconference.

“You know, there’s a couple of different numbers there and I would prefer not to talk about it publicly,” Beaty began. “And the reason I say that is every one of our players are of value. And I don’t care what they came here as. They're ours. They belong to us and our job is to develop them; develop them and get them ready.”

Although Beaty has opted during signing day press conferences not to identify some players as scholarship athletes or walk-ons, he seemed to be more forthcoming on those numbers in recent months. At an event for KU football supporters this past June, Beaty said he hoped to have around 76 scholarship players in place this season.

Four weeks ago, during his weekly Hawk Talk radio show, Beaty said KU had “about 84” players on scholarship — one below the NCAA maximum of 85 — while making it clear an unspecified number of those belonged to Jayhawks who entered the program as walk-ons.

“Our administration has been phenomenal. The entire team has been really, really good in terms of trying to help us solve that roster issue,” Beaty continued Monday, after turning down a chance to address the current number of players on scholarship. “And we’ve worked together to do it. We’re not quite there yet, but we do know that the plan is in place. And it will take us a little while to get it done, but we will eventually get it done. And I think the thing I really am most proud of is the help that our administration would give us and then the culture we’ve been able to create with the guys that we have there.”

KU’s scholarship numbers took significant blows prior to Beaty’s arrival, with players leaving for various reasons as the program transitioned from head coach Mark Mangino, to Turner Gill, to Charlie Weis to Beaty. How can an administration help a football program trying to get back to full strength in that department, exactly?

“There’s a lot of things and a lot of pieces that go into place in terms of research and how you manage things that you can control,” Beaty said. “What do you control? What you control is the ability to sign 25 players a year. That’s what you control. From that standpoint, once you figure that out, then sitting with your administration and sitting with some of the people that are amongst our university and trying to come up with a great plan to close the gap faster than the normal 25 would allow you is really, that’s where the work had to be done. And being able to manage that. If I had to do it alone, it would’ve been a much tougher job. But they’ve been very supportive.”

Asked how many players KU currently has in place, scholarship or not, Beaty said: “We’ve got probably 104, something like that. Maybe 103.”

As of Monday afternoon, the Kansas football team’s online roster listed 109 players, but included the names of some inactive Jayhawks, such as Octavius Matthews, who retired because of health concerns, and Charles Baldwin and Derrick Neal, who haven’t suited up for recent games, as well as those whose injuries will keep them out for the season, such as John Wirtel, Keaton Perry and Isi Holani.

KU’s active roster provided for media at the Baylor game this past weekend listed 84 players.

We’re no better at 84 or 76 scholarship players (whichever number Beaty chooses to use) than we were at 54. That’s the problem.

This guy has no idea how to be a head coach and build confidence in himself, his team or the program. He is a joke.

If I was a potential KU football recruit and viewed all the negative sports articles and poison pen posters, I would definitely be looking else where to other Division 1 and II programs to sign for 2018. You would have to have a lot of personal confidence or no other options to come here after all the negativity you see here.

Number 10 and number 9 recruiting classes prior to this year. That's my fault?

Sorry, but how are you even taking these stances still? In all honesty, on what factual grounds should Beaty be supported as KU’s future coach? The reason the players won’t come is the abysmal product on the field, which doesn’t have to be so. Not because of the honest evaluation on this site. If you can’t handle the truth, I feel bad for you.

David Beaty quote: "Uncle John, please stop trolling the KU football message boards." Hee hee. Actually, it is a very well behaved group on this forum, considering the state of KU football. They are just asking for the obvious.

And if I were a potential KU football recruit as a recruit I would be coming to take my un official OR official visit whichever you prefer - I wouldn't have to worry about all the negative sports articles or poison pen posters - -All I as a potential KU recruit would have to do is attend the GAME - -see the empty Stands - - - see the product that was on the field - -see them get their butt's kicked all over the field see the facilities in place and THAT would be quite enough for me, and say NOPE - -I'm out - -wouldn't have to do any of the things your talking about - -it's pretty obvious from what we & recruits are seeing on the field for them to make their on conclussions

An important note, virtually no program has a full 85 at any given time. Grades, dropouts, washouts, etc. A real number is probably around 80.

David Beaty is a good man and a great guy. No doubting that. He is just in over his head.

That’s a good way to put it. What I don’t like is how it seems as if he’s not sharing the recruiting number to keep it as a valid excuse for this season’s performance. Why not swallow your pride, say how many we’ve got and own it? People sympathize with honesty and appreciate when they get it. Maybe he’s in panic mode, but he’s not handling the PR side well. 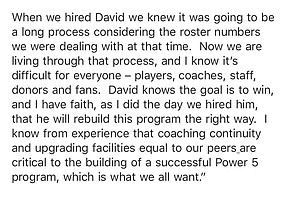 “You know, there’s a couple of different numbers there and I would prefer not to talk about it publicly,” Beaty began. “And the reason I say that is every one of our players are of value. And I don’t care what they came here as. They're ours. They belong to us and our job is to develop them; develop them and get them ready.”

I don't get this guy. How does saying how many scholarship guys you have affect the "value" of the guys? Beaty is clueless. Bottom line is year 3 in any conference anywhere should result in more than a single win. Period.

He is passive-aggressively suggesting that his players aren't very good, and the results are not his fault. That's how I read it. This is the first sign of panic I have seen from him. Like most, I thought of him as a good guy, but I'm beginning to wonder.

By not naming all the scholarship players he may be protecting the players who have been awarded schollies because of their hard work - players who, under normal circumstances would not be good enough to receive a scholarship.

If he can progress to the 85 schollies for legitimate D1 players many on the current roster will lose their scholarships. Those are the ones he's protecting by remaining silent. There's really no benefit in calling them out publicly.

This guy is so secretive. First the starting qbs and now the amount of scholarship players. The whole qb situation and not being able to announce a starter at the beginning of the year shows lack of confidence in your choice and pretty much dooms any confidence a qb would have!

Coach Betty does not speak the truth, he gives different answers to the same question asked by different media. All may be well with him....he apparently does not read ...which maybe the problem!

Shouldn't this be public record? He sure as hell isn't paying for the scholarships.

This whole debacle just gets worse by the day. Beatys Monday conference was a joke. Radio 810 spent a lot of time today discussing Zenger and Beaty and there isn’t a soul in the free world that believes he should be coach.

When it seems things can't get worse I like to look to history and see if things were ever that bad in the past. I think back to the time I was in school at KU and our coach was Bob Valesente. I went to the games if the weather was good to see the band, and sometimes the opponent had some exciting players. Bob went 4-17-1 at KU. He was a juggernaut compared to Beaty. Of course, we did get to play K-State once a year where Stan Parish was going 2-30-1, a 0.0625 winning percentage, ouch! If the rest of this season plays out as we think, Beaty will be 3-33, a 0.0833 winning pct. I did some research, and I could not find anyone who got a 4th year with that kind of record. The closest I could find was Ted Roof, who went 6-45 from 2003-2007 at Duke. We're talking historically bad here, folks!

This is just strange. I see this as nothing but a stance to not cooperate with the media. I too wonder if in fact this isn't a public record issue, so i would push back.

I wouldn’t be surprised to see the coaches break out the brown paper bags the rest of the season. Maybe that’s why we have so many players with the same number!

Why is Zenger still here?