Reality this weekend didn’t live up to the expectations Kansas football players and coaches had going into a matchup with previously winless Baylor.

In the wake of a 38-9 home loss to the Bears, junior KU linebacker Joe Dineen explained why such a result was indefensible.

“I think the town, the fans, I think they deserve a better performance from the players,” Dineen, a Lawrence native, said following his eighth double-figure tackling game of the year, “and I can’t really put it in words. But the fan base deserves for us to play better.”

Kansas coach David Beaty expected his team was prepared and skilled enough to defeat on Saturday a rebuilding Baylor program that had yet to experience a victory this season.

So what kept that scenario from coming anywhere close to playing out in an easy win for the Bears? 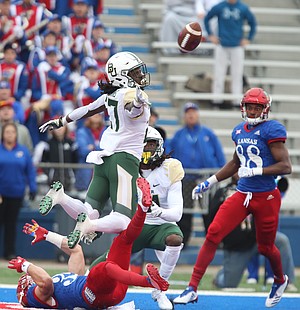 Beaty responded to that question during his abnormally brief post-game press conference in Mrkonic Auditorium by first figuratively taking his hat off to first-year BU coach Matt Rhule, who won his first game with the program.

“He had his team ready to play. I thought they schematically exposed us a couple times on some things that helped them. Their play-action pass, being able to hit (Denzel) Mims. We knew he was a great player,” Beaty added of the receiver who accounted for 122 of Baylor’s 335 receiving yards against KU. “I didn't think we defended him well at all (Saturday). We've got to do a much better job there.”

Mims was just one part of the problem. First-time starter and BU freshman quarterback Charlie Brewer picked apart the Jayhawks, going 23-for-29 through the air with 315 yards and three touchdowns.

“The other guys made plays. They hit us on a couple of tight ends down the middle that we're in position, all we've got to do is knock it down, if not be able to pick it, and we just didn't make the play,” Beaty said, referring to TD grabs by Jordan Feuerbacher and Ish Wainright. “And then there's another one where they slipped the running back out and he gets behind one of our guys, and those are things that you don't see very often, but you've got to be able to stop them when they show up.

As usual, Beaty looked for the positive attributes while addressing what went wrong. He credited KU’s defense with getting off the field a few times. Baylor punted on five of 12 possessions, but three punts came in the first quarter. The defense also got off the turf unscathed following a Ryan Schadler fumble in the second quarter, when BU kicker Connor Martin missed a 36-yard field goal.

“That was outstanding,” Beaty offered of the Kansas defense limiting BU to 27 yards on five plays after a turnover. “They kept battling until the very end. If there's anything that I do think is a nice part about it, it was that those guys kept fighting out there”

Dineen, though, described KU’s overall performance as “unacceptable” after Baylor “kicked our (expletive) for four quarters,” dropping the Jayhawks’ record to 1-8 on the season and 0-6 in the Big 12.

According to the redshirt junior captain, Beaty handled his post-defeat message to the team better than Dineen could.

“I just think he keeps his cool a lot better than what I would have. It’s getting hard for me to keep my cool. You know, the fans and stuff, they deserve so much better,” Dineen said after KU’s eighth consecutive loss. “We’re Big 12 football players and the product we’ve been putting on the field is unacceptable.”

After KU put up a fight against Kansas State the previous week, many Jayhawks planned to build off that showing versus Baylor. Another team captain, junior defensive tackle Daniel Wise, said he and his teammates enter every weekend with confidence.

“This is a game we should’ve won,” Wise said. “We’re going to go into the next game thinking we’re going to win, as well. We had every key to beat this team, but we just didn’t execute.”

After yet another discouraging result, Beaty explained how he would keep players’ attentions leading up to their next game, Saturday at Texas (5 p.m. kickoff).

Losing two defensive backs (safety/DB) from an inexperienced defensive backfield with very little depth let a Baylor freshman QB have a field day. Add to the 10 players who are out for the season and KU simply doesn't have enough Jimmy's and Joe's this season.

Yep, no other team in football has any injuries. That's your lamest excuse of the day.

Are u kidding me! Taylor has been avg at best and Lee went down with score 21-6 so no his injury did not affect the outcome yet Baylor started a third string true freshman at qb that threw for 315 ran for 33 and even caught a pass for 20. This team is ill prepared and doesn’t believe in what Beaty is selling.

Tell that to UAB who didn’t have a team last year or the year before... and they have 6 wins this year.

Going to a bowl!

Why don't we make a run at their coach? Honestly!

Joe doesn't need to worry about the fans, or his effort. This isn't a player problem, this is a millionaire problem. Incompetent millionaires who have trashed this program while enriching their bank accounts.

Zenger - extension with buyout. Zenger - gives Beaty an extension and massive buyout to provide Zenger with cover and make himself less fireable. Zenger - $10 million to Weis.

It's a clown show. The most expensive clown show in the history of clown shows. The only problem? It's the clowns that are laughing....all the way to the bank.

I wouldn't say it's the MOST expensive, but ironically Weiss was at the center of that one, too! This really is a joke, it's showing absolutely no signs of getting better!

Definitely no complaints about Joe. He's one of the best linebackers in the country.

Beaty's buyout is less than half the total value of his current deal. There's plenty of coaches out there who make more than Beaty's buyout.

I don’t think it’s any surprise the players have given up on this staff. They can see the lack of coaching ability and cluelessness of this regime easier than we can. After all they have to put up with it daily, not just on Saturdays. They deserve better, they deserve competence, they deserve a head coach and supporting staff that can coach them, lead them and put them in a position to have a chance at success. No way the talent on this team is not capable of much more than this regime has produced...no way!

The announcers said that Baylor had 25 players out for injury compared to 10 by KU. Although two going down, doesn't compare to what KU was struggling with. Baylor also has played or started 17 true freshman. People are making excuses instead of identifying the coaching issue.

Baylor beat a team on offense, defense and special teams. Every coach is being out coached consistently. Our players deserve better because they are more talented than they are being coached to be.

It's ironic that Joe Dineen is the one saying the fans deserve better, considering that he's probably been the best player on the team this year. He deserves better too.

And as for Beaty's comments, he talks a good game but everything he says is pretty much meaningless at this point.

Kansas Football Coaches and Administrators specialize in excuses. They have made it a fine art during the Decade of Despair.

I'd love to hear a reporter ask him "Is it possible that you just don't know what you think you know, about the program, what's wrong and how to fix it?"

This just kills me, because I do believe Beaty started at a ridiculous disadvantage, and any injuries we suffer are compounded by non-existent depth. But his team is not even competitive. Either the players are just THAT bad, or he is. I want him gone, and I also think he might be about to turn the corner (if his incoming recruits don't bail and he can figure out his OL). Ugh!

Joe Dineen is the kind of man you want next to you in a fox hole. Never quit, all-in for the team! He is one of an unfortunate rare breed of player that doesn't need a kick-butt coach to excel.

The young man will thrive after his football days are over.

He's a perfect example of why this idea that you have to go out and get big time 3-4 star recruits to have any chance at building a program is so misplaced. Get good kids that have some ability, with great attitudes and work ethic.

I can't believe there hasn't been an announcement. I thought it was six weeks ago due...now I'm confused that it has not occurred.

Time to put Girod on the Hot Seat.

I've heard around the horn that Beaty and Zenger are staying put for at least another year. It's Girod's first year as Chancellor and I'm assuming he just doesn't want to deal with football at the moment. The only way I see Beaty and Zenger getting fired this year is if a big time donor fronts some cash to cover their buyouts and threatens to stop donating if it's not taken care of.

How can Beatty say "they believe" I sit behind the bench. I don't see one ass chewing for blown assignments, I don't see one person being held accountable. You can watch the QB and receivers looking at each other with their hands in the air after a blown play. They just go back and line up and run another bad play. The play calling is not bad, it's that half the guys don't know the play. The tackling is absolutely horrible, the number of people out of position is astounding.

KU may not have the athletes, but we don't have the brains either. We should be sitting people when the blow a play and letting them know that they aren't good enough to start on the worst team in america! We should be chewing ass, running laps, doing push up, something. I have friends who watch practice and there is a bunch of "slap and tickle" going on. These people don't know what serious is.

Has anyone else notice the choreograph dances the coaches do before the kickoffs, on the 50 yard line. Makes me want to puke.

Can we please move in a different direction? Clearly this is not the staff of the future. I could even argue we have gone backwards in year 3. There is no shame in getting turned down by potential candidates. Also, don't tell me that firing coaches is the problem, it's that we make the wrong hires. Get it right for once and then I'll give it 5 years. The list below is in no particular order.

Give them a call and let's get to building: - Les Miles (Can't hurt to try) - Lane Kiffin (FAU) - Chad Morris (SMU) - Charlie Strong (USF) - Bill Young (UAB) - Bo Pellini (Youngstown) -Ed Warinner (OSU) - Mack Brown (I have a feeling he is itching to get back into it) - Jim Mclwain