Safety Mike Lee learned far in advance of this past weekend’s home game against Kansas State that, for the first time in more than a year, he wouldn't be starting.

The sophomore defensive back from New Orleans sat among his peers, watching video footage of what Lee described as his “bad plays,” on the Monday following the Jayhawks’ drubbing at TCU. It was then and there defensive coordinator and safeties coach Clint Bowen informed Lee, the team’s second-leading tackler, his numerous miscues meant Shaq Richmond would start instead of him versus the Wildcats.

“My facial expression was just the same,” Lee recalled. “I wasn’t really worried about that, because I knew I could do better than that and I could perform better.”

Because Lee understood the missed assignments and tackles that inspired Bowen to take away his starting job weren’t acceptable, the demotion began having its intended effect on him as soon as the ensuing practice. 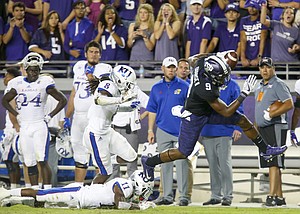 “Sitting on the sidelines watching players play and practice, that just motivated me, because that’s never really happened to me before,” said Lee, who had started KU’s previous 15 games. “It was just that feeling that I really have to work harder and push myself more and get in the game and make plays, and that’s what I did.”

Bowen anticipated a more focused Lee, because the alternative would involve a lot more watching and a lot less playing for the second-year safety.

“I don’t think he had a choice in how he was going to handle it. At some point in time you have to fix your mistakes,” Bowen said. “And if you don’t fix them there’s got to be some accountability for it. You cannot play safety in the Big 12 and tackle poorly. And he’s tackled poorly all year.”

Once Richmond played the opening series of KU’s 30-20 loss to K-State, Lee entered the game as a substitute focused on carrying out his assignments and making up for his past football sins.

Said Lee: “I was really going into the game thinking, ‘Don’t miss no tackles.’”

To follow through with that plan, Lee said he just tried to play with patience, fill appropriate gaps and handle his responsibilities correctly in various formations.

As a reserve, Lee contributed seven total tackles and two tackles for loss and played more than Richmond. His biggest play came late in the first quarter, when on fourth-and-inches at KU’s four-yard line, Lee ended a Wildcats possession with an open-field tackle of Alex Delton.

“Yeah, I mean, the thing is you either have to show that you're going to make those improvements because it's the way that it fits into the scheme, or we've got to go to the next guy that will show us that he can do that, right?” Beaty said. “And you'll have your opportunity to get back in there. When you do, if you show that you made those adjustments, then your playing time will tend to improve again, right? So that's kind of what happened Saturday.”

Earlier this season, Lee moved from what KU calls its “field safety” position to the other “bench safety” spot, closer to the sideline. That, too, played a part in him not living up to his potential as a defensive play-maker, as he adjusted.

“At free safety I really wasn’t getting a lot of action,” Lee said. “I was just covering guys and just playing way off the ball. So really they moved me to bench safety just to tackle more.”

The problem was that move hadn’t worked out, because Lee was either out of place or using improper techniques, defeating the whole purpose of the reassignment.

“The last few games I’ve been missing a couple tackles and that was costing a lot of yards for our defense,” Lee said, “so really that just made me prepare more and work more, and what I had to work on was tackling. That’s what I did.”

“He'll get there. He wants to do it, and he doesn't mind you coaching him,” Beaty said. “You can get after Mike and he takes it.”

A junior captain for the Jayhawks (1-7, 0-5), defensive end Dorance Armstrong Jr. liked how his teammate accepted his punishment.

“From him going in knowing he wasn’t going to be able to start, I think he responded well. All week at practice Coach Bowen made an emphasis on the way he tackled. He worked on it all week and came to the game and it was changed,” Armstrong said. “That’s a good sign. He responded well.”

“It’s a decision he has to make, if he’s going to fix it. He tackled a little bit better in the K-State game,” Lee’s coach said. “It needs to be his every waking thought, of how to tackle in the correct way.”

Lee respected Bowen’s decision, because he knows his coach wants to maximize his impact on defense.

“Yeah, really because most coaches at some colleges, they sit you on the bench, they probably won’t play you that much in a game,” Lee said. “They did me like that because they know that I would just come harder and work harder to perform better in the game.”

It seems Coach Bowen confused Lee one of the huge hitters. Misplaced him in his role and focused him on something else. Basically it sounds like great talent that has been undeveloped by one of the most over rated defensive assistants.

Don't worry Mr Lee, coach Beaty expects his players to be worse their second year over their first. He thinks it is because of others preparing, refuses to realize his players should be getting better year over year.

I don't see how Beaty survives. I thought he had to get rid of Bowen after week 3, when he didn't it'll cost him, Zenger and bowen.

Wow, man! The article clearly states the reason for the move was to bring him into more of the action. He is a tackler first and foremost and they want him to be in on more plays so they moved him. C'mon man, don't be such a negative nancy that your posts are completely irrelevant.

He switched him twice and benched him once. Mike Lee is one of the most talented players on the defense...If you think Bowen is doing any favors, think twice.

I applaud Coach Bowen for finally recognizing what I have been seeing from the stands and my couch all season. Mr. Lee likes the "Big Hit" and it seemed that if he could not make a highlight package play he wanted no part of it. He is a long way from being a technical tackler but maybe this small demotion will help him regain focus that this is a TEAM game and when he's 30 no one will remember how many highlight tackles he made. We will remember the number of wins and losses his teams had and did he contribute to turning the program around or not. Let's hope he can take advantage of this Baylor game to put TEAM ahead of SELF and contribute to a victory tomorrow.

18th season at KU and he finally realized something we can see on the coach.

Sitting Mike Lee paid off for KU last week regardless of end result. The kid came out the way we expected him to be all season. I think he just lost focus and has gotten caught up in everything. (Remember he is still 18 and should be a redshirt freshman right now or even arguably a freshman that is redshirting).

Hope to see him come with this intensity again this week. Got a lot of recruits in town and he is going to be the reason Devonta Jason and Corionne Harris become Jayhawks.

Who else can we sit? Seems to be a good strategy. If you aren't good enough to start a game for the worst Div 1 football team, you really suck.