KU and Adidas on Tuesday unveiled the "Jay-Hawkers" alternate football uniform, which will be worn in conjunction with the program's annual Salute to Service weekend.

When the KU football team pays tribute to the Sunflower State’s Civil War heritage in this weekend’s game against Baylor, they’ll also be honoring a Kansas abolitionist fighter with a murky and criminal past.

KU and Adidas earlier this week unveiled the “Jay-Hawkers” alternate uniforms, to be worn in conjunction with the football program’s annual “Salute to Service” weekend honoring military personnel, veterans, first responders and their families. 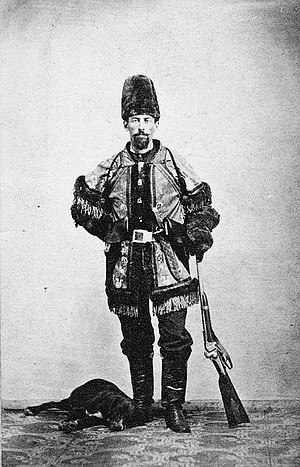 Kansas abolitionist fighter Col. Charles Jennison is pictured in this photo circa 1855-1860.

The uniforms take their inspiration from Col. Charles Jennison and his Seventh Regiment Kansas Volunteer Cavalry, aka Jennison’s Jay-Hawkers. The man who led them gained a reputation for his brutal tactics in pursuit of the abolitionist cause, and was apparently not very particular in choosing his victims.

“I can understand why people would not like the idea of KU commemorating Jennison’s Jayhawkers,” said Will Hickox, public programs coordinator at Lawrence’s Watkins Museum of History.

“They were abolitionists, so they freed a lot of slaves in Missouri and Tennessee and in Mississippi, where they also operated, but they were also notoriously ill-disciplined,” Hickox said. “They also looted a lot of people and they murdered people as well, some of whom were not on the Confederate side.”

It was in 1864 that Jennison was arrested by federal authorities for plundering in Missouri, a crime that ended up getting him court-martialed, convicted and dishonorably discharged from the Union Army.

But, because of the strong pro-Union sentiment in Kansas during and after the Civil War, Jennison was easily forgiven — or at least given a pass — for his war crimes, Hickox said, even serving a couple terms in the Kansas Legislature after his army days. 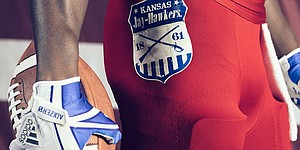 KU and Adidas on Tuesday unveiled the "Jay-Hawkers" alternate uniform, which will be worn in conjunction with the program's annual Salute to Service weekend.

KU’s modern homage to Jennison and his Jay-Hawkers includes a football helmet emblazoned on both sides with the cavalry’s guidon, as well as old-timey patches on the backs of jerseys signifying the start of the Kansas Jay-Hawker regiment in 1861. “Within the logo is a crossed rifle and saber, which were provided to volunteers when they joined the regiment,” KU’s press release said.

The athletes’ crimson pants take inspiration from another company of border scouts led by Jennison — the infamous “Red Legs,” formed in 1862 and known for their red or tan-colored leather leggings. The group, which was never officially mustered into the Union Army, was also notoriously harsh in their duties along the Missouri border.

While Hickox doesn’t take much issue with KU Athletics using Civil War imagery in its uniforms, he also said he found it “unusual” that the “Red Legs,” not an actual military unit, became part of a design meant to honor military personnel.

“These were sort of guys that did their own thing,” Hickox said. “They caused problems for the Union command because of their actions on the field.”

Jim Marchiony, KU’s associate athletic director for public affairs, said KU Athletics and Adidas worked together on the uniforms’ design, which he said came at no extra cost to the school.

He also said KU Athletics was aware of Jennison’s complicated legacy but felt his contributions to the abolitionist cause outweighed any unsavory actions.

“It’s really a testament to the Jayhawkers and their efforts to help make Kansas a free state,” Marchiony said. “ … It was really more about the regiment than about any particular person.”

Hickox expressed similar sentiments, pointing out the many atrocities committed by both sides. “And of course it was a good thing that the Union won the war,” he emphasized.

“I really think it’s important to keep in mind all sides of the dispute without trying to imply that the behaviors of his men against the enemy totally negates the good they did in freeing slaves,” Hickox said of Jennison and his soldiers.

College athletic programs have been using Civil War symbols in their uniforms, mascots, arenas, songs and other tributes since at least the late 1800s. KU’s now-dormant “Border War” with Mizzou is one prime example, Hickox said.

Still, he senses most people aren’t fully aware of the details behind the history that inspires these sports traditions. It wouldn’t hurt to do a little research, he suggests.

“Knowing more about what happened before and during the Civil War would certainly help inform these debates we have,” Hickox said. “I applaud the urge to dig into it, to really get to the bottom of what spurs people to commemorate these things and keep them alive.”

The Jayhawks face off against the Baylor Bears (who will not be donning Civil War-inspired uniforms of their own, by the way) Saturday at 11 a.m. at KU’s Memorial Stadium.

Selling items at the ku stores around the stadium?

Where were these when we used to play the slavers of Mizzu?

Nice of you to find the negative in your reporting. Bad things happened during the Civil War including the sacking of Lawrence and the graves up on hill.