How much is a winning football season worth?

An extra $40,000 a year for University of Kansas athletic director Sheahon Zenger.

That annual performance bonus is among specific perks — rather, potential perks — outlined in Zenger’s latest contract renewal, requested and obtained Tuesday by the Journal-World.

Outgoing KU Chancellor Bernadette Gray-Little and Zenger signed the latest amendment to Zenger’s employment agreement on May 4 and May 2, respectively, according to the document.

The new agreement, effective July 1, stipulates that Zenger’s employment will extend another four years — through June 2021 — and that his new annual salary will be $700,000.

Zenger has been KU’s athletic director since February 2011. His current base pay is $619,000, according to KU Athletics. The new salary represents a 13 percent raise. 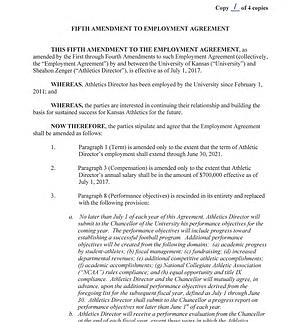 The updated agreement specifically states that Zenger’s performance objectives “will include progress toward establishing a successful football program.”

Under the agreement, Zenger is eligible for up to $50,000 in annual bonuses contingent on certain teams’ success — notably, each goal is relative to that particular team’s current record. According to the agreement, he will receive:

• $40,000 if the football team has a winning record, defined as a record of at least as many wins as losses, not counting bowl games.

“For example, if the team finishes the regular season with six wins and six losses, Athletics Director will qualify for this bonus,” the agreement says.

• $5,000 if the women’s basketball team has a winning record during the regular season.

The bonus language appears to indicate that Gray-Little and the university want to see the lion’s share of Zenger’s efforts focused on turning football around.

Last fall, the KU football team finished its eighth consecutive season with a losing record. And the team’s 2016 season record of 2-10 was widely viewed as a step forward; its 2015 season record was 0-12.

The KU men’s basketball team made the NCAA Elite 8 the past two seasons, while continuing to strive for another national championship, the last of which KU won in 2008. KU was runner-up in 2012, losing to the University of Kentucky in the championship game.

As it did when Zenger was first hired, the updated contract still stipulates that if he is fired without cause, he will be paid one year of salary for every year remaining on his contract, up to a maximum of two full years of salary.

Gray-Little, who has led KU since August 2009, announced in September that she would step down as chancellor this summer.

Her successor was named on Thursday. The Kansas Board of Regents hired Douglas Girod, executive vice chancellor of the KU Medical Center, to take over as KU chancellor beginning July 1.

As for the timing of the contract extension — less than a month before KU’s next chancellor was named — Jim Marchiony, KU Athletics director for public affairs, referred questions to KU public affairs. That office did not respond to the question late Tuesday afternoon.

It's also not clear how much of Zenger's new salary will be paid by the university versus private dollars through KU Athletics. That information was not available late Tuesday. However, in the past more than half has been paid by private funds.

In a previously reported statement, Zenger said he was pleased to have the opportunity to continue representing KU.

"I have really enjoyed sharing in the tremendous accomplishments so many of our teams have achieved over the past several years,” he said. “Likewise, we are committed to doing everything we can to raise the level of success of every one of our teams.”

Gray-Little said, also in the statement, that since Zenger’s arrival in 2011 the Jayhawks have “enjoyed success on and off the field.”

— The Journal-World’s Matt Tait contributed to this story.

I'd be ecstatic with a winning season. I feel like there's a chance this year. Not a great one, but a chance nonetheless.

Especially since it's now defined as a .500 record. But there will be no complaining anywhere in Jayhawk land if this team wins six games this year.

But until those things actually happen, I am not getting my hopes up.

Six wins in football is almost like a dream.

It's a comin' boys. This staff has demonstrated a willingness and drive to accomplish the goal of a competitive FB program. Even to the point of hiring one of the best offensive minds in the game to lead an offense that is being raised from the ground up. Our defense has been better than the offense since Coach Beaty has been here. Once the offense catches up either this year or next, we will be competitive in our league. It will be fun once again to bring teams into Memorial and do our best to knock them off.

The human spirit is amazing in that it can find hope and the joy of anticipation even after falling into a volcano, being swamped by a tsunami or swallowed by an earthquake. Like the rest of you posters, I have seen the Jayhawks starting off each season undefeated...until they play a game or two.

I too root with all my heart for KU football to be relevant again and not just be an excuse to get fresh air and drink till Late Night. However, I've heard this polka music so many times before so pardon me if I restrain myself and take the "over" on when The Z Man collects that bonus.

As a student, I had the thrill of seeing Bobby Douglas, John Riggins and John Zook play dominating Division One Football and share a conference title. I can only hope that this year's incoming freshman class can share that same amazing feeling.........before they graduate.

My apologies to all but even though I had the good sense to become a Jayhawk, I am indeed from Missouri and you've got to ....hell, you all know the rest!

The thing that bothers me the most about this is the bonus Zenger gets for KU reaching the Elite Eight of the NCAA men's basketball Tournament. No bonus for a Final Four?

That right there tells me all I need to know about the mindset and culture of the KU Athletics Department and the lowered expectations for the men's basketball program under Bill Self - apparently, the Final Four is no longer the standard at KU; the Elite Eight is. And it confirms what I've long suspected, that apparently postseason mediocrity is okay as long as we win that umpteenth conference title in a row. Meanwhile, the Dukes, North Carolinas, Kentuckys and Connecticuts of the world continue to leave us eating their dust by not only advancing to Final Fours but winning national titles.

That is a very bad incentive package. He's not directly in charge of football...would he fire a coach then hire one at $10M per year just so he could get a chance at $40K? Granted, that's a little hyperbole, but I don't like it.

Can anyone else see how stupid this is? And if an AD needs a bonus to help motivate him toward success, then you've hired the wrong guy. BGL being gone is step #1 toward football improvement. Maybe Zenger is a nice guy. Maybe he's a good guy. But I'm sorry, he doesn't deserve a raise. He doesn't deserve a bonus for a .500 football season (does anybody recall all the complaints when Mangino "only" went 5-7 in his final season? Now KU athletics is giving incentive for 6-6 ? To a guy that was very responsible for lowering the standard for football so low that he now will get rewarded for being average?). He's lucky to still have his job. Under Zenger, KU football is something like 9-51.

People are getting excited because Beaty won 1 game to a self-destructing UT program in OT (come on, Rhode Island shouldn't be counted, they lost to James Madison 7 to 84)... and Beaty lost to Iowa State in Lawrence? Things are looking better with Beaty, but as some guy says, "Not so fast my friend".

Unlikely because of his own doing in hiring Weiss. Jaybate sure called that one.