Burks, who played his freshman year at Coffeyville Community College, had just three days earlier tweeted out news of receiving an offer from KU. The 6-foot-3, 290-pound defensive tackle reached a decision fairly quickly after visiting Lawrence, in part because of his familiarity with the program. While confirming his decision to Jayhawk Slant, Burks said he grew up attending Kansas football and basketball games. What’s more, Burks’ former O-North coach, Gene Wier, now serves as Beaty’s director of high school relations. 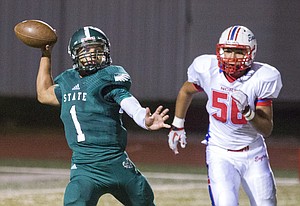 Burks, who reportedly also picked up offers from SMU and UAB, told Jayhawk Slant’s Jon Kirby although he played defensive end in high school, he has since added enough weight to his frame to become an interior lineman. He played in 11 games for Coffeyville in 2016, making 4.3 tackles a game, and recovered a fumble.

According to Burks, KU’s coaches see potential in him at the next level.

“They said they liked that I was a playmaker, but really they liked my motor,” Burks told Jayhawk Slant.

The Olathe native will play one more season of junior college football at C.C.C. before joining KU ahead of the 2018 season.

Burks, currently un-rated as a juco prospect according to Rivals, joins Grandview, Mo., prep Cartez Crook-Jones as the second defensive lineman to commit to KU in the Class of 2018.

We need defense tackles in this recruiting class to replace all the DT's that we will be losing.

Didn't we bash Weis for going the JUCO route? I know the 2018 class is off to a great start and it's 90% high school players but the 2017 class was full of them. Not opposed to sprinkling a few in each class, especially because Kansas has such great JUCO programs, but don't want to anywhere close to a 50/50 ratio of high school commits and JUCO transfers. IMO

The bigger difference than the ratio of HS to JC players is the # of players that arrive early vs the number of players that never set foot on the field. That was the real downfall with CW's recruits: most never even played for us. Those recruited by Beaty are almost all on campus for the start of spring semester. That's a HUGE difference.

It sounds like Burks is staying at CCC just so that he can keep playing and working on developing his game. With 3 Sr's & 3 Jr DT's this year, there won't be a lot of minutes available, so better to be where you can work on your game.

It also sounds like he will be here in January to start working with our crew. He will be needed.

Are you really comparing the "recruiting" Weis did to what Beaty has pulled off after winning 2 games in 2 seasons?

Weis went the JC route with the majority of his recruits, way over a 50/50 split. Plus his were kids that he had had connections with while at nd. The QB who went to byu then a JC comes to mind. Beatty isn't anywhere near that ratio. Keep in mind what Snyder did at ksu when he first started there. Worked for him if the ratios are kept at a good number.

Zach Burks is a Football Player (John Madden Terminology) , at least from a Name standpoint!