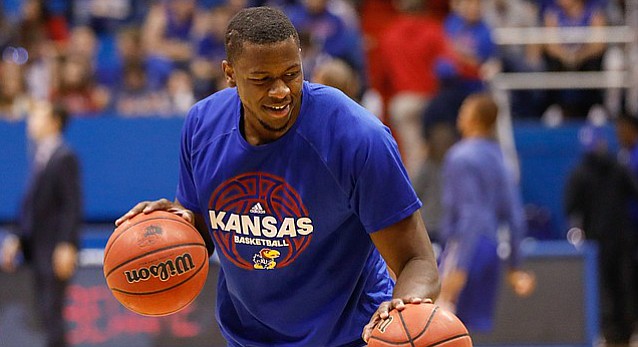 Kansas forward Dwight Coleby’s walk down Campanile Hill on Sunday during KU’s graduation festivities made his status as a college graduate official.

And that makes his immediate future a little more interesting.

Kansas coach Bill Self told the Journal-World on Sunday that Coleby was at least considering leaving KU and that a final decision should come in the next few days.

“Dwight graduated,” Self said. “So, naturally, he has the opportunity to come back or he could elect to be a graduate transfer and be eligible immediately somewhere else. Dwight and I have had numerous talks. We love him and, of course, would welcome him back.” 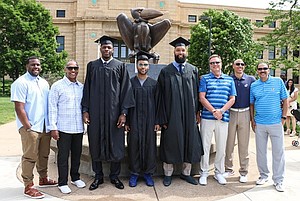 With the addition of William & Mary grad transfer Jack Whitman, the Jayhawks, with Coleby, would have five players competing for minutes in the front court during the 2017-18 season — Whitman, Coleby, Mitch Lightfoot, Udoka Azubuike and Billy Preston.

Given that Coleby averaged just 5.6 minutes per game last season, it certainly seems possible that his minutes would be limited again next season, which, according to Self, is what inspired the former Ole Miss transfer to consider his options in the first place.

“He’s trying to decide right now if the role that he would have here would be one which would give him the best opportunity of playing professionally overseas, more than likely,” Self said. “He hasn’t let me know what he wants to do yet but we’ve had open dialogue. He’s been great and I’m sure a decision will come soon on what direction he wants to go.”

Coleby and Frank Mason III, along with former Jayhawk Drew Gooden and a handful of KU basketball managers, all enjoyed graduation festivities throughout Sunday, which Self said made for a busy and fun-filled day. Part of the reason for the craziness of Sunday was the fact that it also was Mother’s Day and Self’s parents came to town to celebrate.

“I had 14 family members in myself,” Self said. “And I took ’em all to Garth (Brooks at Sprint Center in Kansas City, Mo.) (Saturday) night.”

Self, who has a long standing friendship with Brooks said the concert was amazing and that the country music legend played until midnight.

Self said he spent a little time with junior guard Svi Mykhailiuk on Sunday and got a good update on the status of the injured ankle that kept him out of the final few days of last week’s NBA combine in Chicago.

“I just saw him,” Self told the Journal-World on Sunday afternoon. “His ankle seems to be doing a lot better, he’s walking without a limp, he’s hopeful that he can get some rehab in and maybe still do two or three workouts in before the deadline.”

Former KU forward Drew Gooden, who led the Jayhawks to the 2002 Final Four before leaving for the NBA after his junior season, returned to Lawrence over the weekend to walk down the Hill after finally completing his final college class.

Gooden, who enjoyed a 14-year NBA career that netted more than $60 million dollars said the plan was always to return to KU to participate in graduation ceremonies after completing the requirements for his degree.

"It was unfinished business," said Gooden, the former Consensus All-America First Team selection and the 2002 NABC National Player of the Year. "Graduating, there was a big gap. I joke about it. I was a 15-year senior. It was one hell of a senior year. I got to enjoy it a bit, playing at the next level at the NBA and having that experience. Being about to come back and get that diploma and having that fulfillment, it was something that was missing for quite some time, but now it's completed."

Well there's the scholarship needed if Svi does in fact decide to stay in school. Should be interesting to see how things play out.

Coleby played well towards the end of the season. I'd like to see him stay along with Svi and we work on something else with the scholarship situation.

Another player pushed out by the newbies coming in.

"Kentucky-West", I have heard non-KU people call us in a jeering manner. They also say that Self and Calipari asst-coached at the same place (although not at the same exact time, but almost), which was of course KU, so none of this surprises them (no matter how much of a logic leap it may be)...

No, we are Gonzaga East now.

With all the transfers we might be Iowa State South by Southwest.

This is big-boy athletics. Bring it or someone else will.

"Another player pushed out by the newbies coming in."

It's a bit of a challenge to see Whitman as a newbie, and a bit ironic considering Dwight was one of those newbies just 2 years ago. It makes a lot more sense that Coach would take Whitman because he would have known the academic status of his players, and have had the conversation with Dwight already.

If he leaves, I can easily see him having an AWIII type season for someone else. It stinks that the injury last year was so slow to heal. He seemed to be doing so much better as the year went on.

If he stays, there's 15 minutes behind Dok waiting for his name. Whitman and Preston don't want it, and Mitch has no chance banging in the paint with the big boyz. I sure hope he stays.

I hope Dwight finds success wherever he decides to play his final season, but I'll be rather surprised if he ends up having an AWIII type of season.

Matt Tait discussed all these possibilities on a recent PodCast at LJW.

I don't think he realized or mentioned that Dwight in particular was graduating and thereby eligible to transfer, though the concept was there. Matt was definitely a lot closer than the others who are all certain that meant __.

Congrats to Drew for seeing the classes through to the diploma.

Drew Gooden as stated in the article.

Svi isn't coming back. That's my guess. Guy has the taste of camp and has stood out with shooting, etc. He's been wanting to go and will enter. If it doesn't work, he'll go back overseas. But I don't see him coming back.

Matt wrote a column not too long ago about the different scenarios that could play out and how the scholarship allotment might fit. He suggested that he didn't know whether or not Coleby was graduating in May or maybe could graduate in August, but that he wouldn't be surprised to see Coleby go the Grad transfer route. We all like Coleby and no one wants to see him go, but it is no surprise that it's being talked about.

Tilmon to Mizzou. The plot thickens.

I still think we could really use Coleby, and hope that he stays.