Kansas City, Mo. — The top seed in the Midwest is one victory away from the biggest stage in college basketball. Kansas put on a Sweet 16 show Thursday night at Sprint Center, flying by Purdue for a 98-66 victory.

The man who helped KU thrive all season, earning KU the right to play in the program’s home away from home in K.C., senior Frank Mason III turned in a nearly flawless performance, flirting with a triple-double. The senior point guard’s 26 points, seven rebounds and seven assists made it easy for the Jayhawks (31-4) to dominate the second half and pound the Big Ten’s champion, Purdue (27-8).

With Mason making the game simpler for everyone in a white uniform, four other Kansas players joined him in double figures, led by his longtime backcourt mate, Devonte’ Graham, who drilled five 3-pointers en route to 26 points.

Freshman star Josh Jackson delivered a double-double (15 points, 12 rebounds). Svi Mykhailiuk finished with 10 points. Sixth man Lagerald Vick, a spark for Kansas in both halves, put up 12 off the bench. 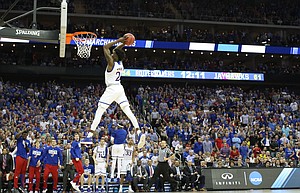 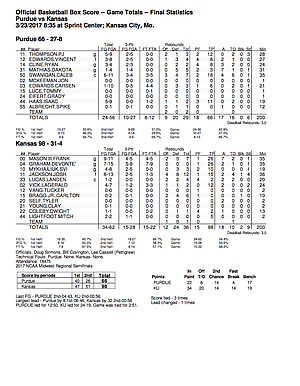 • The game turned when: Vick set Sprint Center ablaze with a 360-degree, two-handed slam in the open floor in the second half.

The Jayhawks already led by seven when Vick felt confident enough to give his insane, spinning jam a shot — knowing a miss would land him directly in coach Bill Self’s dog house.

When Vick finished off the spectacular slam that will live on in tournament clips for years, his teammates and the crowd ate it up. It came smack in the middle of an 11-0 Kansas run, the Jayhawks soon expanded the lead to the 20-point range and Purdue never recovered.

• Offensive highlight: Technically, Vick’s aforementioned jam stole the show, but because it came at such a critical juncture, the sophomore’s second-best play of the night becomes the de facto highlight champ.

Just before halftime, Vick went behind the back after a steal (aided by an official on the sideline, who had the ball bounce off of him and back to the Jayhawks’ sophomore guard) to ignite a three-on-one fast break.

Vick threw a quick pass to Graham near the top of the key, then got it right back above the rim for a fantastic alley-oop that gave KU a 47-40 advantage.

• Defensive highlight: The Jayhawks stepped onto the floor in front of a pro-KU crowd determined to keep Purdue star big man Caleb Swanigan from having his way in the paint.

The all-American candidate known as Biggie shot just 3-for-7 inside the arc and only grabbed seven boards on the night after posting 28 double-doubles this season.

• Key stat: Points in the paint. After much was made of Purdue’s size, with Swanigan and Isaac Haas, KU out-performed the Boilermakers inside.

The Jayhawks, known for their four-guard lineup, won points in the paint, 34-22, versus Purdue, known for its front line.

• Up next: The Jayhawks will be back at Sprint Center Saturday at 7:49 p.m. to face Oregon with a spot in the Final Four on the line. 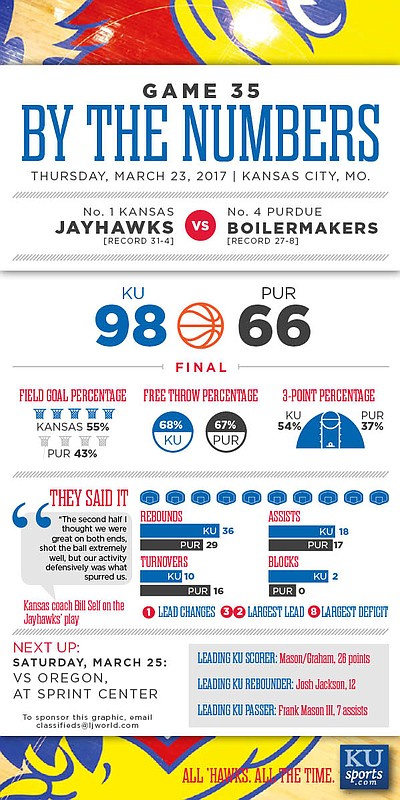 Halfway there. Easily the best back to back to back performances that I can remember Kansas ever playing in the tournament.

The national POY, the most talented player in college, the best coach and one hell of a team.

Now let's get ready for Ore-gone

I think my favorite part of the game was when Kansas was up 74-60, and one of the CBS announcers started to say, "There's still plenty of time left in this game; Purdue has a chance to come back if they can get stops..." Then Josh Jackson drove to the basket, scored and was fouled, and the announcer doubled back and said, "Forget what I said, Purdue has no chance." I laughed my ass off at that comment!

I am with you on that. It was like..never mind. Ha Ha

The good guys sized them up, then promptly knocked 'em down! NEXT!!!

Frank Mason, in a game featuring the leading two candidates for National POY, just showed in a heads-up comparison that there IS NO COMPARISON to be made. Mason is the nation's best player in 2017.

Any lingering doubt has been removed.

And Nova went with Hart on its last 2 possessions and he turned it over. Loss!

If Mason doesn't win the Wooden, the Naismith and the AP player of the year then they might as well stop handing out the trophy.

It will be an absolute joke if Frank doesn't win. - - But yet I see where Lonzo Ball is surpose to have the inside track.psssssssssssssssssst please

KU absolutely took the steam out of the Boilermakers! Rock Chalk Jayhawks! All those squeakers during conference play and now 3 fantastic games. Three more games like this and it's going to be a spectacular season.

Yeah, Bryce, that was Reggie Miller that said, "No, Purdue doesn't have a chance to come back." I was laughing my A__ off, too. I have said it a thousand times until I am Jayhawk Blue in the face--Frank is Player of the Year. ESPN is getting tired of that Ball kid--Frank is POY. Frank's motor is like a car at the Indianapolis 500--unbelievable!

Billy Packer said the same thing when Kansas played UNC in 2008. Only he said it in the first half!

Reggie Miller's comment tonight isn't as epic as Billy Packer's nine years ago, but it's still in the same ZIP code for sure!

Two B1G teams have trash talked and tried to bully the Jayhawks. This team backs down to no one.

I know we're not going to face Michigan in the Elite Eight, but we should still ask Jim Delaney to send us a Big 10 championship trophy of our own!

I think I yelled - in an emphatically good way - "Coleby" at least 6 times during the game. I'll have to ask my wife in the morning - or later in the day, whenever she'll start talking to me again after waking her up several times - for the official stats. That dude has become our secret weapon. Boards, disruptions, just getting after it. Every year I seem to ask myself, "is this my favorite version of the Jayhawks ever?"

I thought it was all of the guys, even the much maligned Bragg & Svi. It's not that they were perfect by any stretch (Svi got really barked at by Frank for not giving up the ball on the break and trying to lead instead.) but all of them were pivotal in the swarming D from about mid-1st half, that disrupted the throw the ball into the paint Offense.

I've noticed Coleby over the last half of the Big 12 season. Last Saturday in Tulsa I told my Dad "Coleby is going to play at least 10 minutes today. He has ability, but they keep hoping Bragg takes off ........" I think he played 9+ minutes and did well.

How do that many coaches not see his potential for short 5 minute bursts ? He defends, rebounds and can score !

I'll celebrate when/if we get the national title trophy. Until then, stay focused and continue to eat.

When the Jayhawks come into games being confident in who they are and giving respect to their opponents, that's the recipe for success on the floor. We can't breathe after games until the break after the second game of the weekend, during which time we can rest, relax, and then mentally gear up for the next two games.

Totally agree about not losing focus!

In a ridiculously superstitious stupor I have taped the first three games, not watching one second of live action, waiting to see the the tape after the game is over and now the Hawks have soared to the Elite Eight.

Should I watch the Oregon game live or should I maintain the streak by continuing the "tape and wait" process?

Don't mess with streaks. I have a few superstitions going on as well.

Don't change your routine. Don't mess with success! Maintain! If you change it up and our Jayhawks (L word) I wouldn't want to be you.... ;) lol

It's only weird if it doesn't work.

It's really all in the timing though. When fate has us winning, and not watching suits fate's temperament, then you don't watch. But if fate has us losing, like maybe in the Final Four, then you have to watch to undo fate's effect.

I'm not superstitious though. LOL

Great game tonight. Ball movement took the breath out of the big men of Purdue. Dribbling and passing side to side and back out was awesome. By the end of the first half they couldn't keep up. Biggest thing I am seeing is Coleby and Svi are really starting to do the small things to help the team. Bragg is even coming around a bit a showing great effort diving for balls. Let's hope KU continues to play like the team played tonight. This team may be the most unselfish KU I have ever seen.

"This team may be the most unselfish KU I have ever seen."

Who would have thought before the tip-off that Mason would have the same number of rebounds as Swanigan! Frank was absolutely spectacular. And ALL the guys were great. Josh was a disruptive force--seemed to be everywhere. This team is a joy to watch and has been all season. Three more to go and that won't be enough--this is too much fun!!!!

Thanks, Dirk and Brian for mentioning Bragg. I didn't realize it until I saw the box score, but he had six rebounds in 10 minutes. Also, when I look at the replay of the game sometime, I'll bet that I see several other things, such as his diving after the loose balls.

If Carlton and Dwight can continue to give some good minutes off the bench, it can make a huge difference.