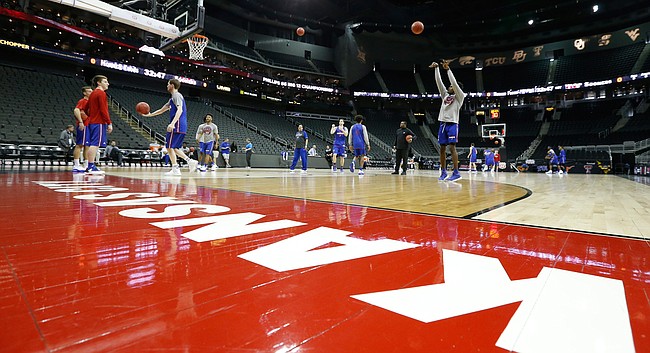 The Kansas Jayhawks shoot around during a practice on Wednesday, March 8, 2017 at Sprint Center.

The first reward of the Kansas men’s basketball team’s ability to land the No. 1 seed in the Midwest region in nearby Kansas City, Mo., in this year’s NCAA Tournament figures to show up loud and clear Wednesday afternoon.

That’s when the Jayhawks (30-4) will host a 50-minute practice at Kansas City's Sprint Center from 3:10 to 4 p.m. that is both free and open to the public. In the past, whether in the NCAA Tournament or the Big 12 tournament, these sessions have attracted several hundred KU supporters.

The top-seeded Jayhawks, who will face No. 4 Purdue (27-7) at approximately 8:39 p.m. Thursday, arrived at their tourney headquarters in downtown KC on Tuesday afternoon and will spend the next couple of days preparing for their Sweet 16 showdown with the Boilermakers. In many ways, though, KU coach Bill Self said everything the team went through during the season up to this point was the first step in preparing for what’s next.

“I hope so,” Self said Tuesday. “I don’t know that there’s an exact formula. A lot of people think if you play too many close games it wears your guys down, and a lot of people think you can’t win in March unless you’ve been battle-tested. Certainly we’ve been battle-tested. That doesn’t guarantee us playing well or playing smart, but there’s not going to be a ton of things that can be thrown at us that we haven’t seen before. That doesn’t mean a coach can’t throw something at us that we haven’t seen before. I’m just talking about situations. So I've got to see that as a positive.

“It’s a tough match-up," he continued. "...We’ve gotta do some good things in order to be able to match up.”

Bill Self: Jayhawks in good frame of mind for tourney's second weekend by KUsports.com