Tom Izzo on Jayhawks in tournament: ‘They have a good chance to have some success’

Tulsa, Okla. — After Kansas advanced to the Sweet 16 with a 90-70 second-round victory at BOK Center, Michigan State coach Tom Izzo said the Spartans lost to the better team.

Izzo’s only complaint was the score didn’t show how close the game really was.

But each and every time the Spartans thought they could make a run or take advantage of KU’s lack of depth, the Jayhawks used their experience to their advantage.

After the Spartans cut the score to five points — two technical foul free throws from Cassius Winston and a 3-pointer by Matt McQuaid — the Jayhawks closed on a 21-6 run in the final seven minutes.

“I think they’re good defensively, but it’s a different Kansas team,” Izzo said. “The high to low, the lock-down defense maybe isn't quite the same as it's been over the years. But they can score with anybody and they can run.” 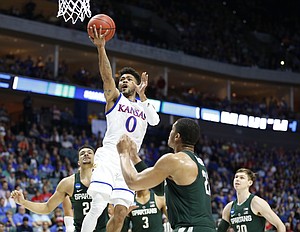 When Kansas senior center Landen Lucas picked up his fourth foul with 6:43 left, it only made the Jayhawks run faster. Plus, KU reserve forward Dwight Coleby didn’t miss a beat defensively.

“They just took over,” Izzo said. “I don't know if it was the veterans, a combination of veterans and (Michigan State’s) youth.”

When the Spartans (20-15) entered their match-up against the No. 1 seeded Jayhawks, they wanted to limit KU’s points in transition and try to close driving lanes.

But once the Jayhawks saw a chance to pull away in crunch time, the Spartans couldn’t do anything to stop them.

“I thought we did an incredible job on (Frank) Mason as far as letting him do what he does, and that's that fast break that's so lethal for him,” Izzo said after Mason scored 20 points on 6-of-16 shooting. “But the gaps started getting bigger as we got a little tired, and we started missing some shots."

When Kansas returns to Sprint Center in Kansas City, Mo., for a Sweet 16 match-up against No. 4 seed Purdue (who beat Michigan State twice), perhaps the Jayhawks' biggest weakness is their front-court depth when they run into foul trouble.

Izzo thought that would play a factor Sunday and was impressed when the Jayhawks didn’t have any missteps in the final minutes.

“A little bit of youth, a lot of experience, good coach, 16,000 fans or however many were here. That’s a recipe for some success, and I think they have a good chance to have some success.”

The Spartans played Kentucky, Baylor and Duke in non-conference play, all teams ranked No. 1 throughout the season, and they hoped that would prepare them for tournament games similar to Sunday.

“The only shame of the whole event for me is it wasn't a 20-point game,” Izzo said, “and yet, the better team won tonight.” 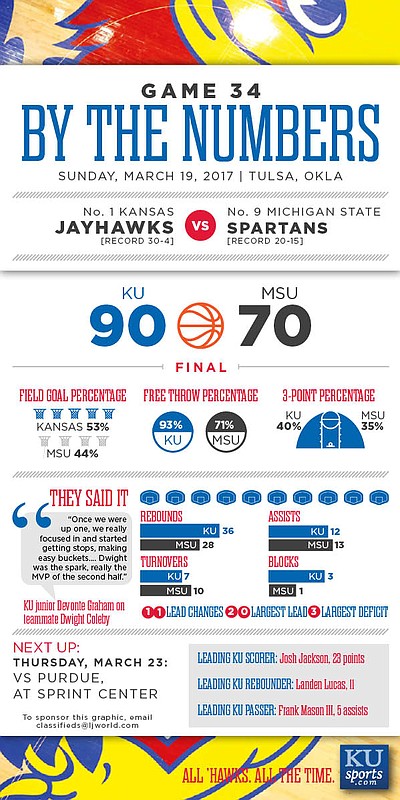 I wonder how it was that an MSU team that lost 14 games was invited to the Tournament in the first place, much less seeded 9th. If I was on a Selection Committee, and I saw you had 14 losses, I'd relegate your mediocre ass to the NIT and not give it another thought.

What was Miami's record? The Miami that lost by 20 to the 14 loss Spartans. Nonsense.

Exactly. You cant just count up wins and losses. WSU only had 4 losses, should they have gotten a 1 seed??? It's who you play, who you beat, and margins.

14 losses is too many losses to be in the Big Dance as an at-large. The maximum number of losses an at-large team should be allowed to have is 11.

"The Spartans played Kentucky, Baylor and Duke in non-conference play, all teams ranked No. 1 throughout the season..." (and all teams that Kansas has beat this season!)

After Bridges got healthy, MSU had a stronger finish this year than many of the other power conference candidates and superior to mid majors that might've had better records. They're a force next year.

This was not one of Izzo's better teams; the Spartans will be back, starting with next season.

I can appreciate what izzo was saying about it being closer than a 20 point game. But without referee intervention, we would have had a comfortable 10-12 point win regardless. Im glad we didnt let ticky tack inside fouls and a ridiculous tech on vick deter us. We controlled most of the game and were up 6-8 points for a majority of it. Lets keep it moving!!

Offensive foul and the T were absurd calls! Kept it close when it was clear KU was pretty much doing whatever they wanted as game wore on. In the end it was a 20 point game no matter how one wants to look at it being close early.

I think the tournament refs need to have a meeting and talk about how they're incompetence can't dictate a games outcome. They tried with our game by missing two obvious and horrible charge calls and then giving Vick a technical, for reasons I still don't quite understand. Also, they blew calls in the Gonzaga and UNC second round games which dictated the outcomes.

If one of the "missed charges" you refer to was the one that was originally a charge but changed to a block on Jackson, they got that one right the second time. Jackson had his foot partially in the restricted area under the basket.