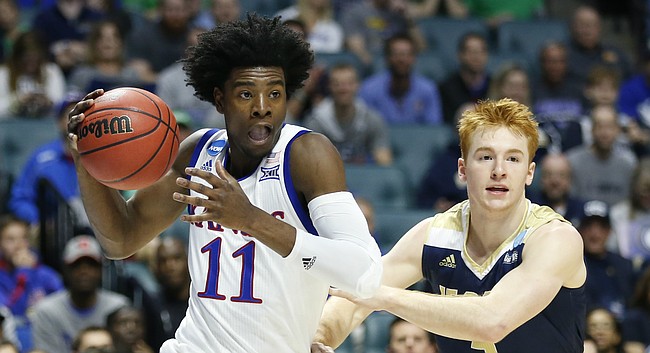 Tulsa, Okla. — Sure, Kansas played a tad rusty after an eight-day layoff leading up to its NCAA Tournament opener Friday. But the Jayhawks again looked the part of the No. 1 seed in the Midwest before halftime, with star freshman Josh Jackson back in the lineup.

With KU’s dynamic four-guard backcourt of Jackson, Frank Mason III, Devonte’ Graham and Svi Mykhailiuk back intact, the Jayhawks drubbed overmatched UC Davis, 100-62, to move on to the tourney’s second round.

Jackson scored 11 of his 17 points in the first half, and looked eager to atone for a one-game suspension that contributed to a KU loss to TCU in Kansas City, Mo. The freshman, too, made a point to impact the game all over the floor, per usual, adding seven rebounds and two assists to his stat line.

Graham put up 16 points and four steals, Mykhailiuk contributed 16 points and Kansas (29-4) made it 11 straight seasons with a victory in the NCAA Tournament’s Round of 64. 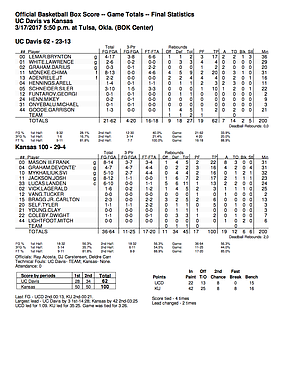 • The game turned when: The Jayhawks stopped settling for 3-pointers against the Aggies (23-13).

UC Davis had tied the game at 21 ahead of a media timeout at the 7:57 mark of the first half. The game was close primarily because KU had missed three straight 3-pointers and three straight 2-point jumpers during a drought.

The Jayhawks took a completely different offensive approach after hearing from head coach Bill Self during the commercial break and the game quickly got out of hand for the Aggies.

KU closed the half connecting on 10 of its final 12 attempts, building an insurmountable 50-28 halftime advantage.

Absorbing the message received from Self and his assistants during the timeout, Kansas converted six layups and a Lagerald Vick alley-oop before intermission. Only two of the Jayhawks’ last 12 attempts of the first half came from behind the 3-point line, with the team in full-on attack mode.

Easy baskets inside from Jackson, Mason, Landen Lucas and Mykhailiuk ruled the day and the Jayhawks could play loose and free down the stretch with no worries about whether they would advance to play again on Sunday.

• Offensive highlight: Any number of high-flying displays would qualify on this night.

Early on, Mason threw a no-look lob for a cutting Jackson for a 21-15 lead.

Later in the first half, Vick flew even higher than Jackson had to flush another perfect Mason assist.

Then, in the second half, a Vick missed 3 set the stage for Jackson to again return to the spotlight, as he effortlessly soared above the rim for a put-back jam that increased the KU lead to 70-41.

• Defensive highlight: Typically this category goes to an amazing steal or swat, but how about KU’s team defense in general for this tourney debut?

The Jayhawks limited the Aggies to 34-percent shooting, fueling the rout.

• Key stat: Free throws. The Jayhawks didn’t have a tightly contested tournament atmosphere to deal with, but they only missed three at the charity stripe, finishing 17-for-20 — a good way to open March Madness, where freebies can be critical.

• Up next: The Jayhawks will return to BOK Center Sunday to face the winner between Michigan State and Miami, Fla.

Nicely done, Kansas! You haven't looked that dominant since non-conference play! And to think, I thought Jim Les had a chance to do it again...

Great game for the Hawks. Michigan State looked good tonight but I think we can get by them! Let's go Hawks!

KU-MSU is a toss-up in my mind. We have a more talented team, but KU under Self is 2-4 against MSU under Izzo.

If MSU played like they did tonight it will be a tough game. This team is battle tested enough that I think they can do it. It won't be easy.

MSU was well represented tonight, but the arena was filled with Jayhawks! Hopefully a good turnout for Sunday and this is almost like a home game. Everyone had a good game tonight.

MSU will have to deal with a much better defensive team in KU than Miami was. I believe that will be the difference, along with KU's experience, as MSU is playing mostly freshmen.