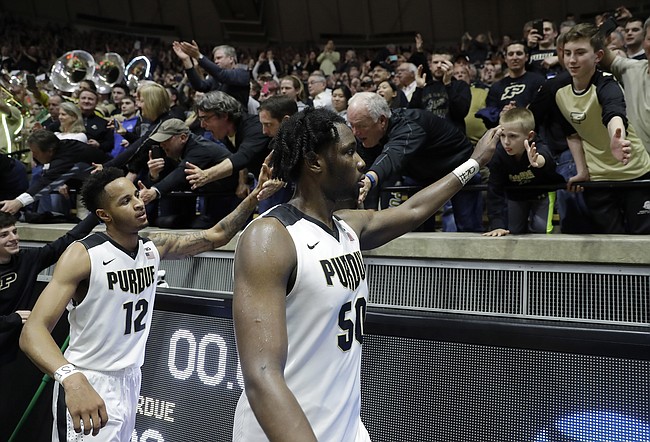 So many interesting angles popped off the page of the Midwest regional when the brackets came out on Selection Sunday.

Foremost is the potential Sweet 16 matchup between a pair of schools that consider the Sprint Center, site of the regional, their home away from home, Kansas and Iowa State, which has won three of the past four Big 12 tournaments in the building.

Ticket brokers are sitting on a gold mine, praying that both Big 12 schools advance to that Sweet 16 matchup. The Power & Light District buzzes when Iowa State and Kansas head on a collision course in the Big 12 tourney, an excitement that would triple with a ticket to the Elite Eight at stake.

Here’s the best part: If the tickets are out of your price range, that means you get to listen to Kevin Harlan’s call. It doesn’t get any better than that. He brings viewers the excitement he feels court-side.

Not even the South region — with Roy Williams (seven Final Fours), John Calipari (six), Bruce Weber and Gregg Marshall (one apiece) — has as much Final Four experience.

Bob Huggins (one with Cincinnati, one with West Virginia) is the lone Final Four coach in the West, and Duke’s Mike Krzyzewski (12) and Villanova’s Jay Wright (two) are the veterans in the East.

Yet, for all the coaches with Final Four experience, the school that just might amount to the toughest Midwest matchup for Kansas is coached by Matt Painter, who hasn’t yet advanced beyond the Sweet 16. Barring upsets, Iowa State and Purdue will meet in the second round.

Purdue’s size and inside strength make the Boilermakers a tough out for KU. Plus, Purdue ranks third among NCAA tourney teams with a .406 3-point shooting percentage.

Before worrying about playing the Boilermakers in front of a pro-Kansas crowd or the Cyclones in front of a crowd with a big pocket of cardinal-and-gold loyalists, Kansas must get out of Tulsa, where Miami or Michigan State will be sky-high for the opportunity to play with the house’s money against the No. 1 seed.

Exciting possibilities await. For many, the berth itself was cause for celebration. For Kansas, tourney participant for a record 28 consecutive years, Selection Sunday means the excitement is days away.

Purdue, to me, is the scariest team in the top half of KU's bracket.

When was the last time Kansas lost to the same team twice in one season? Never? Kansas handled Iowa State in Ames and it took a record-setting day in overtime (and a career performance from Deonte "I'm fat like Georges Niang" Burton") for ISU to pull off the upset in Lawrence.

Iowa State won't beat Kansas again this year. Period. I'd be happy to see them in KC.

I'm really worried about the 2nd round matchup. You can never count Michigan State out in the NCAA Tourney, regardless of what kind of regular season they had. And KU has always seemed to struggle when they face the Spartans. As for Miami (FL), they have several big wins this season and are battle tested having come out of the ACC. I think KU will win that game, but I wouldn't be at all surprised if it comes down to the last couple minutes. Just like most of KU's games.

The Jayhawks have to be really focused. They cannot afford to come out flat or to fall behind by a large margin in the second half of any of these games if they want to make a deep run in this tournament.

One game at a time and stay focused. Also, I'm always surprised to see a talented team that has a crappy defense. You don't need to be crazy athletic to play good defense, but it helps, and with the talent on our team and the advantages that poses, I don't get how we are weak in that area. I remember Self saying in order to play good defense you have to take offense to a guy scoring on you. And I don't think our guys are taking that approach. They think they can make up for it with points, but that's the heard way. Play strong tight defense, force turnovers, and score off those turnovers. If that's done, the rest will come.

I know that KU has struggled with MSU in the tourney before, but I'd still rather play them than Miami. Miami has looked great at times this year, and if they come out playing well, KU could fall behind by a lot quickly. With MSU, even if KU doesn't play particularly well early, I think the game will still stay fairly close.

As for the later rounds, I agree with Joe that I'd much rather face ISU again than have to deal with the size and power that Purdue would bring to the table.

But the team that scares me the most in the region is Louisville, and I'd be thrilled to see someone knock them off early.

As for ticket brokers, don't forget if Creighton can make it to KC also.