Kansas City, Mo. — Forced to play without freshman All-American Josh Jackson for the first time in 32 tries this season, the Kansas men’s basketball team looked even thinner than normal, was out of sorts at times and struggled mightily at others in an 85-82 loss to eighth-seeded TCU in the Big 12 championship quarterfinals at Sprint Center.

“It was real tough,” said junior Devonte’ Graham of playing without Jackson, who served a one-game suspension for mismanaging a traffic situation back in February, an offense that came on the heels of Jackson being charged with misdemeanor property damage in a separate case. “He can do so many things for us, and not having him was one of the reasons why we lost.”

Added senior Frank Mason III: “It was tough. It showed out there. We missed his offensive presence and defensive presence.... He does a lot of good things for us and we missed him tonight.” 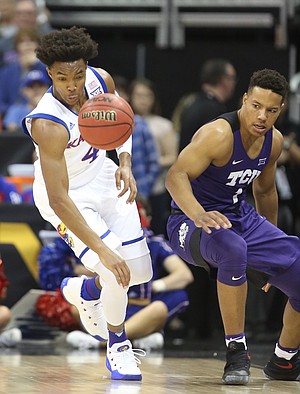 Simple math dictates that Jackson’s 16-point average and long and athletic, 6-foot-8 presence on the floor would have made a big difference for top-ranked Kansas (28-4) on Thursday. According to Self, no one felt worse about that than Jackson.

“He feels bad,” said Self of Jackson, who was not available for comment after the loss. “He feels bad.... But (the suspension) was a culmination of things. We had an incident, one other incident before, so he feels bad and he could’ve handled it better. It’s a teaching moment, not only for me but also for our guys, to learn and hopefully get better from it. So I’m disappointed that he didn’t get a chance to play. He’s disappointed. But I think he will respond favorably to it.”

He hit his first five shots, scored 13 first-half points and finished with 18 for the game. To say Kansas junior Sviatoslav Mykhailiuk snapped out of his recent slump would be putting it mildly and the Jayhawks said the junior’s resurgence came at just the right time, even if it did end with a turnover and costly foul in the final minutes.

“Well, I hope it’s big,” Self said. “He needs to leave out of here with a positive, not (thinking about) the last two plays. He was good offensively, early.”

Added Graham: “That’s good, just letting him see the ball go through the hoop. Hopefully he’ll take it with him in the tournament.”

Asked if his offensive explosion came because he felt like he needed to step up with Jackson out of the lineup, Svi shrugged and said, “I think I would’ve done the same if Josh would’ve been here. I just took open shots that I haven’t been making the last five or six games and today I just made ’em.”

Although his left foot figures to be sore for a couple of days, Graham dodged a bullet midway through the first half, when an injury that sent him hopping into the KU locker room for an examination turned out to be minor.

Graham left the floor at the 10:55 mark of the first half, returned to the bench with just over seven minutes to play in the half and checked back into the game at the 6:01 mark.

Although Graham favored the foot during parts of the second half, the injury scare did not appear to limit him athletically. In fact, he nearly saved Kansas with a deep 3-pointer at the buzzer, but the shot was just off target.

“I could feel as soon as it left my hand that it wasn’t going in,” Graham said. 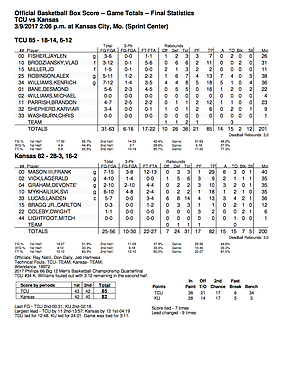 A little more than three minutes into the second half, with his team struggling to regain control of the game, Self was slapped with a technical foul for questioning a blocked shot by Mykhailiuk.

According to Self, who said after the loss that he was fine with receiving the 'T' even though he “wasn’t cussing him or anything,” the confusion came from a recent rule change.

After TCU’s Brandon Parrish put the ball off the glass in transition, Mykhailiuk swatted it away. Self explained the confusion outside the locker room after the game.

“In the NBA, if the ball’s off the backboard it’s an automatic goaltend,” he said. “In college and high school, it’s always been, if the ball’s going up, it’s not goaltending. I was told after I got a 'T' that that rule’s been changed.”

Although Thursday’s loss sent the Jayhawks home in a sour mood, many bracketologists still believe Kansas will be a No. 1 seed when the NCAA Tournament field is unveiled Sunday evening.

Asked if he had a feel for KU’s positioning, Self said, “I have no idea. I would’ve thought if we had won today we’d be in pretty good shape. But I have no idea. Who knows what’ll happen?”

Added Graham: “I don’t know about any of that.... We just gotta regroup because we know our next loss is the end of our season.”

While the Jayhawks may remain a No. 1 seed, one question that came into play after the loss was whether they would be a one-seed in the Midwest Region, which will play the Sweet 16 and Elite Eight rounds at Sprint Center.

Thursday’s loss snapped an eight-game Kansas winning streak.... KU now leads the all-time series with TCU, 14-2.... KU fell to 3-1 at Sprint Center this season and 14-2 in games played away from Allen Fieldhouse. The Jayhawks are now 34-7 all-time at the Kansas City arena.... KU is now 71-27 all-time in conference tournament action, including a 41-11 mark in Big 12 Championship play. 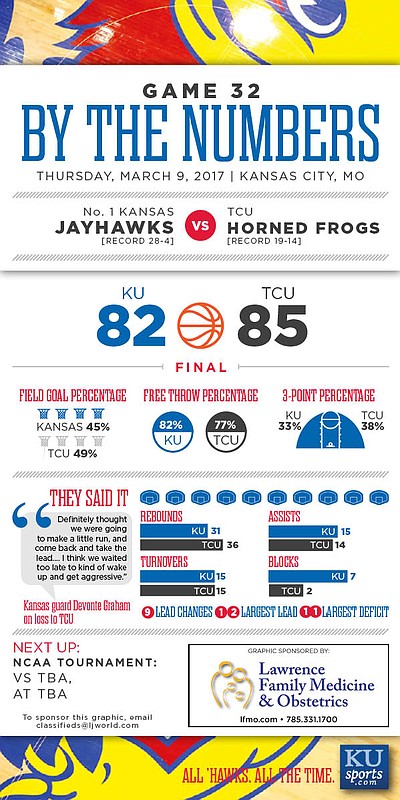 Hawks are going to face plant in the Big Dance, too.

Svi got 18, but he gives up about 25 a game, gave up 5 in the last minute. Constantly gets lost on pick and role. He couldn't guard my Jack Russell. Every team we play wants to know who his man is and it goes from there. Pretty sure every coach in Division I has that plan. Making it to the second weekend in the Dance would be nice, but don't expect it.

To be fair, guarding a Jack Russell is no easy task. But I agree, Svi was awful and he is easily our worst perimeter defender. He's always slow to get out on a three pointer; and when a guy is face up with him one on one, you better believe he's got him beat to the bucket. The main reason he has surrendered so much playing time to Vick is because of his defense. In late game, close game situations Svi is a defensive liability and if he continues to miss free throws at this pace he will be just a general liability inside of two minutes.

Ok, Ok, shrug it off. You win as a team, and you lose as a team. Clearly, Josh's absence was a huge factor, but give TCU credit. They played a very good game, and they didn't fold at the end like so many of us probably expected. It's a tribute to their coach who is changing the mindset in Fort Worth.

I feel for Josh and Svi (regarding the last foul, which was obvious), but hopefully this will heighten their resolve to make a splash in the big dance. We don't have to worry about Frank, Landen, and Devonte as they always bring it. Also, Lagerald is rising star, and if Carlton can start finishing plays, KU will be just fine.

Every board has KU still a #1 seed in the Midwest based upon their RPI and their quality wins against top competition, not to mention their winning the conference by 4 games. We won't be the overall #1 seed, but who cares. We were last year and were still paired against probably the best #2 seed, Villanova.

Those of you who suggested that the Big 12 tournament was meaningless and that we needed rest have gotten your wish. Therefore, accept it and move on.

The sky is not falling although everyone is disappointed. We are not a deep team and not having our second best player play obviously is something we can't have and expect to win. I still fully expect to be a one seed.

Having a few more days to rest and having this loss strengthen our resolve may be a good thing in the end. Time will tell. The good thing about NCAA tournament games is that having little team depth is usually not that important due to the lengthy and frequent time outs - as long as the starting five are all playing well.

This team is fully capable to making a deep run.

I love Coach Self, but I got to scratch my head on his comment indicating he did not know the rule had changed on a ball coming off the glass.

As I recall, Roy Williams did not like the Big 8 tournament because it sent teams into the NCAA tournament tired. I was disappointed that KU lost but maybe the players can be more rested. now.

I wonder how many times the new rule calling a technical foul on a coach for complains too vigorously will be called during the tournament.

Sri and so many others have fouled opponents attempting a 3 point shot throughout the season, more so than I can ever remember. His defence has been woeful at times.

The mention that we had no bench was an understatement. Other than 2 blocks on one play and a basket by Coleby, there was NO HELP. It was not only zero help, when Bragg was on the floor, it was a minus. He is the biggest disappointment of the season, if the injury to our big guy isn`t.

We`ll be good with Jackson back in, but the loss to TCU has to put a shadow of doubt on the post season against any of the upcoming opponents since we seem to allow teams to run their offence in the comfort of what they intend to do and therefore shoot the shots they practice in rhythm.

As Self said, when we score 80 points, it should translate into a win.

Svi has been a liability the last two years. His defense is the worst on the team as he is slow to close. The best thing to happen is for Svi and Bragg to move on after this year. I like Svi but unless he can play a complete game we don't need him. Bragg is just plain bad all around with a lot of drama to bring the program down. Watch, Self will arrange for him to transfer.