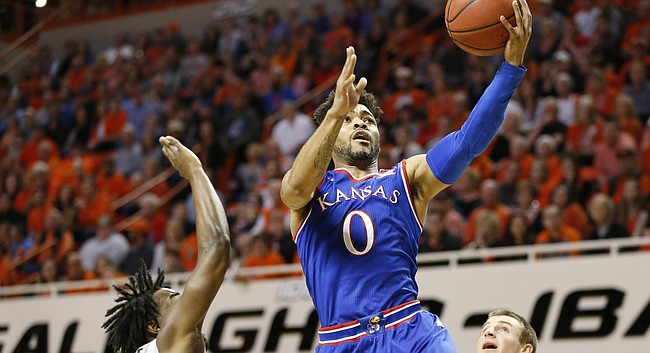 Stillwater, Okla. — In his four years at Kansas, point guard Frank Mason III has accomplished much for the Jayhawks. But he never had experienced a win at Oklahoma State. Until Saturday night.

Displaying the type of toughness and ability to come through with crucial plays that have defined his stellar senior year, Mason led No. 1 KU to a 90-85 victory by doing it all.

The 5-foot-11 senior from Petersburg, Va., not only led all scorers with 27 points, Mason battled for eight rebounds and set up his teammates with nine assists, allowing Kansas to enter the postseason in style.

The Jayhawks (28-3 overall, 16-2 Big 12) broke a three-game losing streak for the program at Gallagher-Iba Arena, and achieved 16 league wins for the third time in its history. 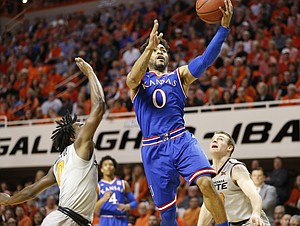 • The game turned when: The Jayhawks had the veteran experience to handle a second-half push from the Pokes.

OSU (20-11, 9-9) took a one-point lead less than two minutes after intermission on a Phil Forte 3-pointer, and KU countered with two Mason baskets and a Josh Jackson (17 points) jam.

When Oklahoma State tied the game at 55 on another Forte 3-pointer with 15:01 left, the Jayhawks again showed no signs of panic. Mason nailed a 3-pointer and scored some free throws, and soon after layups from Mason and Carlton Bragg (11 points) had built the lead back up to seven.

• Offensive highlight: As he so often does, Jackson came through with the most jaw-dropping displays of athleticism for Kansas.

In the first half, Mason softly placed a precise lob near the rim and, of course, his high-flying freshman teammate knew just what to do. Jackson took off from the left baseline to flush a dunk that built KU’s lead to 30-22.

Later, Jackson one-upped himself in the opening minutes of the second half. With Mason set on trying to silence a rowdy OSU crowd, the veteran point guard drove into the heart of the paint just to draw the Cowboys’ defense attention, knowing all along he had Jackson waiting for him on the right baseline if he needed him. When Mason waited until the perfect moment to dish, Jackson hammered home a characteristically nasty jam, helping KU extend its narrow advantage to three at the time.

• Defensive highlight: One key development for KU in its final true road game of the season turned out to be some signs of focus on defense from sophomore Bragg, who has had issues with consistency on both ends of the floor this season.

The locked-in Bragg first emerged in transition near the midway point of the first half, when he sprinted back to stop the ball, as Brandon Averette had visions of a wide-open layup playing in his mind’s eye. The KU forward’s hustle allowed fellow sophomore sub Lagerald Vick to race down and catch up, and swat away a potential layup.

Later, Bragg ran the floor to get back on defense again, and picked up the personal reward of a blocked shot. The backup big raced to the paint to swat an Averette lay-in out of play (though wasn’t credited for a block by the official stat-keepers).

• Key stat: Points in the paint. Sure, the Jayhawks did a nice job of knocking down open 3-pointers (9-for-21), too, but making OSU pay for defensive breakdowns with buckets inside paved the way for a tough road win.

KU scored 30 points on layups, eight on dunks, and out-scored the Cowboys 42-28 in the paint.

• Up next: The Jayhawks will head to Kansas City, Mo., for the Big 12 Tournament, with the quarterfinals beginning on Thursday. KU will face the winner of a Wednesday matchup between Oklahoma and TCU. 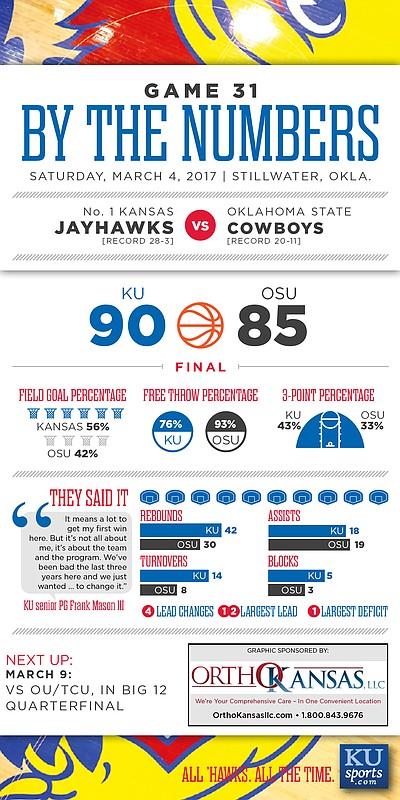 If Svi can get locked in we are a downright nasty team for anybody to play. March is here and these boys look focused! Rock Chalk baby! Mason's first and only win Stillwater!

Very, Very true. - -The normal three doing what they have been doing most the year, Then Landen being Landen , nothing fancy just steady, solid. The thing is , If our bench of Vick & Bragg- - -little bit of Coleby when need or even a little of Lightfoot 2-3 minutes if they come around then for sure. - -Bragg look good last night provided help , Vick was pretty good. - -Like you say there have been times when we almost look scary. - Instance when we were down to WV - -really clamped down of the D - - same against Oklahoma, - I like this group. - -There is just something about them. They just seem to have this approach , attitude of never say die, never panic , never give up. - - I think their maturity really showed up yesterday, Jr's & Sr's and a very talented Fr. - -I truly believe their toughness is in at least part form Frank , rubbing off on them, you just don't see a player tougher. I think we have a real shot.

Congratulations to the Jayhawks on a job well done today. They answered every haymaker Oklahoma State threw at them with a punch to the gut of their own. So nice to see Carlton Bragg and Lagerald Vick have solid games today, too. And good to hear Bill Self in such high spirits in his postgame interview with Greg Gurley as well!

Mason is so impressive today! A complete PG! That's the kind of performance I've been expecting out of him. He clearly deserves Naismith trophy, AA award, First Class Senior award, whatever award!!! It's so awesome to see so many things going in the right direction for KU MB!! Rock Chalk!!

Does anyone remember the gauntlet of games midseason ....that 10 game stretch ......well the Jayhawks passed every test and then some ....good job guys .....and better coaching ...

Not quite, we flunked the test at West Virginia and crapped our pants at home against the Cry-Clowns, but other than those two games, yes, we did pass our tests.

I agree for sure Marius. - - On top of that, I have a question. - -If someone were to say at the start of the year, that KU was going to win this Leauge by 4 games who would of thought they were nuts? - -You tell me , how many of you thought e would win this title by 4 games? - - If you answer you I call BS. - with how competitive this league is/was surpose to be, the best or 2nd best Conference and win by 4 games? You at you called it? - -Ya Right if that's what your trying to sell - - I ain't buying - Awsome Job

Mason deserves the Naismith and the Wooden awards. Maybe the toughest Jayhawk ever.

My sons and I drove down for the game and loved it. There was a pretty sizable contingent of KU fans in the arena today. In our third visit to Stillwater this was the first time we've seen the Hawks win. But I must say, every time the OSU fans have been welcoming and classy. They worked hard to support their team today. I wish them well in the NCAAs.

Kurt, great post! Glad you got to see a win and it's nice to hear positive things about other team fans in a day everyone's so uptight. I would like to try to hit some road games. I've never been anywhere other than Allen Fieldhouse

I will not miss Forte at all and that comes with total respect. I cringe everytime the guy touches the ball because I feel like he's going to nail some impossible 3. My girlfriend and I were joking during the game that Forte was like the Ellis of OSU. Little known fact, back in 85, Forte and Bill Self were teammates. He could hit a 3 from a quarter mile