Kansas' Josh Jackson, right, poses for a photo with NBA Commissioner Adam Silver after being selected by the Phoenix Suns as the fourth pick overall during the NBA basketball draft, Thursday, June 22, 2017, in New York.

It may have taken a dozen or so questions, both from ESPN’s broadcast and radio interviews on his way out of the arena, but former Kansas guard Josh Jackson did not waste time getting to the point when talking with reporters after being selected fourth overall by the Phoenix Suns in Thursday’s NBA Draft in Brooklyn, New York.

Falling at least a spot or two farther down the draft board than he, and many others, expected he would, or at least should, Jackson was asked Thursday night why he believed he was the best player in this year’s draft class. 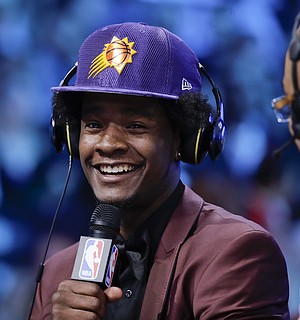 Kansas' Josh Jackson answers questions during an interview after being selected by the Phoenix Suns as the fourth pick overall during the NBA basketball draft, Thursday, June 22, 2017, in New York.

"I think my versatility, just my competitive spirit," Jackson said. "I don't think the other guys in this draft care as much as I do. I don't think they play as hard as I do, period. I think that's what really makes me special. I refuse to fail, period."

As if that declaration was not a strong enough indication of Jackson’s confidence and sudden desire to prove the three teams who passed on him wrong, his answer to the cliche’ question about which NBA player he was most looking forward to facing added another layer to the Jackson that Kansas fans saw glimpses of during his lone season as a Jayhawk.

“Well, Draymond Green, of course,” said Jackson of the fiery Golden State star. “I've been knowing him for a long time now and I've watched him grow since he was in high school and playing at Michigan State. He's kind of exactly how I am in terms of being competitive and a little bit of trash talking, so I'm really excited to get out there and be able to play against him. Obviously, there are a lot of great players in this league, LeBron James, one of the best players in the world, Kevin Durant. I really want to get out there and see where I stack up against some of the best players in the world.”

Jackson did that on the college level as well as just about any freshman to come through Kansas.

Averaging 16.3 points per game during his lone season as a Jayhawk, Jackson finished second on the team in scoring to national player of the year Frank Mason III (No. 34 overall to Sacramento) last season and was in the top three on the team in rebounds, steals, blocks, assists and minutes played while starting all 35 games he played.

Jackson became the fourth Top 5 pick under Self at Kansas and also is the 22nd KU player and 11th KU lottery pick drafted during the Self era.

He joins Andrew Wiggins (No. 1, 2014), Joel Embiid (No. 3, 2014) and Thomas Robinson (No. 5, 2012) as the highest-drafted Jayhawks on Self’s watch and will forever be a part of the record-setting 2017 draft class that featured 10 freshmen being picked in the first 11 picks of the draft. The only player who was not a freshman was French star Frank Ntilikina, who was selected No. 8 overall by the New York Knicks.

While the top of the draft went as expected, with Washington’s Markelle Fultz going No. 1 to Philadelphia and UCLA’s Lonzo Ball No. 2 to the Los Angeles Lakers, the draft really began at pick No. 3, where Boston elected to take Duke scorer Jayson Tatum over Jackson.

Jackson, who said he did not work out for the Celtics because of scheduling conflicts, added that he thought that may have had something to do with him falling to No. 4.

One other factor people pointed to that may have contributed to Jackson’s relative slip was an off-the-court issue, stemming from an incident at a bar that landed him in legal trouble during his freshman season at KU. But Jackson also addressed that during his post-draft meeting with the media in New York.

“I don't think it really represents who I am,” he said. “You know, I made a mistake that day. I did. I admitted to it from day one when it was brought up. I think the whole situation was really blown out of proportion, just because I am who I am. Reporters want to make a story and get themselves a name. But everyone who was close to the situation and everyone who I've talked to about it, they know exactly what happened that day. There was nothing that -- it wasn't what it was made out to be. It wasn't as bad as everybody made it out to be. But I have owned up to the mistake I made and I accept the responsibility for it from day one.”

While that issue, like his college career, is now behind him, Jackson, to no one’s surprise, seems intent on making the Suns look like geniuses for taking him while making the three teams who passed on him regret their decisions.

Wow, Phoenix and Sacramento. That couldn't have gone much worse. You guys deserved so much better and I hope it works out eventually. Rock Chalk.

Danny Ainge from the Celtics flew to Sacramento to work Josh out, and Josh stood him up. So, now he is in Phoenix. The "scheduling conflict" was Josh cancelling scheduled workout with the Celtics....Good luck with that. (Disclaimer: I am a Celtics fan as well as a Jayhawk fan.)

Interesting. Where did this info come from? If true, you've just got to wonder what these guys are thinking.

Never mind . . . just found this straight from the mouth of Danny Ainge:

“They canceled a workout on us, when we flew out to Sacramento and they just decided to cancel it as we flew. (Coach) Brad (Stevens), (assistant general manager) Mike Zarren and I flew cross country.

“We try to not overreact to those types of things and make a big deal about it,” Ainge said. “Agents and players have all sorts of motivations to get to certain places as we’ve seen in past.

When asked of his emotions after being stood up, Ainge said: “Well there were thoughts, I was mad. We flew cross country. We had to get up at 4 o’clock in the morning and fly back home.”

When asked what he did in the meantime, Ainge said: “There’s nothing to do in Sacramento. I might get in trouble (with that statement).”

I'm sure Jackson collaborated with his agent AND his Mom. So, still gotta wonder what they were thinking. Maybe they smell a trade down the road that we can't see from here.

Dunno his reasoning. I know Boston has a bad rep for race relations, but a lot of cities have that, and Paul Pierce thrived there. In Phoenix he's still going to be fighting for shots on a bad team with Booker and Bledsoe, etc. so basketball-wise I can't figure it. The worst part is now I have to root for a Dukie (Tatum) if I want the Celts to do well.

The reason he didn't want to go to the Celtics is because 1) they have shown that they don't like playing highly touted rookies very many minutes since they are trying to win and have a good roster (hard for a rookie to develop without minutes) and 2) Jaylen Brown was their highly touted pick last year and he plays the same position (or at least one of the same positions) as Josh Jackson.

So the options was either go to the Celtics and sit on the bench along with Jaylen Brown, or go to the Suns and start from day one and try to build something with the young guys they have there already who don't play Josh's position.

Here's what the Phoenix fans think of the pick:

Both Josh and Frank will have great careers. They will be Jayhawks for life and will likely be back in Lawrence from time to time as the other past greats have.

Will have to make a few treks from Tucson to Phoenix to see Josh play, especially when the Kings are in town.