During his first week on the University of Kansas campus this summer, 6-foot-10 freshman Billy Preston made his unofficial debut with the Jayhawks during a scrimmage at head coach Bill Self’s basketball camp.

A McDonald’s All-American from prep powerhouse Oak Hill Academy (Va.), and a top-10 player in the Class of 2017, Preston didn’t stand out much in the exhibition and was less than thrilled with the two points he scored against a stacked KU alumni team.

Preston realized shortly thereafter his jitters got the best of him and resolved not to play like that again. KU’s latest touted freshman made the most of a second chance Wednesday afternoon, a week removed from his disappointing debut. Playing alongside returning Jayhawks Devonté Graham, Lagerald Vick and Udoka Azubuike, as well as Mississippi State transfer Malik Newman, Preston put up 17 points in the second camp scrimmage, an 80-73 victory for his Red team.

“I just made a commitment to myself to play better,” said Preston, who did most of his damage in the paint but also knocked down a 3-pointer. 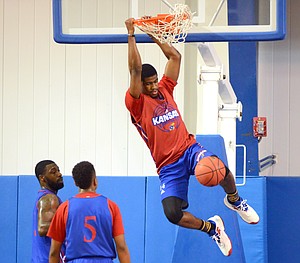 Expected to make a positive impact as a freshman in the upcoming season, Preston told reporters afterward he played to his strengths this time around and felt more comfortable as a result.

“Coach (Bill) Self, Coach (Kurtis) Townsend, when they were recruiting me, they told me they would play me like a stretch 3 (or) 4,” Preston said. “If I rebound it, I can push it, pick and pop, pick and roll, basically the whole game they said they’ll let me play.”

Although he described his position as a “point forward,” Preston didn’t get to display many of those play-making skills as a ball-handler during the scrimmage. Of late, he finds himself learning to spend more time inside or work into the offense through high-low opportunities.

“Coach Self in practice doesn’t let me take any breaks,” Preston said. “Any time I’m roaming around the perimeter, any time I find myself doing that, he’s the first one to say something to me and get me in the position he needs or he feels would be best for the team.”

Although he’s been at KU fewer than two weeks, Preston has started to adjust, according to sophomore big Mitch Lightfoot, who led the losing Blue team with 22 points and hit a pair of 3-pointers himself.

“I feel like Billy, he’s really settling in. You saw that out there,” Lightfoot said. “He’s really finding his rhythm. I feel like that’s what the first week or two of college will do to you. Being with coaches, and the amount of time we get to spend with them in our workouts, you really get to learn the speed of the game and what we expect each and every time.”

Prior to the scrimmage, Self predicted a Red team victory and introduced Preston as a freshman with “a ton of talent,” adding, “He’s just got to play hard and rebound, and we think he’ll do that.”

As Preston continues tailoring his approach to fit in at KU, he said he often looks to Graham, Newman and Vick for a blueprint.

“Just keeping up with those guys, because I know those guys are going to work,” he said of his strategy. “If I work as hard as them, I should get up to par with everybody.”

Sitting out: Two current roster players weren’t able to contribute in the scrimmage. Former Memphis wing K.J. Lawson, who has an injured left ankle, only got to watch his brother and fellow transfer, Dedric, play instead of joining forces with him for the Blue team.

Graduate transfer Jack Whitman, formerly of William & Mary, didn’t attend the scrimmage. A KU official said the 6-9 senior wasn’t feeling well, but is expected to be fine. During Tuesday’s camp festivities, while the Jayhawks performed drills in front of campers, Lightfoot accidentally caught Whitman with an elbow to the face.

Cunliffe, who missed Tuesday’s camp activities due to illness, recovered from his bug in time to convert several smooth layups and a 3 in the scrimmage.

Billy Preston discusses his adjustments to the college level by KUsports.com

The blues score 73 points, 22 by Lightfoot but no coverage on the film. Bias against my man Mitch.

Lightfoot put up some numbers. Is he considerabley better or was that just a fluke of a performance?

cool that Tyshawn was out there, he is one of my favorites from the past. sounds like are team is going to be good again.

One has to ask how Mitch was able to put up 22 points vs Dok and Billy? Is he playing that much better or are we not playing defense yet? Or are Tyshawn and Elijah just that good at feeding him the ball? On the other side, Malik is putting up Frankish numbers as well. These guys might win a game or two more than last season.

Newman is going to be incredibly fun to watch this year. I'm seeing first or at the least 2nd team all Big XII out of this kid.

You nailed it pretty good, Brett. This team potentially has more weapons than last year's team, especially if, as Ryan says, Malik Newman has the kind of year that even remotely approaches what Frank Mason did.

Devonte is a great leader at the point, and I suspect that Marcus Garrett may even surprise with some valuable minutes there. If Svi gets better and Udoka, Billy, Jack, and Mitch can handle the inside game, KU will indeed be a load for anyone.

I want to see Devonte be more aggressive and not settle for outside jumpers. I have a feeling that will be case now that he doesn't have to defer to FM3.