Five Jayhawks are among 13 athletes being inducted into the Kansas Sports Hall of Fame Class of 2017.

Listed in alphabetical order with their sport and graduation year, they are:

Fiss played both minor league baseball and 11 seasons with the Cleveland Browns of the NFL. In between those professions, he served two years in the Air Force.

Kelley made two Final Four appearances and won an Olympic gold medal in basketball. He is the only KU player to be selected to two all-tournament NCAA teams (1952, 1953). His brother, Al, already is in the Kansas Sports Hall of Fame. 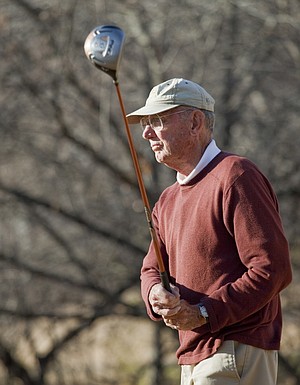 Jerry Waugh, Lawrence, watches the flight of his ball after a drive off the tee at Alvamar on Monday, Nov. 19, 2012.

Waugh, who lives in Lawrence, played for Phog Allen and was an assistant coach to Dick Harp for three seasons (1957 to 1960). Waugh also coached men’s and women’s golf at Kansas and has made a hole-in-one eight times. A former president of the Kansas Golf Association, Waugh was inducted into the Kansas Golf Hall of Fame in 1998 and the KU Booth Athletics Hall of Fame in 2000.

Doughty, Fiss and Kelley will be honored posthumously.