Will forward Billy Preston be KU’s next great freshman?

Kansas commitment Billy Preston, the No. 8 player in the Class of 2017 according to Rivals.com, at this year's McDonald's All-American Game in Chicago.

With the arrival of June, all eyes in the Kansas basketball world begin to shift to the incoming crop of new Jayhawks, many of whom will land in Lawrence this weekend, in time for Bill Self’s youth camps, summer workouts and whatever other welcome-to-college-basketball adjustments the powers that be at KU choose to throw at them.

For a program that has welcomed such high-profile players as Andrew Wiggins and Josh Jackson in the past four years, the incoming 2017 class lacks sparkle.

That’s not to say that forward Billy Preston, combo guard Marcus Garrett and four Division I transfers — only one of which will be eligible in October — will not add a lot and play important roles for the Jayhawks.

But while Garrett might wind up being the next Devonte’ Graham and William & Mary transfer Jack Whitman could follow in Tarik Black’s footsteps, human nature — particularly with KU fans — tends to take people’s attention to the highest-rated player on the board. In this case, that’s Preston, who finished his prep career at Oak Hill Academy ranked as the 10th best player in the Class of 2017 by Rivals.com.

Unlike Wiggins and Jackson, Preston does not carry with him the automatic assumption that he’ll be a one-and-done Jayhawk. 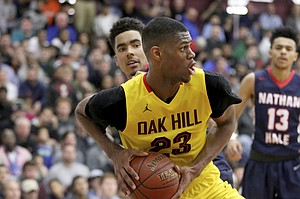 “Talent-wise, he could definitely be that,” KU assistant coach Kurtis Townsend recently told the Journal-World. “His issue’s always been, he’s switched so many schools and he’d never really had great coaching until he went with Steve Smith (at Oak Hill) so he’s never really been held accountable for how he plays. The ball sticks sometimes with him and it’s, ‘Let me see if I can go one-on-one.’ With coach (Self), if he gets the ball and he can’t shoot it, pass it or drive it, he’s gotta get rid of it. So that’s something he’ll have to learn and (who knows) how long it will take him to learn how to play.”

That mentality won’t fly at Kansas and no doubt will lead to much more bench time than court time for Preston.

Townsend knows this. And Preston claims he does. The key question entering the summer will be how closely Preston’s expectations match up with the reality of the journey which he’s about to take.

“It just depends on how long of a learning curve there is for him and how well he takes coaching,” Townsend said. “I told him, ‘I’m interested to see how you react when coach (gets on you) the first time. Are you gonna quit and pout?’ And he said, ‘No, no, that’s why I came there. I need that.’ They say the right things but until it happens you just don’t know. The (Morris) twins said that too and they fought it or they could’ve gone (pro) earlier. They ended up being great players, but it took ’em three years to figure out, 'all right, we ain’t gonna fight him.’”

One of the things Self, Townsend and Rivals all liked about Preston were his physical gifts.

And that’s both a good and a bad thing for the incoming freshman, who, according to a source with knowledge of his status, should be good to go in terms of eligibility when he arrives on campus.

Good because his potential is off the charts and his versatility will be a luxury for Kansas that approaches the way Jackson was used last season.

Bad because it remains to be seen if the KU coaching staff's high demands and expectations from Day 1 will be something the 6-foot-10 forward can handle or if it will inhibit the steady progress required to make a serious splash.

“With his body and his athleticism and his skill set, that kid, if he wanted to, could average a double-double,” Townsend said. “But I don’t know if he’ll do it because we’re gonna have to kick his butt to go to the glass every time. I would say to him (after high school games), ‘Dude, 6-10 and you had three rebounds? Go get 10 rebounds.’”

Regardless of how much talent Preston possesses, how long it takes him to figure everything out and what his overall impact on the 2017-18 team actually winds up being, Townsend made it clear that the Jayhawks were glad to have him.

“I think he’ll be OK,” Townsend said. “Could he be one-and-done? Yeah. Will he be? It just depends how long it takes him to figure it out. It could take ’til Christmas. The advantage he has, though, is we’re going on this trip to Italy (in early August). So he’ll be a little bit ahead of the game. But the second game of the year against Kentucky he might look lost. And people might say, ‘Oh, he wasn’t as good as you thought.’ But we’ll be able to tell by January, once league play starts, if he’ll be a guy who could (leave early).”

I'd say Josh Jackson set the standard for One and Dones at KU thus far. Wiggs might end up being the better pro but Josh could do it all.

Not certain that Preston is "coachable."

good grief, give him a chance!

It's a little disconcerting to hear all of these concerns at this point, especially about a top 10 player. All the interviews I've watched of Preston seem to indicate he has a great attitude and wants to be coached. I can definitely see the Morris twins fighting Self all the way, simply because that seems to fit their personalities (not that I know them personally). I agree the one obstacle for Preston will be his ability to pick up Self's system, but that goes for all freshman. We got so spoiled by Josh Jackson, who is a freak of nature.

I appreciate the honest comments by the coaching staff and the media but if it was up to me, i would give Billy the benefit of the doubt, take him at his word, keep it positive and supportive and let circumstances prove me wrong.

It already seems like he has gotten off the wrong foot with Jayhawk Nation and he hasn't even shot a basketball or made a freshmen mistake.in Crimson and Blue yet.

I agree with Dillon and Chris, however about JJ. He had the hunger to win of a walk-on paired with the ability to excel of a lottery pick......a rare combination indeed.

Is Preston's eligibility all cleared up? I'd really like to hear that there won't be any NCAA drama about whether or not he's able to play.

Jackson was so much smarter basketball wise than any other we have had. He had the confidence to play to others realizing he would still be able to contribute even if he ball was in Frank's hands most of the time.

I guess what Jackson did best was the trite phrase of letting the game come to him. If Preston can do this he will be a big hit.

If he can wait for the proper opportunity to take charge with his skill set he will be great. Timing is the big thing. He has to avoid forcing himself on the game instead of asserting himself at the proper times.

I like it that he has good size. I think its a better gamble on that, than an underweight big, still growing and needing a couple of years to get to the NBA body.

Even with his size, he's not a "big" at all from a basketball standpoint. He does not play down on the block, or post up. His game is jump shots and taking people off the dribble. From a skill set standpoint, he's more of a better dribbling/shooting Wiggins that doesn't play as good of defense than he is anything resembling a traditional 6'10" big man. Maybe another comparison would be a better dribbling Bragg since they are a similar size and both prefer jump shots to posting up. Maybe even a young Durant is a best example from a size/playing style standpoint. Either way, he's a wing in a big's body. It will be interesting to see where he is allowed to play at KU. Will he play the Jackson roll in a 4 guard offense or will he be forced to learn how to use his size down on the block in a more traditional "big" roll?

It would seam Preston is a stretch four more so than Jackson was. He has a couple more inches and 25 more pounds. A young Durant may be a good comparison. Hopefully, everyone stays healthy and he will be able to play the stretch four and not be forced to play the post the way Bragg was. We all know how that worked out.

As far as getting off on the wrong foot with Jayhawk Nation, this is clearly a story coming from the coaching staff which is meant to A) motivate Preston, and B) keep fan expectations in line. Townsend is citing the Morris Twins for a specific reason, and it's all about helping Preston to see the path forward. Preston hasn't done anything to get off on the wrong foot with the fanbase.

Let it play out everyone please. Hes in good hands. He can bulk up if need be and he will learn other skills while at KU. At this point, there is no reason to think he wont be an impact player. He was rated high for a reason. Its not an accident. Lets support and encourage the young man.