Self: All but 2 Jayhawks expected to report to campus this weekend 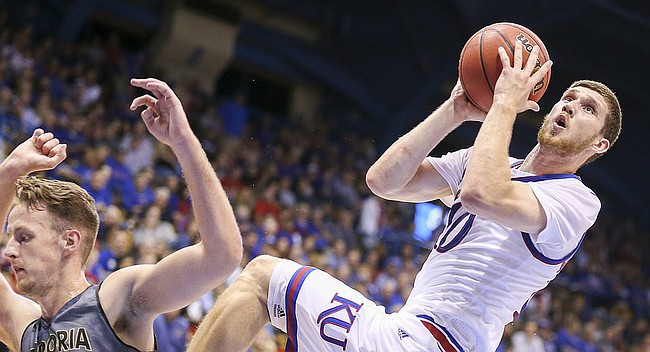 Kansas guard Sviatoslav Mykhailiuk (10) puts up an off-balance shot after being fouled by Emporia State center Bradley Fisher (41) during the second half, Sunday, Nov. 6, 2016 at Allen Fieldhouse.

Kansas basketball coach Bill Self told the Journal-World on Thursday that he expected all but two players on the Jayhawks’ 2017-18 roster to report to campus by this weekend in time for next week’s Bill Self Basketball Camps.

The two players who will be delayed in reporting to campus are incoming freshman Marcus Garrett, whose graduation from Dallas’ Skyline High is scheduled for June 5, and senior-to-be Svi Mykhailiuk, whom Self said would prolong his stay in his native Ukraine to play with the national team for the second summer in a row.

Mykhailiuk, who announced just last week that he would return for his senior season instead of entering the NBA Draft, played with Team Ukraine at last year’s FIBA Under 20 European Championships in Finland.

Mykhailiuk led that team in scoring and played a significant amount of the time as the team’s lead guard and top play maker.

As for Garrett, his uncle Matthew Watts, told the Journal-World that the 6-foot-5 combo guard would report to Lawrence on June 9 after going through graduation ceremonies a few days earlier.

As for the rest of the team, several returners and newcomers all are expected to report to campus this weekend, ready to work camps and get going with summer workouts.

That includes William & Mary graduate transfer Jack Whitman, who confirmed to the Journal-World on Wednesday that he would be in town Saturday night.

Fellow freshman Billy Preston, along with incoming transfers Dedric and K.J. Lawson (Memphis) and Charlie Moore (Cal) also are expected to report to campus this weekend.

Kansas Athletics on Thursday released the full and finalized non-conference schedule for the men’s basketball team for the 2017-18 season.

Included on the list of 12 non-con games are match-ups with Kentucky (Nov. 14 in the Champions Classic in Chicago), Syracuse (Dec. 2 in Miami, Fla.), Stanford (Dec. 21 in Sacramento, Calif.) and Texas A&M (Jan. 27 at Allen Fieldhouse in the Big 12/SEC Challenge).

“Once again, I think we’ve put together a very competitive non-conference schedule,” KU coach Bill Self said in a release. “Anytime you have Kentucky and Syracuse on your non-conference schedule at neutral sites gives the appearance of a terrific schedule. There is a lot of Pac-12 flavor, playing Washington in Kansas City, Arizona State in Lawrence and going to Sacramento to play Stanford. Those are three high-major programs. In the Big 12/SEC Challenge, Texas A&M is predicted to be a top-three team in the SEC this year. That will be a big test during league play.”

— The Big 12 Conference schedule will be released later this summer.

Former NBA standout Jalen Rose, a native of Detroit and former star at Michigan, dished out some serious praise for KU freshman Josh Jackson during a podcast for his show “Jalen & Jacoby.”

The way Rose sees it, Jackson is the “most valuable” player in the 2017 draft class.

“If I’m the Celtics (who have the No. 1 pick), and they’re drafting for somebody else, don’t be surprised if that team wants them to take (Jackson),” Rose said. “I’m looking at you, Indiana. “He’s gonna be a player. I haven’t really decided who I’m gonna compare him to, but he’s gonna be a lockdown defender that can play multiple positions. He’s an improved jump-shooter. And he has more bounce to the ounce at the hoop.”

The fact that Rose hails from the same hometown as Jackson may have something to do with his love of the former Jayhawk. But from the sound of Rose’s comments, it’s Jackson’s overall toughness that impresses him the most.

“See, that’s one of the things I look for in a player that ain’t a measurable that’s gonna be on the stat sheet,” Rose added. “And so, if I’m picking number one, just in a vacuum, regardless of need, if I’m thinking I’m taking the best player that’s actually who I personally would take first overall.”

What I wouldn't give to see Kansas crush Syracuse. It won't change the results of the 2003 NCAA title game, but it would feel good to kick their asses all the same.

Third year in a row playing Kentucky. Let's make it 3 for 3.