Defense made strides a year ago, but Beaty looking for further progress

Kansas defensive tackle DeeIsaac Davis (99) gets up to bat down a pass by Texas quarterback Shane Buechele (7) during the third quarter on Saturday, Nov. 19, 2016 at Memorial Stadium.

Up to a point, the defensive improvements shown by his Kansas football team in 2016 encouraged head coach David Beaty.

He still speaks some eight months later about how proud he was to see coordinator Clint Bowen’s group lead the Big 12 in third-down defense and finish second in red-zone defense. Beaty raves, too, about KU’s star defensive end, Dorance Armstrong Jr., leading the conference with 20 tackles for loss.

The head coach’s usual enthusiasm, though, remains tempered by reality.

“The thing that we have to do is look at those other numbers that tell us things, like scoring defense,” Beaty said after highlighting the unit’s positives during a recent interview.

“I still think that scoring defense is the most telling stat in all of college football,” Beaty said of a category in which his Jayhawks finished the season ninth in the Big 12. “People talk a lot about turnovers and I do believe that — it changes lives. We talk about that all the time. However, scoring defense is huge, and our scoring defense number basically tells a story about how we’ve got to be better there.” 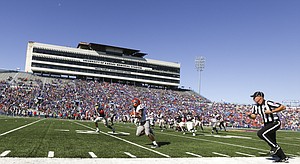 Oklahoma State running back Justice Hill (27) takes off up the sideline as the Kansas defense trails during the first quarter on Saturday, Oct. 22, 2016 at Memorial Stadium. The catch set up an OSU touchdown.

While Kansas excelled a year ago in areas such as third-down defense (first in Big 12, opponents converted 35.6 percent of the time), red-zone defense (second, foes scored on 77.4 percent of trips inside KU’s 20-yard line), tackles for loss (tied for second, 7.5 a game) and takeaways (tied for fifth, 22 total), problems far outweighed advantages.

Along with the aforementioned struggles keeping foes out of the end zone, Kansas ranked ninth in the conference in rushing defense (236.6 yards allowed a game), total defense (456.3 yards), and pass efficiency defense (opposing QB’s had 139.6 efficiency).

The conference’s preseason Defensive Player of the Year, junior pass-rusher extraordinaire Armstrong, and his fellow KU defenders know they have a lot of ground to gain in a number of areas.

“We’re capable of a lot of things. Our main goal is to just get better every day,” Armstrong said. “I think as a team goal, we also want to become number one in a lot more categories than what we did last year.” 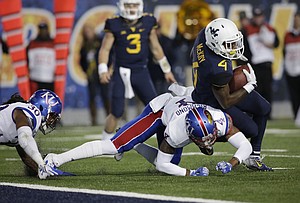 Said Wise: “Guys are hungry and ready to work.”

KU proved this past season it could be effective on “money downs,” as Beaty likes to call third-down situations, create some havoc in the backfield, force fumbles (12 recovered) and make interceptions (10). But he and his players realize that significantly cutting into the team’s average of 37.3 points allowed could do wonders for making the Jayhawks more competitive in 2017.

“I love listening to Clint Bowen talk, because he’s so methodical in his approach and he talks about that — about scoring defense and how we improved in this area but there were these big plays on second down that aren’t in that stat line that we’ve got to be better at,” Beaty said.

The challenge for KU, the head coach added, will be maintaining its defensive strengths while improving across the board.

“I’m looking for that group to not drop off in those areas that we improved on. But now let’s improve to the top three to four in the conference in all those other areas,” Beaty said, “and when you do that, I think you start seeing your win production change.”

If the defense is just as good as last year and the offense doesn't punt 12 times per game I expect the scoring and yards per game to take care of themselves if the D is just as good as it as last year. Number of plays over 20, 30, 40 yards tells me more. I hope we do improve, especially on run defense but the O just has to produce and give them some rest. Hopefully we can muster a good rushing attack.

Right on Randy, big plays and the woeful offense putting the D in horrible situations. I think we were last in the Big 12 in TO and pretty close to last in all of D1. 25 yard scoring drives aren't fair for the D and skew the numbers. Cut the TO in half and improve by 12-14 points allowed per game and we have a possible bowl bound team.

Bowen's defense has never been good. The proof is in the pudding. Every year his defense is one of the worst statistically in college football...over the course of 10 years.

Doug, I think that over the next two years, your arguments regarding Bowen should have a fair hearing. The offenses in the Big 12 have gone absolutely crazy over the last few years, at exactly the time our program was sinking.

I think we'll be better. I'll make a bet with you: the defense improves by 20 spots nationally in yardage and points allowed for the season. If not, my treat at the KC/Lawrence restaurant of your choice. If so, your treat at Gates for some barbecue and pecan pie. ???

I can't bet you because I hope your prediction is right...and then some. It's hard to make a bet when you're rooting for it to be wrong.

Let's hope Mecham takes our offense to a top 10 level, and in response our defense thrives for not being on the field too long.

I'm ready, I'm excited. Can you feel it? -Believe it or not, I'm really looking forward to the Season. I'm ready to go. - -I just think YOU WILL see better from the Defense, I mean really a lot better, we have the players, another year of experience I truly feel that our defense has a chance to be good - - -really good. -- I mean yes, very true you look at some of the numbers like total defense 456.3 per game, that's quite a bit BUT in this conference with the way so many teams throw the ball again a lot of yardage and we were 9th but how big was the gap of us between 9th and say 8th - -7th - - 6th? The scores of a lot of the games, not just ours was crazy - - lots of points - -shoot outs. - -So this is where I agree with Randy for sure, if our Offense can move the ball with consistency, substain drives, give the D some rest instead of having them on the field for 3/4 of the game, your gonna see our defense numbers improve quite a bit. We have the makings of some real time stud on the D, some are already there. I don't care how good ANY teams Defense is, if you keep them on the field a lot, they gonna wear down -Offense - - Offensive line got to protect, QB has to produce, running game has got to get some yards - help the D. They talk about our red zone D was really bad, well part of that again is on the Offense, we get pinned deep and can't move then have to give it up, the other team starts in great field position short drives any D gonna be hard to stop the other given that kind of field position. - -I'm ready to go I think both sides going to be better looking for a good season I'm not talking miracles 4 wins - - possibly 5 would be steady improvement how about ya all?

I'm right there with ya! I've posted a couple times that if we stay relatively healthy I truly believe, and the players and coaches believe as well and that's what matters, that we can go 7-6...THIS YEAR!

Defense hasn't changed much in 7 yrs! Our improvement came with recruiting, not DC. Can't tackle; out of position much of the time; and the directions to the players have them working on the wrong thing. Other than that, not a lot of hope. Will believe it when I see it.

We didn't even see an improvement. Bowens defense still ranked in the 100s last season...and the year before that it was dead last in the nation.

Example vs Ohio. They had the ball for a whopping 43:38. We had the ball for an anemic 16:22. Yet we only lost 37-21. I say our D did pretty good with exception of the ground game where they racked up 329 yards with an avg carry of 5.8. First downs ohion 27, KU 9. That tells the story. We will.win this game this year if we commit to stopping the run. We also had three turn overs to their one.

The difference in scoring will come from Bryce Torneden and Mike Lee. If you have two guys who can stop the big plays and bring the pain, then you reduce scoring. Torneden and Lee will make guys think twice, which means we will have the advantage.