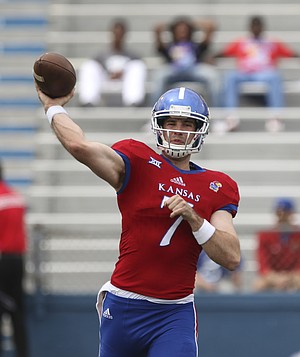 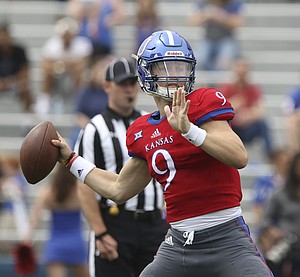 "Neither outperformed the other enough during an evenly matched spring to earn the early distinction of No. 1 QB." -- Smith

Gaak...sputter...sppfftt. That has to be Keegan's reaction. He's named Bender as the Hawks starter and savior since the day he signed.

I think Jerry Jeff has a point there. The way I've read it, it has been a forgone conclusion on Bender being the starter before he ever enrolled at KU. Seems like it is a pattern as I'd make the same observation with the signing of Jake Heeps and the other guy before him whose name I can no longer remember. This article represent a more "up for grabs" situation which I think is closer to reality. The fact is, in our situation, regardless who the starter is opening day, with our offensive line somebody is going down sometime and another QB has to step up. It will be great when we finally have an incumbent who has proven himself and it his job going into the next season without question. We are nowhere near that. We are more in a who can perform and produce consistently in a real game, Big 12 situation. We may four guys in the red jerseys who can do that, and maybe none.

I appreciate the selflessness of these two dudes in the midst of the QB competition. And I hope HCDB will make the right decision in whom to name the starter between these two.

Definitely appreciate the selflessness, but also hope Starks isn't too much of an odd man out as the 4th QB. At least he should have strong team connections with the Louisianimals on the team and at WR in particular. The most encouraging thing there is just realizing how relational Coach Beaty is, expecting that it's passed along throughout the coaches and players.

As much as Bender might not have separated himself throughout the Spring, it did seem like he had the better game in the end, and progressed towards the #1. It is a bit to be expected for a new guy coming into the program. He might not be the next Cam Newton, but should end up being an upgrade.

Generally speaking, that is recruiting at this point. I seem to recall hearing that it was Coach's message to the team going into off season conditioning. I'm going out to recruit your replacement. It's up to you to keep progressing, earning it, so you're not replaced.

This is as it should be. It was tragic that Daniel Sams who could have had one steller season as No. 1 in Manhattan but chose to transfer close to home where he ended up getting arrested in relation of a burglary that resulted in a homicide. Being patient is not easy for young guys. Being a team player when you're burning inside to play is tough. But, patience has its rewards. Sams was trying to get into the next level but when to go from playing Oklahoma to playing likes of Alcorn State your chances are not good. I think our guys know if you've got "it", it will show. If not, well we're getting an education and having a little fun along the way.

Although i really liked what i saw from Stanley would like to see a number of qbs have some playing time by design, not that we don't know who our starter is, but just to get our backups real time.

For what it's worth... my cousin's cousin (insert jokes now) is a member of the football team. I recently asked him his take on the QB competition. To paraphrase, he said Bender is probably going to get the first shot at starting. He said that Bender can make all the throws and he hasn't seen anybody be able to make the throws Bender can make since he has been there (which obviously isn't saying a whole lot given the talent but still encouraging).

As most posters have stated the LJW (esp. Keegan) has be high on Bender and we all take it with a grain of salt because of how badly we've been burnt in the past. Hopefully the past won't repeat itself and the LJW can graciously say "I told you so"!

Of course i want our quarterback to be able to make all the throws but i think what we need most is a gamer, a leader, a competitor. Hope Bender has that. I liked what I saw in Carter Stanley. He had that Reesing quality I thought. Guess, we'll see. Thanks for input, Brock.