Kansas tight end Ben Johnson (84) is brought down after a catch during the first quarter on Thursday, Sept. 29, 2016 at Jones AT&T Stadium in Lubbock, Texas.

Just as he did a year ago, ahead of his junior season, Kansas tight end Ben Johnson found his name on the John Mackey Award preseason watch list Tuesday, when the rundown of college football’s best at his position was unveiled.

The 6-foot-5 senior from nearby Basehor only caught 10 passes for 112 yards in 2016, when KU’s passing plays rarely targeted tight ends and Johnson missed three games. But coaches often praised the sturdy, 245-pound veteran this past spring, and Johnson aims for a bounce-back season, more reminiscent of his sophomore year, when he received honorable mention from the Big 12’s coaches.

Although he plays a position that is more a luxury than necessity in KU’s Air Raid offense, Johnson said recently on KLWN’s Rock Chalk Sports talk he expects to find his way onto the field and make an impact this fall.

“I think being able to do a little bit of everything is going to help me,” Johnson said.

Presented annually to college football’s most outstanding tight end, the Mackey Award’s watch list for 2017 includes more than 50 candidates nationwide. The winner will be announced on Dec. 6. The award will be presented live on Dec. 7, at The Home Depot College Football Awards Red Carpet Show on ESPNU. 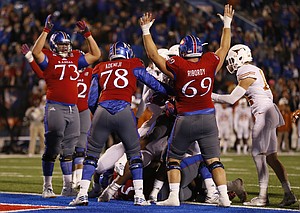 The Jayhawks signal a touchdown by Kansas running back Khalil Herbert (10) during the fourth quarter on Saturday, Nov. 19, 2016 at Memorial Stadium.

A former in-state walk-on from Louisburg, Ribordy started 11 games for the Jayhawks in 2016, eventually solidifying himself as the team’s center, where he spent the final five games of his redshirt freshman season.

Ribordy, listed at 6-4 and 305 pounds, didn’t record a bad snap, posted 27 knock-down blocks on the year and missed a team-low 10 assignments while participating in 800 plays, according to KU.

Teams throughout FBS submitted the names of their starting centers for the Rimington watch list. The eventual winner will be determined using the All-American teams of the Walter Camp Foundation, Sporting News and the Football Writers Association of America. The center with the most first-team votes will be named the 2017 Rimington Trophy winner, at the Rococo Theatre in Lincoln, Neb., on Saturday, Jan. 13, 2018.

Still a long ways to go. But, Coach Beaty and staff have come from a long ways as well. HC Beaty and his syaff are showing great patience and turning this football ship around.

I'm happy and excited for the future of the Jayhawks Football program.

Baldwin replaces the only senior we lost from last year's team, and many of the players are still young and growing into D1 FB. I think we'll see a really nice improvement up front. Have an incremental better skill players around them will also make them look better by completing more plays in a shorter amount of time with fewer turnovers.