Moments after the final buzzer, the Kansas bench erupted, and players on the court made a beeline to their bench to celebrate.

Finally, for the first time this season, it was the Jayhawks celebrating a win in the Big 12 conference.

“I just think it means that our players have not lost faith, and that they trust what we’re doing in practice every day, and (they) trust our staff,” Schneider said. “Most importantly, I think they trust each other.” 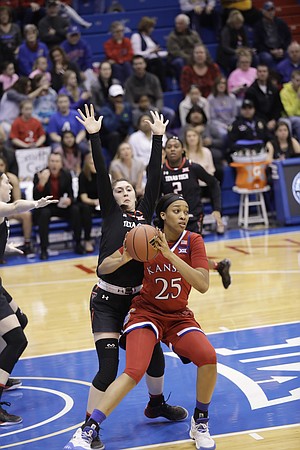 Junior Jessica Washington led the Jayhawks with 24 points, while sophomore Kylee Kopatich added 14 points. The backcourt ensured the Jayhawks got off to a good start, as they combined for three 3-pointers to spark a 13-4 start in the first three minutes.

“I thought especially early in the game we moved the ball well against the zone,” Schneider said. “We played through the zone instead of around it. We created some good looks and some looks that we missed.”

Kansas (7-14, 1-9 in the Big 12) began to miss those looks after its quick start, and scored just two points over the next five minutes to end the quarter. The second quarter was more of the same, as the Jayhawks struggled a bit with the Red Raiders’ triangle-and-two defense.

But the Jayhawks stepped up on the defensive end, and as a result, they led 29-23 at halftime despite shooting just 30 percent in the first half. They held the Red Raiders to 33 percent shooting in the first half and forced eight turnovers.

Throughout the second half, KU's defense continued to give the Red Raiders (11-9, 3-6) fits.

Entering Saturday’s game, the Red Raiders were ninth in the country in 3-point percentage, but they shot just 3-of-17 (18 percent) against the Jayhawks and turned the ball over 14 times.

“Today I thought we made fewer mistakes in terms of assignments,” Schneider said. “I thought for the most part today our guys were really assignment correct and played to the scouting report.”

In the third quarter, the Jayhawks started to get to the basket more often. Senior Sydney Umeri converted a three-point play to give the Jayhawks a 40-28 lead, and then fellow senior Caelynn Manning-Allen scored on three consecutive possessions to open up a 17-point lead.

“It was definitely a confidence booster,” Manning-Allen said, "and just knowing that my team was behind me the whole step of the way makes it even better."

Texas Tech rallied in the final minutes, but 3-pointers by Kopatich and Washington, as well as free throws from Washington was enough to for Kansas to hold on and end a nine-game losing streak.

“This win means a whole lot to our team,” Manning-Allen said, “and we’re extremely happy with what we’ve got (going)."

Keep fighting ladies!! With the height arriving next season, these talented guards will really shine!

Congratulations to the lady Jayhawks and coach Schneider's for their first win in the Big XII since accepting the head coaching job. Rock Chalk.

So happy for the players and coaching staff. Well done! Well-deserved victory!