Bragg, suspended from basketball team, has had more than one encounter with law enforcement this school year 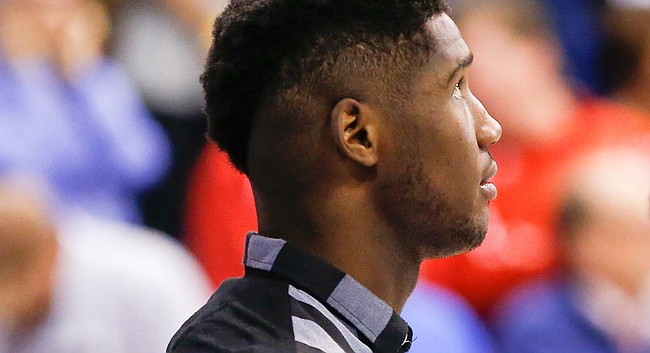 Another recent brush with the law by University of Kansas men’s basketball player Carlton Bragg Jr. came to light Friday, a day after KU coach Bill Self announced Bragg’s indefinite suspension from the team.

Self did not give a specific reason for Bragg's latest suspension, saying only that he had violated team rules. Self said the suspension was not connected to the ongoing investigation of a reported rape at the team's apartment building.

On Sept. 16, KU police received a report of a battery involving a 19-year-old female victim and her boyfriend, according to the police report, requested Friday by the Journal-World. The incident occurred around 3:30 that morning at McCarthy Hall, 1747 Naismith Drive, according to the report.

Police referred the case to the Douglas County District Attorney’s Office for prosecution, the log indicated.

Charges were not filed, said assistant to the district attorney Cheryl Wright-Kunard, who confirmed that the suspect in the case was Bragg.

“We had insufficient evidence to prove it beyond a reasonable doubt,” Wright-Kunard said.

On Dec. 9, Bragg was arrested and charged with misdemeanor battery after a dispute with his girlfriend around 1 a.m. at a KU fraternity house.

On Dec. 14, the charge against Bragg was dismissed and the woman, Saleeha Soofi, was charged instead, also with one count of misdemeanor battery.

Authorities obtained video surveillance of the incident that reportedly showed the pair arguing in a stairwell and the woman slapping the man in the chest numerous times and placing her hands near his neck at least twice, according to a news release at the time from District Attorney Charles Branson. After being hit, the man “forcefully” shoved the woman away from him, causing her to fall backward up some stairs behind her, the district attorney’s news release said.

The alleged victim in the September report is a different woman than Soofi.

This week’s suspension from the basketball team is the second in two months for Bragg, a 6-foot-10 forward who was a McDonald’s All-American and five-star recruit coming out of high school.

Self suspended Bragg when he was charged in December but reinstated him after the battery charge was dropped.

Bragg sat out the Dec. 10 game against the University of Nebraska but played again Dec. 17 against Davidson College.

Thursday night, in a news release, Self said Bragg had been suspended from the team again — indefinitely, and effective immediately.

“Carlton is suspended for a violation of team rules,” Self said. “This violation is not connected to the alleged incident in McCarthy Hall on December 17th.”

According to a KU police report, a 16-year-old girl was reportedly raped between 10 p.m. Dec. 17 and 5 a.m. Dec. 18 in McCarthy Hall, the on-campus apartment building where the basketball team lives along with other upperclass male students.

The rape investigation remains open, and police have released no information about a possible suspect. Police have said the victim, who was not a KU student and not from this area, was visiting residents in the building.

A runaway juvenile also was reported at McCarthy Hall the morning of Dec. 18, but police would not confirm whether the runaway and the reported rape victim are the same person.

All five witnesses named in the police report for the rape are basketball players. The single witness named in the runaway report is Bragg.

Police have not shared why those individuals were interviewed, but have said being a witness in an investigation does not necessarily mean an eyewitness to a crime, but rather someone that may have been in the area or have other pertinent information to the investigation.

While investigating the rape report, police found drug paraphernalia at McCarthy Hall and have cited one person for possession of it, KU Police Chief Chris Keary said Friday.

That charge, a misdemeanor, is pending in Lawrence Municipal Court. Documents were not available Friday.

Keary said there is no indication that the drug paraphernalia is related to the sexual assault allegation. Keary would not share the name or any other information about the suspect in the drug case.

Bragg's ex-girlfriend, Saleeha Soofi, is 19 so I assume she is the alleged "19-year-old female victim " in this September incident. After seeing what happened in December it would not surprise me if she initiated the September incident and Bragg was simply trying to get away from her by closing the door and she called the cops on him because she was pissed off at him.

no it's not the same. - -The article says it was a DIFFERENT woman then Soofi - -the 19yr old in Sept was not Soofi

"All five witnesses named in the police report for the rape are basketball players. The single witness named in the runaway report is Bragg."

What is "the runaway report?"

The one discussed in the article.

McCarthy Hall was supposed to be a palace for these guys and Bragg singlehandedly is turning it into Cabrini Green. Self should just cut ties with him sooner than later. The team needs to have a little respect for their new residence or move back to the Towers.

If only a small bong had been the problem at Cabrini Green. We don't know anything more right now. Self is waiting to learn the entire story too.

this thing is one big mess. the sooner it can be resolved the better. its hard to tell how many incidents are going on here. I can't see how Carlton gets out of this one "if" the drug stuff is also part of the runaway incident, even if he did not do that.

There is a secrecy in all this that will end up hurting KU if they are not careful. For some reason there is a person named in this latest report and no investigative reporter can find out who? Somebody is holding something back. The name is on a filed report. Someone needs to read it and report it.

So now we have a 6 man rotation. This team started off with so much promise now seems to be imploding.

its getting beyond serious Marius. We have to hope that Bragg's deal is not serious and he is back, hopefully against Baylor. If not, Vick will just need to play more minutes in our four guard game and Lightfoot and Colby have to come up to speed fast. At this pace, Tyler may be playing with 10 minutes left in the half (second).

Coleby's contribution tonight might not show up in the box score but I thought his play in relieving Lucas was one of the reasons we won. How did we get down to 8 scholarship players (not counting Udoka and Bragg)? If we go forward without Bragg then we might very well see some of the walk-ons playing in other than cleanup mode.

I agree. Colby was a solid, big body when it counted.

For a team that seems to be imploding, that was one hell of a performance. Should have had more faith in Self to keep this team heading in the right direction. At one point in the first half, I was thinking that this might be a really bad night but senior leadership, a super freshman and strong supporting roles pulled off a really great victory.

It's games like this, where we look to really have our backs to the wall, when the kids and HCBS show us, once again, why we have so much to be thankful for as a fan of the Jayhawks. I'm curious, what do all of you think Self would do with a roster such as the one that Caliparii starts with every year? If you listen to their fans and a large part of the media, Calipari is the greatest coach to ever live. I have to believe he gets less done with the amount of talent available than many other coaches would. My 2nd question is, do you think any of the kids that chose UK over KU, are second guessing their decisions after losing back to back games, especially yesterday's game, that everybody outside of the Jayhawk family, thought was a sure win? Makes me wish that all the kids that had UK and KU on their list had waited to commit. Probably changes nothing, but still an interesting "what-if". :-) RCJH!!!

That's back to back losses to Kansas, not the talking about their loss to Tennessee.

Well, since many of their kids are freshmen, how many of their superstars actually experienced the back-to-back losses? Only sophomores and up would have. I get your point, and agree. Still, Cal does get them, and get them to the League, which is where they really care about. Self, with a few exceptions - Wiggins, EMBID!!!!!, doesn't wind up with All Star alums in the League.

Yeah Tim, you're definitely right about the goal of getting to the NBA. I was thinking about the fact that the freshman this year knew that UK lost to us last year and probably thought that they would be the reason that it wouldn't happen again this year. Love the fact that they can chew on a loss of their own now. Calipari does get them there, but I lIke to think that Self would not only send them on to the League, but would have more NC's to show with all the talent, as well. Just pondering.

There is a team that has made it to the NCAA brackets 18 years in a row that could cause the Hawks some problems. By the way, they were just picked Number One in the AP Poll this week. They are for real ! GONZAGA Bulldogs or the ZAGS Self would do well to schedule a preseason game with them.