Kansas forward Landen Lucas shows his frustration as he and the Jayhawks' bench watch the final minute against West Virginia, Tuesday, Jan. 24, 2017 at WVU Coliseum.

Morgantown, W.Va. — A three-point halftime lead on Tuesday night at WVU Coliseum turned quickly into a nine-point edge for the home team after West Virginia scored on five consecutive layups to start the second half, the perfect snapshot of an area that No. 2 Kansas made way too easy during an 85-69 loss to the 18th-ranked Mountaineers.

“That can’t happen,” senior forward Landen Lucas said of WVU’s layup clinic. “We’ve gotta make it a little bit tougher and make them earn their baskets a little more.... We got exposed on some areas tonight and we’ve gotta fix those.”

The setback was the fourth straight for Kansas in Morgantown and the team’s first loss this season since falling to Indiana in the season opener in Honolulu.

Neither team got out to a particularly strong start, with Kansas showing signs of weakness against that vaunted WVU press and the Mountaineers struggling to get a bucket from everyone not named Esa Ahmad. 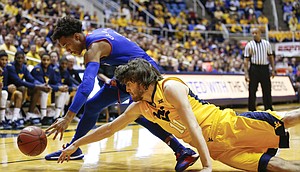 View a gallery of images from Tuesday night's game between the Jayhawks and Mountaineers at WVU Coliseum.

The sophomore from Cleveland made his first three shots — a dunk, an and-one and a deep jumper — and accounted for the Mountaineers’ first eight points en route to a career-high 27 points on 10-of-17 shooting.

“We didn’t play poorly for the first 30 (minutes) or whatever, but, obviously, we closed miserably and they dominated us late,” said KU coach Bill Self before sarcastically adding, “Our free throw defense wasn’t very good and theirs was much better.” 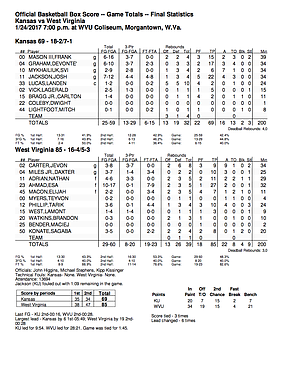 Tuesday’s showdown was a game of runs, with Kansas hitting the Mountaineers (16-4 overall, 5-3 Big 12) with a couple of first-half runs only to watch the home team answer every time. The biggest WVU run might’ve been the 12-4 run they used to close the first half, which set the stage for 47-34 beat down in the second half.

Freshman Josh Jackson led the Jayhawks (18-2, 7-1) with 22 points while Devonte’ Graham (17) and Frank Mason III (15) also reached double figures. Outside of that, Kansas got just 15 points in 93 combined minutes from the six other players who checked into Tuesday’s game.

“I think that their freshness and our fatigue also played a factor down the stretch,” Self said.

Despite allowing the Mountaineers to dictate much of the game on both ends, Kansas used an 11-1 run to take a 59-58 lead with 9:52 to play. However, that lead lasted all of 43 seconds and Kansas never led again.

“We made a couple turnovers, took a couple bad shots,” said Jackson, explaining the collapse. “We just have to understand when we go on a run like that, and we’ve got ’em down after fighting so hard, we just have to make smart plays because the way they play they can easily go on a run at any time.”

West Virginia entered the night leading the NCAA with 23.2 turnovers forced per game but managed to coerce Kansas into just 13. While that number was one the Jayhawks would have taken heading into the game, the total attached to it — 19 points off turnovers — haunted the Jayhawks after the loss.

“I would’ve taken it probably coming in,” Self said. “But the turnovers that we had were bad turnovers.... If you look at the stats, you’re saying, ‘Yeah, that’s not awful,’ but that doesn’t tell the story. They were pretty poor turnovers.”

Still fighting and looking to make one final run to steal a victory, Kansas closed the game by clearing the runway for several more easy West Virginia buckets.

With KU trailing by seven with 4:03 to play, a Jackson deflection sent WVU scrambling. Junior guard Jevon Carter (9 points, 9 assists, 8 rebounds) flipped it to Daxter Miles Jr., who looked to be in trouble in the deep corner in front of the West Virginia bench. Instead of sitting and waiting for the KU double-team to arrive, Miles attacked, slipped right between a flat-footed Jackson and Svi Mykhailiuk and got to the rim for yet another WVU layup.

On the very next possession, after another mindless miscue by the Jayhawks, WVU big man Sagaba Konate caught a soft, trailing pass from Carter and capped a four-on-one WVU break with a monster slam that gave the Mountaineers their largest lead of the night to that point, 74-63 with just over three minutes to play.

A minute-and-a-half later, from the very spot where he was nearly trapped, Miles’ wide-open 3-pointer proved to be the final blow in the Jayhawks’ second loss of the season.

After back-to-back losses, including one in the state of Kansas last weekend, those country roads led the Mountaineers home and there wasn’t a gold-and-blue clad soul in the building not singing at the top of their lungs.

“I don’t think we’ve played exceptionally well here,” Self said. “But I think that West Virginia has a good team. When they’re turned up, which they were tonight, they’re certainly one of the best teams in the country.” 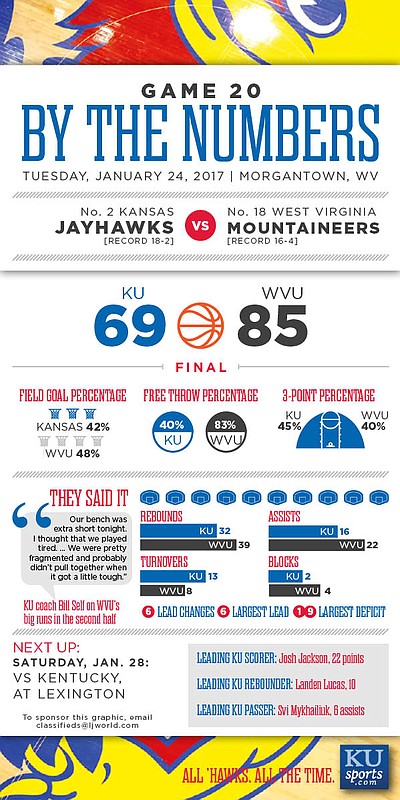 Disappointing that Coleby is not contributing on the inside.

Why didn't he get a chance to play, now that you mention it? He didn't come up here from Ole Miss just to park his ass on the bench.

Get ready Jayhawk fans. Another KU team that should win 30 games and exit the Big Dance on the second weekend, at the latest. I am hopeful they will announce the whole team came down with the flu. Otherwise just a total laydown. JJ can not carry the team on the offensive end of the floor, he needs to be told that. His defense of late is lackluster at best. We got trouble in River City.

Really don't like what I read about the McCarthy Hall incident. We could have much bigger problems than WVU and poor defense.

The article about the McCarthy Hall incident is very troubling on many levels. I will pray for all involved.

I agree. Prayers for all involved. Very sad and very strange that we are just learning about it over a month after it happened. Hopefully justice is swift and severe for the person or persons responsible.

...or of course, better yet, there was no crime committed and the authorities are being thorough instead of fueling a Duke lacrosse rerun....

in which case I would say hopefully justice is swift and severe for the person or persons responsible.

After the strong showing at Hilton, this one surprised me. It's been a hallmark of our teams to finish strong and finish competitively, this one reminds me a bit of that debacle in Stillwater last year.

Bottom line is that four straight losses on someone's home floor represents a trend and it seems that we have a coaching matchup problem with Huggins. Every great athlete, team or coach runs into that one opponent who causes them fits (Ken Norton for Ali, the Giants for the Patriots, etc.) and this may be the case in Morgantown.

Could it be that we were looking past WVU to KY? Seems far-fetched, but maybe so. Too bad, too, with the Villanova loss, the 1-rank was available - not that it matters, but if you are going to be ranked, you might as well be ranked first.

Bill Self has as much trouble winning in Morgantown as he does in Stillwater, or as Larry Brown did in Ames back in the day.

I love Josh but man his defense last night was bad. Baseline beat, pick and roll beat... Seemed like they were driving past him at will.

Also comments are disabled on the McCarthy story... any idea why?

plenty of speculating going on at The Phog forum in case you need your rumor fix...

If NBA scouts were taking a look at Jackson, they'd must have been stunned by his weak defensive effort.

NBA teams won't have him guarding the 4. Scouts left thinking he's the #1 pick.

Interesting game. I think most expected this to be a loss. Things that are still shocking:

1) how bad this team FT's percentage is with 4 guards

3) this team repeatedly gives up career nights to opponents

4) how poor the overall defense is. we are 41st in the KenPom. Last year we were 3 and Bill Selfs only two final fours we were 1 and 3

obviously still in a position to win Big 12 especially because Scott Drew is Baylor's coach and he will inevitably pull a Scott Drew. As per the Final Four--we will mostly like be seeded in KC for the regionals so that will help our chances for the FF.

Lastly, i thought Bragg and Lightfoot played really well in the first half--they brought a lot of energy. Shame to see fouls limit Braggs production but he seems to be putting it together more and more each day.

Just saw that Kentucky lost to Tennessee. Ouch. Saturday's game, KU vs KY will be a wood shed beat down. I think KY will win by 20 or more. Oh well why do I care about the regular season it's all about what you do in March. Six games in March makes everyone forget the regular season. Just ask our National Champions of 1988. Disaster regular season. Went into the tournament with 11 loses. Win 6 games in the NCAA tournament, disaster season turns into Natinal Champions. Or look at 2010 season. Incredible regular season with a 32-2 record. Enter NCAA tournament the #1 overall seed. Awesome team. Loose 2nd round to Northern Iowa. Disaster. All people remember is what you do in March. Hate to say it but it's true.

The basketball world seems to remember the 12 Big12 titles in a row.

agreed. and Big 12 title #13 will be monumental for KU if accomplished.

Many will disagree with me about this, but unless Bill Self wins another national title, 13 straight Big 12 titles IS his biggest accomplishment. Yes, bigger even than the one national championship. 13 straight regular season conference titles has only been done once before (UCLA's John Wooden). Bill Self's legacy is already secured, but if we accomplish #13 this year then he claims title to one of the rarest of rare records and cements himself as one of, if not the one, greatest regular season game college basketball coach of all time.

I doubt it. Thirteen-year-olds usually need a little more instruction.

wow, hilarious. such good timing to throw in a pedo joke when there's a 16 year old rape at McCarthy and all.

It wasn't a "pedo" joke. It was meant to infer that your childish fantasies are likely those of an actual child.... A polite rebuke of your failed humor.

You never know buttercup? The sky could always fall on Kansas.