Tom Keegan: Self hits the perfect notes in halftime message

Kansas head coach Bill Self talks with his players in the huddle during the second half, Tuesday, Jan. 10, 2017 at Lloyd Noble Center in Norman, Okla.

Norman, Okla. — By the time Kansas basketball coach Bill Self sits in front of the microphones to discuss the game his team just played, he’s in board-room mode, smoothly reviewing the key points with a calm demeanor, sprinkling in humor, clearly communicating his message.

That works for him and his program. So does the disposition he manufactures to approach his team during intermission when things aren’t going so well.

In medical emergencies manufactured in Hollywood, the doctor puts the paddles on the patient’s heart and shocks him back to life.

Bill Self’s words are his paddles and on Tuesday night they shocked his team back to life. 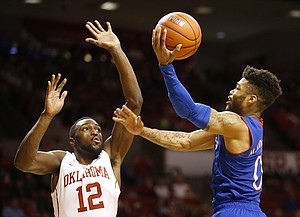 Frank Mason tried to figure out a way to sugar-coat it, but he just didn’t have enough printable material, so he surrendered.

“I can’t tell you the message, but you know, it was, it was, um ... I can’t even say it,” Mason was smiling and slowly shaking his head from side to side. “Coach got onto us and I think we responded pretty well. We just have to start the game off better as a team.”

Freshman Josh Jackson repeatedly has said he came to Kansas to be coached hard. He got what he wanted at halftime Tuesday night.

“He definitely got onto us, but he gets onto us a lot and we all know most of the time he’s right,” Jackson said. “We had to come out with more energy the second half, rebound and play defense a little better, and I think we did that.”

Self doesn’t apply the verbal paddles at halftime as often as some might guess. He picks his spots, knowing that if it were to become a habit, it would lose its, well, shock value.

“That was one of those games where you had to flip the switch at halftime,” Self said. “Usually you don’t do that.”

I’ve always wondered when a coach plays the verbal-shocker card, how much of it is intended to jolt the players back to life and how much is genuine frustration boiling over and rifling off the tongue. So I asked Self.

“I’d say it’s probably 50/50,” Self said. “No matter what, you want to tell them how to attack better at whatever they’re doing wrong. But also, jolt’s a fine term. I don’t know if they were jolted at halftime tonight, but certainly I tried to.”

Oh, they were jolted, all right.

Clearly, Self picked the right spot, volume and colorful language, which was his second-smartest move of the night, ranking behind his decision to put Frank Mason in the lineup. He doesn’t deserve any credit for that one, of course. Mason scored 18 of his game-high 28 points in the first 10:04 of the second half, the most phenomenal outburst of an amazing career.

Mason will have an off night sooner or later because everyone does and when that happens, another first half such as Tuesday's could cost the Jayhawks, winners of 15 in a row.

“We were so passive and soft,” Self said of a first half that put him in a rotten mood. “OU was quicker. They were better than us the first half without question. We didn’t rebound at all, didn’t compete. Second half, we challenged our guys a little bit.”

A “little bit” is a relative term. Whatever the tone, the volume, shade of blue, it was precisely what his players needed to hear. 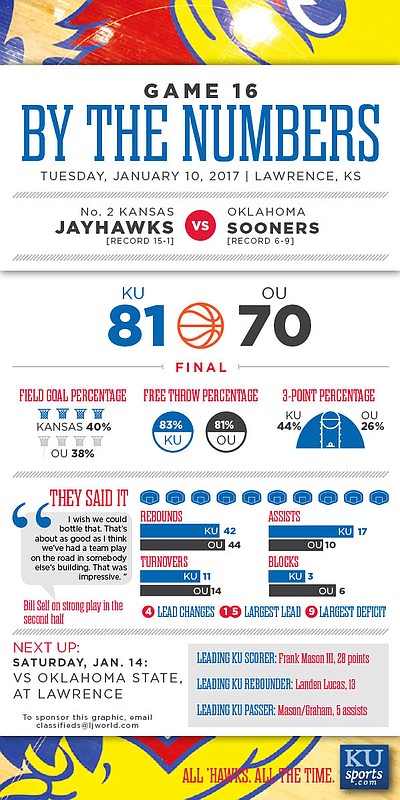 I was at the Florida game in Allen a couple of years ago and afterwards I asked coach Townsend in the autograph line what coach said at halftime to inspire a comeback (Hawks were down 15 or so). He responded with a big smile and ,"...a lot of curse words."

Ooooooooo, Coach is so mean! Fire him and bring in a players' coach who can control his tongue and not degrade his players that way! [sarcasm font]

I gotta say, even though we came back with a flurry in the second half, there are still some very troubling behaviors for this year's team.

I personally don't recall any past year where our opposition has had so many blow-by drives to the basket. While not as profound as the KU game, OU would consistently get by our guards with alarming regularity. If we don't figure out a way to resolve that issue, it will eventually catch up to us.

Coach Self shouldn't need to produce a "motivational tongue lashing" every game to get these guys to focus on it.

It is a testimony to our offensive prowess that we are able to quickly score. But we have all been around the Self legacy too long to realize we cannot depend on that to mask our defensive weaknesses to the depth that they are right now.

I think it is because of this very point that Self said "We don't deserve to be #1 right now." I heartily agree.

But I've said many times, ever since Danny Manning left the staff for Tulsa and Wake Forest, KU's defense hasn't been the way it used to be.

Danny's Demon Deacons are currently in next to last place in the ACC and #187 nationally in defensive efficiency.

I picture Svi in the halftime layup line after a brutal halftime speech by Bill Self asking his teammates what @#!$ing !@#$%^%@# means.

I'm sure that Bill Self can come up with some words and phrases that most of the young men on the team have never heard before actually.

I remember in science class once, back in HS we had a teacher who was a Marine who saw action in Vietnam. He sometimes would get upset with a student and lose his cool. To my recollection he never cursed (we were a Christian school), but there was several times that we'd all be asking each other if they knew what his words and phrases meant. One time he threatened to grab a student by the "stacking swivel" and throw him out of the class or something to that nature. No one knew what he had meant.

Excellent, everyone! Many good points with a little humor blended in.

I agree, Steve. We can't be lulled into a false security about such comebacks. The fact is that Oklahoma is not very good, and they had a lot of trouble finishing plays when our defense was inadequate. That won't happen with the better teams, or even some of the possible "bubble" teams like KSU and Texas Tech.

As for the thrust of the article, there is no getting around the fact that Bill Self is a coaching genius, leader, and mentor. If he isn't inducted into the Hall of Fame in their next vote, then there is no justice.