Kansas guard Josh Jackson (11) comes in for a breakaway dunk during the first half against Texas Tech, Saturday, Jan. 7, 2017 at Allen Fieldhouse.

A pretty game it was not, unless you were looking through the eyes of Kansas coach Bill Self.

“I think our activity level was much better. I do,” said Self following third-ranked KU’s 85-68 victory over Texas Tech at Allen Fieldhouse.

Four days after publicly calling this group the worst defensive team he has coached in 14 seasons at Kansas, Self watched the Jayhawks hold the Red Raiders to 41 percent shooting, swipe nine steals and out-rebound the best rebounding team in the Big 12 Conference, 38-29.

For Self, the effort, though appreciated, was more in line with what he expects from his teams night in and night out.

For the players, many of whom have been around Self and the program for a number of years, the opportunity to please their coach with their play on his favorite end of the floor went down as a little redemption sprinkled with a dash of relief.

“Once you get called out like that, you gotta respond,” said junior guard Devonte’ Graham, who scored a season-high 20 points in the win. “You can’t just back down. It’s a sign of weakness if you don’t (respond). We’re competitors, and nobody likes being called out like that, so we’re just gonna continue to get better.”

That sustained excellence, much more than seeing his team show up on Saturday, was the point of Self’s post-Kansas State message. And where the Jayhawks (14-1 overall, 3-0 Big 12) take it from here figures to be of much more interest to both parties involved.

Asked if watching his players respond to his criticism in a positive way the very next time they hit the floor showed an element of toughness that he was not sure existed, Self pondered the question before offering, “Yeah, maybe. It might. Or it could be a situation (where) you can’t play any worse, defensively. But I thought the guys played with a little bit more competitive spirit on that end.”

Bill Self discusses 85-68 win over Texas Tech, improvements on defense

Backed by that defensive intensity, Kansas jumped out to a 17-7 lead early in the game thanks in large part to a Texas Tech scoring drought that spanned 4:15.

However, after trailing 24-13 midway through the first half, the Red Raiders began making shots — many of them right at the rim — and crawled out of the early hole before getting buried.

In the final minute of the half, Tech (12-3 overall, 1-2 Big 12) had a chance to trim KU’s lead to one or even tie the game, but a Josh Jackson steal and flush was followed by a timely steal by Frank Mason that wound up leading to five Kansas points — and ultimately a 10-point halftime lead — just before the break. 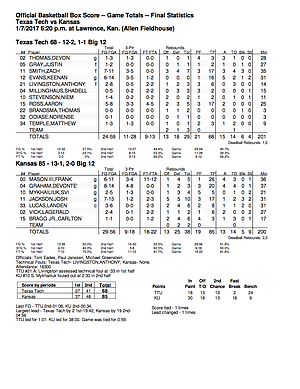 The first three came on four free throw attempts after Mason was fouled on the drive. He got two extra cracks at the line following a technical foul whistled against Texas Tech big man Anthony Livingston, who exchanged words with KU forward Landen Lucas following the foul.

“That’s our point guard and he got fouled pretty hard so I just went up, very nicely, and asked (Livingston) not to foul him that hard,” Lucas explained after the game. “He felt like I was attacking him or something and wanted to throw himself against the back of the hoop and then realized that that didn’t do anything so he came up, pushed me and then go the tech. I was really just making sure that he knew not to foul Frank that hard.... It reminded me of someone who used to play at Oklahoma State.”

Texas Tech coach Chris Beard, who lamented his team’s inability to take anything away from the Jayhawks’ offense, called the end of the half meltdown an unraveling and said that was a turning point in the game. Lucas agreed.

“It was (big),” Lucas said. “We always like to finish the half strong.”

The Red Raiders drained three straight shots to open the second half and quickly cut the Kansas lead to five points. But once they started missing, they found out KU’s defense actually never went anywhere. And that defense was a big reason for a few of the Tech misses, never more obvious than Jackson’s one-handed block of a point-blank, dunk attempt by Red Raider Shadell Millinghaus, who cocked the ball back in his hand and prepared to hurt the rim only to have Jackson’s mitt change the flight pattern. That led directly to an alley-oop from Mason to Lagerald Vick (six points, two steals, 27 minutes) that pushed KU’s lead back to 10.

Texas Tech’s best shot at putting real pressure on Kansas came with just under 10 minutes to play, when Aaron Ross stepped to the free throw line, looking to pull the Red Raiders within four.

But Ross missed the front end of the one-and-one and on the very next possession, Josh Jackson drilled a three-pointer to put the Jayhawks up nine.

Two possessions later, Jackson scored in close despite getting his first two shots in the lane blocked. That put Kansas up 60-52 and helped maintain the cushion that carried the Jayhawks to victory.

Kansas delivered the knockout blow with a 16-2 run late in the second half that included five consecutive made field goals and a pair of made free throws on both sides of that stretch, turning a 60-55 Kansas lead into a 76-57 lead with five minutes to play.

“A lot of teams come into this building and play with them for 32 minutes,” Beard said. “But they run you off the floor for eight minutes and you get on the bus and get a sandwich.”

Said Self: “There’s no Earth-shattering deal on why we actually guarded a little bit better tonight. Guys were more into it, they played harder and they played with more energy. It’s not that complicated.”

Baseline View: Jayhawks turn it up late to beat Red Raiders by KUsports.com

"Yeah, maybe. It might. Or it could be a situation (where) you can’t play any worse, defensively."

You know what that is, right? It's Self not getting too excited over one good defensive effort and trying to keep his guys from thinking they've satisfied him.

Evidently, you can turn your defense around in a couple of days. I would have put money on better D today.

baby steps. hey, they are going to be up and down, in a sense, from night to night. It was a good game.

"It reminded me of someone who used to play at Oklahoma State.”

Maybe the best Lucas quote ever! :)

Yeah, that one made me laugh. You think he was talking about Marcus Smart or who?

Absolutely, the flop reminded him of Smart.

The question is why the defensive effort was so poor vs. KSU. With the veterans that KU has, they should never have that lack of intensity.

Coach, what's the second chance pts given up this time? How about them offensive rebounds by TT? I wouldn't be too happy about the D tonight. Sure there seems to be an extra intensity, but there's still a lot of real D work to be done (not only emphasized) if the team really want to win it all.

We surely outrebounded TTU by 10. I was talking about how we still gave up 13. Intensity was there. On 3s, you nailed it, perfectly, Jay. 11 of which they made those 28 3s. I left that fact thinking it's too obvious, our perimeter D is too soft. We were way too late to get in the face of the shooter, or we gave them enough space to launch those 3s. If you're happy with the team's D effort vs TTU, I'm happy for you!

TT had a terrible percentage on threes coming into the game, so I'm guessing that one of the reasons they had a lot of space to shoot them was that KU intentionally focused on stopping their twos, which had been excellent.

The biggest difference were the active hands. Balls were being deflected all over the place. If the guards can keep that up, the Jayhawks will be in good shape.

I still would prefer to see fewer minutes being put in by Mason and Graham.

In a seven man rotation, no one is going to get much of a break.

The only way I see these guys getting more rest is if Coach goes back to 2/3 instead of 1/4, and Lightfoot and Coleby get more time.

I know you "play 'em one at a time" but it would really help us put the conference in a headlock if we could win the next 4, before facing the gauntlet of @WVU, @Kentucky, and Baylor - in consecutive order. 5 of 7 would be pretty good.

True, except that UK won't have any effect our conference standing ...

That won't make it any less taxing physically/mentally, or important to the players though.