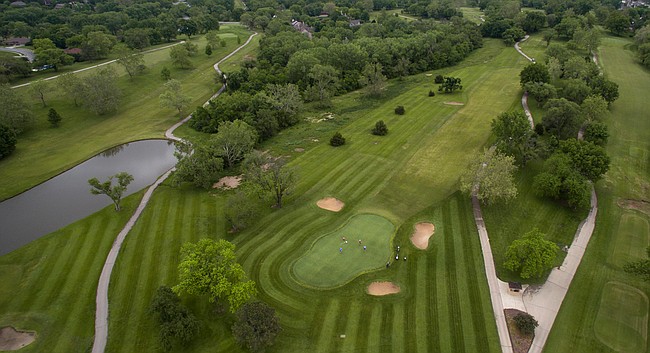 In this file photo from May 9, 2016, golfers gather at the ninth hole on the public side of Alvamar Golf Course.

In a unique licensing and branding allowance by the University of Kansas, Lawrence’s Alvamar Country Club is now called the Jayhawk Club, with a Jayhawk-emblazoned logo to match.

KU on Monday announced the licensing agreement between the university and club ownership, an LLC headed by Lawrence developer Thomas Fritzel and his family, who also developed Rock Chalk Park.

Alvamar, now the Jayhawk Club, has been and remains the home course of the KU men’s and women’s golf programs.

KU licenses lots of apparel and products but it’s rare, possibly unprecedented, for the university to license use of the Jayhawk name and mascot to a privately owned business.

University officials said the agreement is unique and that it reflects a unique opportunity for KU. 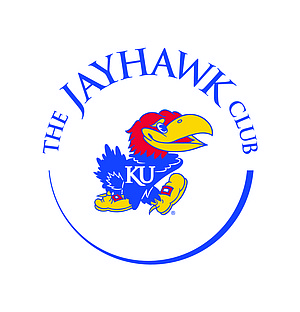 Contributed image from the Jayhawk Club

Logo for the Jayhawk Club

“Alvamar Country Club has been a great home for the University of Kansas men’s and women’s golf programs, and there has been a terrific partnership between the club and the university during that time,” Tim Caboni, KU vice chancellor for public affairs, said in a statement. “This new license agreement is an extension of that partnership that will benefit The Jayhawk Club, the university, our student-athletes and the entire region. We are excited to have our university’s name and our world-famous Jayhawk affiliated with the facility.”

The golf facility has a new logo and branding that features the club name with an image of the Jayhawk. According to KU, the new club will also feature officially licensed merchandise reflecting the name change.

KU’s 20-year agreement with Eagle 1968 LLC allows the club to use KU’s registered marks and names for an annual fee of $120,000 for the first 10 years, according to KU. For the final 10 years of the agreement, that annual amount is adjusted for inflation. Fritzel is a local businessman who led a partnership with KU at the Rock Chalk Park sports complex in northwest Lawrence. He also is an owner of The Oread, a Lawrence hotel that is at the center of a tax dispute between Fritzel and Lawrence City Hall.

In a statement shared by KU, Fritzel said the club’s partnership with the university would bring new energy to an historic community landmark and its founder.

“Bob Billings was such a positive and energetic force,” Fritzel said. “There is much to learn from his approach — in business and in life. Every day is a gift, and we should live it fully. It is an honor and a privilege to continue what he started.”

Fritzel’s company took over ownership of the club more than a year ago. Work continues on a major redevelopment effort that includes private residences as well as renovations to the clubhouse and golf course.

The club previously had an 18-hole public course and an 18-hole private course, but it’s no longer open to the public. 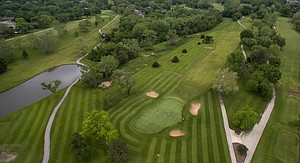 In this file photo from May 9, 2016, golfers gather at the ninth hole on the public side of Alvamar Golf Course.

Wes Lynch, general manager of Jayhawk Club, said the club went all private as of December 2016.

The public clubhouse has been torn down, and major renovations to the private clubhouse are ongoing, Lynch said. He said the clubhouse is expected to be complete in April or May. A new swimming pool also is under construction and anticipated to open this summer, he said.

As for the golf course, it’s going from 36 holes to 27, Lynch said. Portions of the course are open now, he said. The whole course should reopen in late spring or early summer after resodding and reseeding.

As for the private residences, Lynch said the first phase is hoped to be completed and available by late summer. The building will feature one-, two- and three-bedroom residences. The club also has broken ground on a wellness and fitness center.

Lynch said the club plans to break ground soon on a new building for the KU golf teams, which is hoped to open in time to use next golf season.

Lynch said representing “Jayhawk nation” should be a boon to business for the club and development.

“It kind of gives us a step up,” Lynch said. “I think people will be excited that they’re a part of that.”

Pricing just went up for membership at Alvamar (The Jayhawk Club)!

By taking the course public, selling out the name, shutting down 9 holes and removing it from availability to the city of Lawrence..

Riiiiight... Pretty sure that's not at all what Billings intended..

I remember when Alvamar was built in the 70's, it was stated back then it was intended to be an inexpensive place for KU students to golf. Even back then it was pricey for a student on a budget. So John you hit the nail on the head!

So, Avamar public is no more? What a shame. I enjoyed playing there in my KU years.

This story is confusing. I don't understand if I come to visit will I be able to play golf there? Would I be able to eat at the clubhouse or buy some of the gear and apparel? It says the club is going all private. I don't have an issue if that is the way it goes, but just curious if the next time I visit Lawrence, will I be able to check it all out (buy some stuff) and maybe get in a round or two.

It's private DG, so unless your a member, the answer is no.