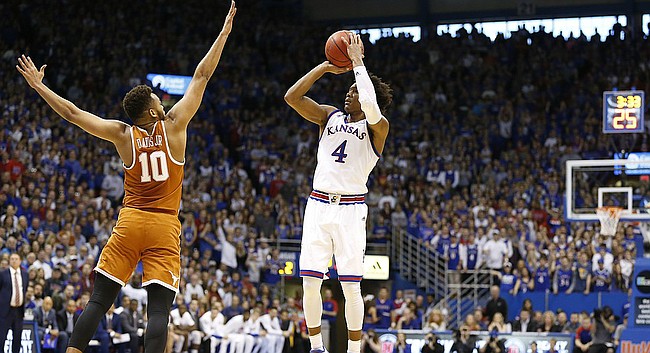 Kansas guard Devonte' Graham (4) lines up a three over Texas guard Eric Davis Jr. (10) during the first half, Saturday, Jan. 21, 2017 at Allen Fieldhouse.

For months, from summer conditioning and boot camp to the start of practice and the grind of the season, the Kansas men’s basketball team has operated with a primary goal — win the Big 12 Conference.

With that box checked and the Jayhawks preparing to move on to the next goals on their list — Big 12 tournament title, Final Four, national championship, etc. — the final three games of the Big 12 regular season have the potential for trouble.

The Jayhawks could lose all three games and still be Big 12 champs and in position to make a run in the postseason. While that outcome is neither likely nor desired, Kansas will look to emphasize a couple of key carrots to get up for the rest of the regular season, including winning the Big 12 outright — a victory against Texas will clinch that — and playing for seeding.

The Jayhawks are positioned well to be a No. 1 seed and have their road to the Final Four go through Kansas City, Mo. No one on this team wants to see that disappear.

Wednesday night ended with a wild celebration and a lot of hugs and smiles from the Jayhawks, who clinched at least a share of their 13th consecutive Big 12 title.

With that accomplishment now in the bag, KU coach Bill Self is hoping his team will be able to play with more freedom and even have a little more fun.

“Whether you see it or not, these guys, during conference play, they operate under pressure and they get most everybody’s best shot,” Self said. “... I think in the next two weeks we can focus in on trying to just play our best basketball that we’ve played all year long because the pressure’s off a little bit.”

An important part of reaching that goal in the days leading up to the postseason will be to look at the areas in which this team has struggled and times and fine-tune those for the stretch run.

“I think right now,” Self began. “What we have to do is stay fresh, minds and bodies as much as possible, and work on some things that we aren’t doing as well as we should and play with a freer mind than we have.”

During Thursday morning’s Big 12 coaches teleconference Self said he expected KU’s upcoming game with Texas to come down to the final few possessions because, “it seems like every game does in our league.”

The Jayhawks have been fantastic in late-game situations during recent weeks, surviving road tests at Texas Tech and Baylor and a close-call at home against West Virginia by executing nearly flawlessly in the final few minutes of each game.

In order to get out of Austin with a victory, the Jayhawks are going to have to start strong and play to the end and Self and his staff have emphasized that in the past couple of days.

“Texas was good against us the first time,” he said. “Playing on the road is always a challenge and we respect (UT coach) Shaka (Smart) and his staff and their players. They have good players, they’re just young. We know we’re gonna have to play good to win.”

A lot of times, the key match-up for any particular game is an examination of two players and what they can do against one another.

In this case, the key match-up for Kansas-Texas comes down to what the Jayhawks can prevent Texas freshman Jarrett Allen from doing. A monster in the paint, who continues to be more confident by the day, Allen hit the Jayhawks for 22 points and 19 rebounds in the first meeting in Lawrence and, obviously, will be a focal point for the Kansas defense in the rematch.

“Jarrett Allen played unbelievable and we’ve gotta do a better job on him,” said KU coach Bill Self earlier this week of the UT freshman who finished 9-of-14 from the floor and played 34 minutes in the loss to Kansas.

Although the 6-foot-11, 235-pound freshman who chose Texas over Kansas put up monster numbers against the Jayhawks back in January, he’s not the type of player who solely sits in the post and waits for the ball to be thrown to him. Allen got a lot of his points and rebounds off of offensive put-backs (7 offensive rebounds) and also got the free throw line seven times.

Limiting both of those numbers will be key for Kansas in this one.

All is well in Jayhawkland, where the Kansas men’s basketball team is again king of the Big 12 Conference and the third-ranked Jayhawks are roaring toward March as a likely No. 1 seed and serious threat to contend for a national title.

But just because it’s business as usual for the boys in Lawrence does not mean the rest of the conference is going to let up now.

Those same teams that have been gunning for Kansas all season still have as many as six shots to knock off the Jayhawks, therein proving something to themselves and the college basketball world.

With a veteran group that appears to be well prepared for the challenges that lie ahead, the Jayhawks figure to continue to bring razor-sharp focus into game days and will look for time to rest on their off days.

KU’s limited depth and short rotation has been a concern all season, but Self said recently that he did not see any reason for this team to pull back now.

It would be a treat to get any kind of contribution from Carlton Bragg. Otherwise, Cleare and Allen will post big numbers.

I guess the breakdown and the pulse section are going to ignore the obvious in this story. What, if any, carryover to the floor will come from all of the continued off court issues? I would think the "Boys from Lawrence" will be happy to be playing out of state today. But, these issues have been there for awhile and others, much more serious, loom in the background. Maybe one of Coach's greatest jobs this year from a guy everyone seems outside of the KU Nation to take for granted. I am betting the media will once again turn elsewhere for Big XII Coach of the Year to the guys down in Stillwater, or Lubbock. He has masterfully had them continue to remain focused on their basketball in the context of enormous pressure to win the conference. Self finally acknowledges this and is now starting to send his "play with a free mind" messages to them. I think the "outright" still looms and this little issue needs to be retired today. This is a good day to do it against a Texas team that can be real trouble on their best days. I am sure today will be one of those best days.

Underwood has down a marvelous job and OSU might be the hottest team in the Big 12. They are for real and might make some noise in the tournaments. And yes Underwood deserves votes for coach of the year. But this year Self has done his best coaching job, with less overall talent and depth in years past where he was again overlooked because he was expected to win the conference. When Bragg became a no show and Azubuike went down, as well as the surprising rise of Baylor to the national level, pundits across the country began to question if KU had the firepower to win their 13th. Self's demonstrated flexibility for a person who is more stubborn than most, showed why he is the best. Mason's nation rise to a leading candidate for national POY further emphasises Self and his staff at developing talent. The versatile and unselfish play of a one and done lottery type talent further supports how Self leads. With all of the self-inflicted distractions, key injury, and slower than expected development of bench players, all point to who did the best job in the Big 12 in 2016-2017.