Entering Tuesday, Iowa State was the only team in the Big 12 that Kansas junior Jessica Washington failed to score double figures against. She only scored four points in the teams’ first meeting, and she was determined to have a better showing at Allen Fieldhouse.

“I know she was really disappointed with the way she played in Ames,” coach Brandon Schneider said. “It was nice to see her really respond.”

Washington scored a career-high 36 points to go along with four assists and three rebounds, but it wasn’t enough in a 90-75 loss. 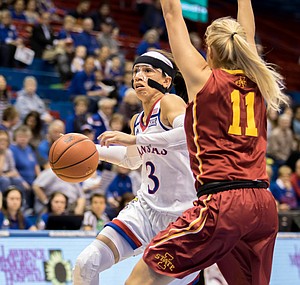 Her 36-point output is the most by a Kansas player since Carolyn Davis scored 36 against Nebraska in 2011. It was also the 10th time she’s scored 20 or more points this season.

“They’re a smart, and very skilled basketball team,” Schneider said of the Cyclones after KU’s third straight loss. “Tonight they capitalized on those (defensive errors), and made shots at a really high clip.”

The Cyclones (16-11, 7-9) only turned the ball over 10 times, which is nine fewer than the 19 per game the Jayhawks have forced this season. Schneider cited Iowa State junior guard Jadda Buckley, who had 14 points and six assists, as the reason Kansas couldn’t force turnovers at its typical clip.

“If you would have said before the game that they would have got 15 (threes) off I would have taken that,” Schneider said. “Typically they might make six or seven. Tonight they obviously shot really, really well.”

Defense wasn’t the only issue for the Jayhawks (8-19, 2-14) on Tuesday. Outside of Washington, nobody else scored more than eight points. Sophomores McKenzie Calvert and Kylee Kopatich, their second- and third-leading scorers, combined for just 12 points.

Although the Jayhawks never held a lead, Washington wasted no time warming up despite wearing a face-mask for the second straight game. She made her first four shots and scored 11 points in the first quarter to keep them within 22-16.

Washington, who shot 12-of-19, said the mask doesn’t affect her in any way, and she will have to wear it the rest of the season due to a nose injury.

“It’s just something you have to adapt to,” Washington said. “It wasn’t hard, it doesn’t bother me. Our trainers did a really good job fitting it to my face.”

After a back-and-forth second quarter, Washington scored the first five points of the second half to pull the Jayhawks within 38-34. But that was as close as they would get.

Iowa State outscored Kansas, 29-19, in the last six minutes of the third quarter, and it even opened up a 23-point lead in the fourth before ultimately cruising to a win.

Kansas will play host to Kansas State at 2 p.m. Saturday.