No longer a part of the Kansas football team’s plans at quarterback, former starter Montell Cozart announced Tuesday afternoon his intentions to transfer.

Cozart tweeted out his decision, contained within a detailed note in which he thanked KU staff members and called his time at the university a “blessing.”

A 6-foot-2 QB from Kansas City, Mo., who starred in high school at Bishop Miege, Cozart played in 27 games and started 18 for the Jayhawks during portions of four seasons (he was granted a medical redshirt following an abbreviated 2015 campaign).

A team captain, Cozart opened 2016 as KU’s starter, and rotated in and out of the lineup much of the year before watching the final three games from the sidelines.

Appearing in seven games of what proved to be his final season as a Jayhawk, Cozart completed 112 of 191 passes for a team-high 1,075 yards, to go with seven touchdowns and nine interceptions. 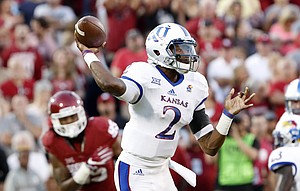 Kansas quarterback Montell Cozart (2) passes against Oklahoma during the first half of an NCAA college football game in Norman, Okla., Saturday, Oct.29, 2016.

“The past four years of my life at the University of Kansas has truly been a blessing,” Cozart wrote in a message he tweeted out. “On and off the field it has molded me into the man that I have become.”

The QB thanked KU head coach David Beaty, who doubled as Cozart's quarterback coach and offensive coordinator this past fall, as well as the former staff that recruited him to Lawrence, in his note.

“(Beaty) exemplifies the true meaning of leadership,” Cozart wrote. “The passion and the drive that he comes to work with is like no other. I believe in his plan that he and his staff is putting together at the University of Kansas.”

The charismatic QB first arrived at Kansas in 2013, ahead of Charlie Weis’ second season as head coach. In his time with the program, Cozart experienced eight Kansas wins and 40 losses. 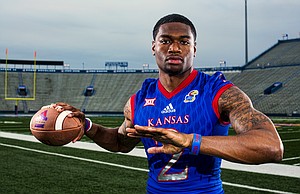 “Jayhawks nation, I also want to thank you guys,” Cozart added, “for being there and supporting us through the rough times but staying true and keeping the faith just as much as we did. Good times are on the way, trust the process.”

A highly-respected player on and off the field within the KU program, Cozart included in his lengthy message a thank-you to his teammates.

“I love you boys,” the four-year Jayhawk wrote. “I have met some of my best friends here at Kansas and you are my brothers — I mean that with all my heart.”

Cozart characterized his decision to transfer as “tough” and said it came with “prayer, sleepless nights and meaningful talks” with family members.

He concluded the note by sharing his hopes that KU fans will continue to think of him as a Jayhawk.

Beaty followed up Cozart's announcement with a Twitter response: "Telly you're the epitome of what a student-athlete should be. I'm incredibly proud of you (and) your uplifting and humble spirit."

Majoring in sports management, with a minor in business, Cozart is on schedule to graduate from Kansas at the end of the spring semester. Cozart currently is interning with the athletics department’s communications office and the student recreation center. As a graduate transfer at another to-be-determined university, Cozart would be eligible to play immediately this coming fall.

Cozart became the third Kansas QB to leave the program this offseason, joining another former starter from the 2016 season, Ryan Willis, and reserve Deondre Ford.

Kansas quarterback Carter Stanley finished this past season as the Jayhawks’ starter, and even helped the team knock off Texas during his three-game stretch as the top QB.

Beaty and KU also added another quarterback to the roster for 2017. Former Washington State QB Peyton Bender is expected to compete with Stanley for the starting spot, with spring football practices beginning in March.

The quarterback room had to look crowded for Cozart, Ford and Willis, with Stanley and Bender at the top of the depth chart, and Tyriek Starks in the mix, as well.

best of luck to Montell. Such a fine young man and no doubt he will do great things in life.

That's all good for everyone.

Handled with class, Montell, just like everything you've done. Thanks for all that you've given to KU, and best of luck in your future endeavors. You are a true Jayhawk, always.

Best of luck to Montell. Nice kid but simply didn't have it as a QB and a leader. This is good for him... and great news for Kansas football.

Didn't have it as a leader? He was elected team captain. Nuff said.

Election results are a barometer of merit at the McCabe house this week?

He seems like a good guy and a good teammate, but (and this might sound a little harsh) I'm not going to miss him.

Your right Chris, you should have stopped after teammate.

No player has frustrated me like Montell has over the past few years. He got way too many chances.

Good kids deserve more chances than the self-centered ones.

He seems like a good kid and I wish Cozart all the best, but I'm starting to think we've got some good quarterbacks in the stable now. Might have to go to a few more games this year...

Beaty has done some good things of late. His handling of Montell Cozart early on was not one of them. He should have been moved to a position where he could have stood out. He really has some gifts. He's freakish athletically. Beaty stubbornly held on to the notion that Cozarts only position was at QB, and because of that decision he wont have him at all. Kudos to Montell, though, for handling the criticism and his exit from KU with nothing but class.

Montell may have had some thoughts of his own on this. Do you recall him pleading to play another position and being refused by Beaty?

Beaty wasn't stubborn in not switching Cozart. Ryan Willis broke his wrist and Cozart was the inly QB with experience behind him. Injuries prevented the switch, not Beaty being stubborn

Beaty was being stubborn. Experience didnt help Cozart. Since that's the case, any quarterback on the roster with inexperience--including all of those without injuries--were prime candidates ahead of Cozart. Stanley, for example, had a year in the system under his belt already. It is not at all uncommon for sophomores to start, and he should have especially given Cozart's record of ineptitude. That Stanley saw action early in the season speaks volumes. Only problem is, if Stanley (or anyone else for that matter) had been given MORE time early in the season, which would have been entirely justified given Cozarts proven inabilities--they would have gained a confidence level and the experience you say they lacked! Experience against weaker competition, mind you. No one who saw the misuse of the utilization of quarterbacks by Beaty early in the season thinks he handled it well. Maybe you could tell us if you do?

By the way, Reesing hadnt started a single game in his freshman year. Was much in the same position Stanley was. That worked out well for Kansas dont you think?

Beaty was being stubborn.

...or Cozart didn't really want to play another position.

Good thing the players get to veto the coaches decisions on whether they get moved or not. Oh wait. They dont.

Maybe Cozart should have gotten to decide how much he played? Heck, maybe he should have been added to the coaching staff and helped to decide what position other players got to play too?

In fact, it was reported on this site that Montell had offered to move positions and Beaty declined.

Beaty botched the QB situation as badly as it could be botched. Not even worth arguing.

Montell is first-class all the way. Great, great young man.

Except for the broken wrist and all the interceptions.

Beaty patched the QB situation as well as could have been hoped for without having any true D1 QB's - Carter and Tyriek still being too young to be considered true D1 QB's.

Good luck Montell, and thank you for 4 years of hard work and dedication. I hope you find great success wherever you land, and no matter what, you will indeed always be a Jayhawk. Rock Chalk!

Everything I've heard is that he's a great kid and a leader. If he goes somewhere with a good O-line or switches to WR, he could flourish. Best of luck Montell.

Wouldn't it be something if Cozart transferred to KSU and led them to the Big 12 Championship!

Someone ought to wash your mouth out with soap! Or scour the keyboard that you typed that vile sentence on!

Wow. Did you really mean to write that?

What a classy guy. I wish him success where ever he goes

This is good news. KU is turning the page and moving into a brighter future.

You're a class act Montell. Once a Jayhawk, always a Jayhawk!

This is crap! He should (probably/possibly) still be starting for our team. Albeit not at quarterback but as a back. He can run, catch, has a positive outlook, and has leadership skills. Although he is certainly not the greatest athlete ever, IMO its a waste this guy is going to get away. I'm not happy we've lost a couple of the better recruits either. Call me crazy, but had he not been able to start/play as a back, and knowing our secondary is depleted, I would have tested his ability to hang as a cover corner or maybe a KO returner. I always love the crazy idea of having both a QB and a RB who can throw, on the field at the same time. That is extremely hard to defend with the right athletes and system.

He actually has the freedom to go somewhere that wants him as a QB. If he wanted to be a RB, WR, DB or whatever, he would still be at KU.

I understand what he wants now. I just think a lil forward thinking (weeks ago) would have given ample time to really explain...... You didn't make it a KU as a QB, prolly not gonna go to a higher league as a QB but........ being a starter here in a "athlete" type role may provide a better opportunity to get eyes on you to build your reputation as someone who could play a role in the NFL as an athlete. Or whatever other league he may want to join. I don't think being a D2 anything gives him that attention unless your just over the top good. I am sure I could be wrong too. I just would have made a big effort to keep him. Not that coach didnt. I have no idea. I would have loved to see a pitch to the slot with a long un suspecting pass downfield once the D bites on the run. I wanted to see that with Cummings as well. We didn't use either of them that effectively. IMO

Danny....what makes you think that all those conversations haven't been had a dozen times? If Cozart is truly interested in playing another position then he would be staying. He's very obviously not.

I think he would a great great Division 2 or 3 quarterback. Best of Luck