On a night when so many wild and crazy things happened down the stretch, it could be easy to forget one player’s contribution midway during the first half.

But neither Kansas coach Bill Self nor senior Frank Mason III was about to forget what sophomore guard Lagerald Vick contributed to KU’s improbable, 84-80, overtime victory at Allen Fieldhouse on Monday night. 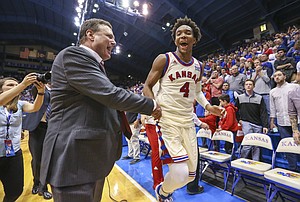 Vick, who played just 18 minutes but would have played near 30 if not for foul trouble, sparked the Jayhawks’ first-half comeback.

First, Vick drained a couple of 3-pointers from nearly the exact same spot on the Allen Fieldhouse floor. Second, he showed some poise and maturity by resisting the urge to keep jacking shots and instead moved the ball on a couple of occasions, which ultimately led to him finding Mason in the corner for another three that pulled the Jayhawks within three, 21-18, with 8:24 to play in the first half.

“Lagerald came off the bench first half and he was great,” Mason said. “Energy, he made some good plays and we need that from him moving forward.”

Vick finished with 14 points on 4-of-8 shooting, including 2-of-4 from downtown and 4-of-5 from the free throw line. He also added two rebounds, two assists and a steal. 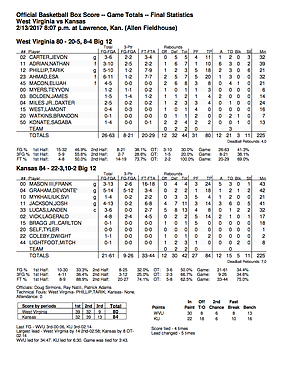 After an illness over the weekend at Texas Tech negatively impacted his performance, Mason played 43 minutes and finished with a game-high 24 points, including making 16-of-18 shots from the free-throw line to help Kansas grab the victory.

Asked after the game how he was feeling, Mason, still noticeably congested, said he was on the mend.

“I feel a lot better,” he said. “(At) Texas Tech, it was just my body, I had the chills, headache, my eyes were really bad and burning and stuff like that. But I’ve been getting meds and fluids and food and stuff in me like that. Today I felt a lot better. No chills. I think it’s just my nose is stuff up and a little cough. I’m feeling a lot better.”

Late in the first half, the KU public address announcer revealed during a timeout that KU fans in Allen Fieldhouse on Monday night were the new owners of the Guinness World Record as the loudest indoor crowd in the world.

KU’s record of 130.4 decibels topped the mark previously held by Kentucky’s Rupp Arena (126.4), which was set last month during KU’s trip to Kentucky. According to Philip Robertson, an official Guinness World Records adjudicator, shortly after that game KU reached out to the folks at Guinness about coming to Lawrence.

Kansas basketball coach Bill Self talks about his team's 84-80, overtime victory over West Virginia. The Jayhawks trailed by 14 points with under three minutes to play.

Robertson said before the game that Guinness receives between 40,000-70,000 requests for records each year and added that the measurements for records like these tend to be fair and competitive regardless of the size of the venue because the equipment used in the noise reading only registers the noise from the first 50-60 rows.

The official decibel meter for Monday’s record was set up in the Northwest tunnel of Allen Fieldhouse where the KU players run out before game time.

Asked after the game for her thoughts on the show she witnessed, Hartung said simply, “Wow!”

KU now leads the all-time series with West Virginia 7-4, including a 5-0 mark in Allen Fieldhouse.... KU is now 12-1 in Allen Fieldhouse this season.... KU has now won 11 league games or more for 22 consecutive seasons, dating back to the 1994-95 season.... The Jayhawks now own a two-game lead over Baylor in the Big 12 race, with five games to play. Kansas will play at Baylor at noon on Saturday. 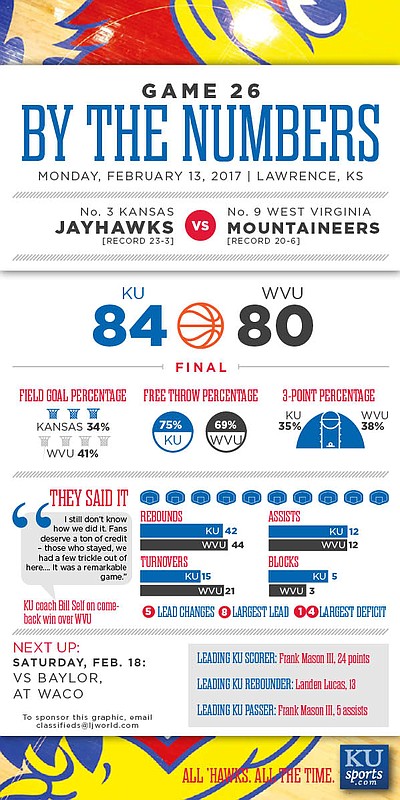 Before Vick came in and got us some points, I loved the camera shot of Coach yelling "Soft!" at Lucas after he had a couple of balls stripped away from him.

Congratulations to Lagerald. What a great way to pump up your team and help them win the game.

I haven't been a big fan of Vick's performance in several games this year and the off the court stuff has been an unwelcome distraction. But, I'm glad he had a positive impact on last night's game when we needed someone to step up. Well done young man!

"Asked after the game for her thoughts on the show she witnessed, Hartung said simply, 'Wow!'"

Coincidentally, that's generally my reaction when I see Kaylee Hartung.