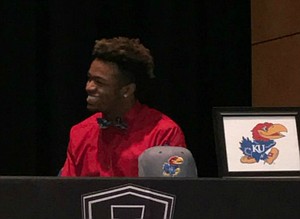 i wanna thank my family , supporters , and the man above for sticking with me through everything.thanks! Tjordan signing out 🔵🔴 #rockchalk pic.twitter.com/Xuu1A1t7BR

Thanks for at least mentioning the scholarship non-clarification 😁👊

Don't forget about CSU/Wichita transfer Deron Thompson who will be eligible this year.