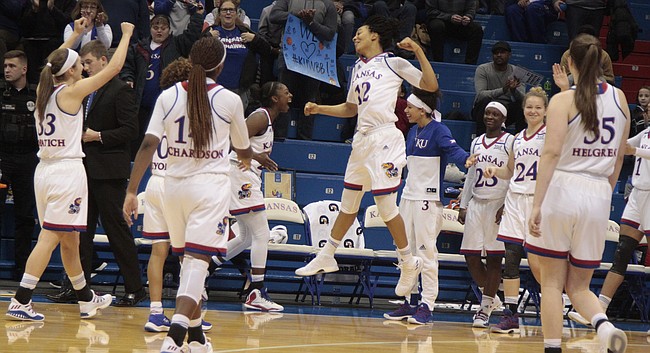 The Kansas women's basketball team celebrates its 86-77 win over TCU in its Big 12 home opener on Sunday at Allen Fieldhouse.

As the shot clock dwindled down in the final minute of the fourth quarter, Kansas junior Kylee Kopatich was unable to shake free of a defender for an open shot.

Rather than heave up a contested jumper, Kopatich dished it out to junior Christalah Lyons for a buzzer-beating 3-pointer that capped the Jayhawks' 86-77 win over TCU in their Big 12 home opener on Sunday at Allen Fieldhouse.

The Olathe South product was responsible for nine of KU's 15 assists, which led to a balanced offensive effort for the home team. Lyons and Kopatich scored 18 and 17 points, respectively, and Brianna Osorio (15) and Austin Richardson (10) rounded out the four Jayhawks who scored in double figures.

Kopatich has proven the ability to score consistently in her junior campaign by pouring in 15.5 points per game, but her unselfishness was something that really stuck out to Kansas coach Brandon Schneider.

"Kylee had nine assists? OK," Schneider said as he answered his own question. "She played really well. I think Kylee has had some games this year where she's so competitive and she's a perfectionist and she can get in a mode where she tries a little bit too hard.

Along with sharing the ball, the Jayhawks took care of it, too. The Jayhawks (10-3 overall, 1-1 in the Big 12) only committed two turnovers in the first half and had 11 for the game, which Schneider said was important against a normally-stingy TCU squad.

"I think only having 11 turnovers was really, really key. Our goal was 12 or less," Schneider said. "They are an elite team in transition. For the most part, we didn't make those turnovers-for-touchdowns type of plays that a team like that can thrive off of."

While the Horned Frogs (10-4, 0-2) weren't able to get going in transition, they were able to hang around in the fourth quarter thanks in large part to junior forward Amy Okonwo. The 6-foot-2 post scored 10 of her game-high 22 points in the final 10 minutes, and added 10 rebounds to record a double-double. Okonko went on a personal 8-1 run to cut the deficit to 75-69 with 5:24 to play, but that was as close as TCU would get.

Schneider was discouraged that his team got outrebounded by a 47-to-30 margin, which is one area that he said the Jayhawks will have to clean up going into Wednesday's road matchup against Texas Tech. The Jayhawks' leading rebounder was their shortest player, as Lyons grabbed six boards. The Trinity Valley community college transfer also drew three charges to make an impact down low.

"It helps all of us, but I just don't think the other team even sees her," Kopatich said of the 5-foot-5 guard. "No offense to her — she's thick. I'm just saying people don't even know she's there and it helps out a lot. It's a huge momentum-blow for the other team."

With Lyons going to the bench early in the fourth quarter after picking up her fourth foul, the Jayhawks struggled to stay in a rhythm offensively. Kansas only shot 3 for 10 from the field in the fourth quarter, but knocked down 10 of its 14 attempts from the charity stripe to put the game away.

Whether it was feeding the post or attacking on the dribble-drive, the Jayhawks were able to get to the line early and often by getting the ball inside. Richardson paced the KU bigs with 10 points, while freshman Bailey Helgren and junior Chelsea Lott added eight and seven, respectively. Confidence has been a big key for the Jayhawks down low.

"Coach (Schneider) always reiterates, 'That's your shot. Shoot that shot. That's your money spot right there,'" Richardson, who knocked down a couple of shots from just inside the free-throw line, said. 'So I listened to him and it worked for me."

The Jayhawks will turn their attention to a Texas Tech squad that dropped to 6-7 overall and 0-2 in the Big 12 after a 97-49 loss to Baylor on Sunday. The sixth-ranked Bears are also looming on the Jayhawks' schedule, which will feature back-to-back-to-back games against top-10 teams after the road tilt with Texas Tech. Kansas will play host to Baylor on Saturday and No. 9 West Virginia on Jan. 10 before traveling to No. 8 Texas on Jan. 13, but the Red Raiders are the only team that Schneider and the Jayhawks are focused on right now.

"If we play three straight top-10 teams — I mean, I'm sure we do — I just don't know who we have past Texas Tech to be honest with you. And I don't know much about Texas Tech," Schneider said. "We'll be getting into those guys later today (on film). I know their personnel pretty well and they've got good inside and outside play. And it's a road game. If you're going to be competitive in the league and you're going to try to position yourself for any type of postseason play, you've got to take care of your home court and you've got to steal some on the road regardless of who you are playing.

Kansas and Texas Tech will tip at 6:30 p.m. Wednesday at United Supermarkets Arena.

The ladies have improved from last year for sure- - making strides. A win Against Tech would be sweet. Road. ahead is gonna be really tough 3 straight ranked opponents - keep your heads p ladies your doing better -Nice win - -ROCK CHALK ALL DAY LONG BABY

It is really nice to see their development, even from the beginning of the season. Congratulations, and keep rocking ladies.

Last year KU lost to both of this year's first two opponents by 12 points or more. An O.T. loss at ISU and a home win 've a good TCU team shows Schnider was a good hire. Win vs TTech and KU will have matched last year's conference win total and all with out one or our best players.

Have seen significant improvements in this year’s team which is now filled with Schneider’s recruits. Getting some size and depth has made a huge difference, but Big 12 has many good players and teams. Keep competing Lady Jayhawks.

This was the most disciplined Ive seen this team play so far this season. They ran their offence to perfection, made crisp passes and put pressure on the defence for long periods of time thus having a direct effect on TCUs inability to hit jump shots from long range, a major part of their scoring thus far in this season.

TCU did nothing to take KU out of their game defensively.

Richardson is really good. We need more out of the post position.

Tcu lost to WVU by 5, KU can get that upset but as coach said not worried bout them yet!!

As stated these ladies are really improving.