Sacramento – Kansas basketball coach Bill Self moments after Thursday's 75-54 victory over Stanford at Golden 1 Center said there was no change in the status of Class of 2018 big man Silvio De Sousa on Thursday.

However, Self did provide a couple of snippets of new information in the 6-foot-9, 245-pound power forward's quest to join the Jayhawks in time for the upcoming second semester.

“No word,” said Self when asked about De Sousa after his postgame press conference. “We know a couple of the grades that were turned in, that were favorable, but we do not know any of the other ones and so there is no word.”

Self said he continued to believe the final word about De Sousa's eligibility at Kansas would come Friday — “We think by tomorrow,” he said — before adding, “Unless there's some hiccup and then we may have to appeal something, but we feel by tomorrow.”

If De Sousa receives the necessary grades from IMG Academy and is deemed eligible to play for the Jayhawks during the second semester, Self said his expectation was that the Angola native would report to KU's campus on Dec. 26, which is the date the rest of the Jayhawks are expected back following a short break to spend Christmas with their families.

As for the other unknown Kansas big man, Self said he continued to believe the final verdict in freshman forward Billy Preston's ongoing compliance saga also remained closer than ever to a resolution.

“The latest on Billy is that still the process is going on but we have been led to believe that it is coming to a head and we hope to know something very soon,” Self said.

Preston, like most of the KU team, went directly home to be with family from the Jayhawks' victory over Stanford in Sacramento and Self said he was glad Preston, of all of his players, had one of the shorter trips.

“He needs to see his mom and hang out, so I don't think it's harder (for him to head into break with his status still uncertain),” Self said. “Plus, he's going to L.A. for Christmas, so it's actually good that we were out here and it's an easy trip for him. I think if anything, it'll be good for him to get with his family and get away from it.”

Preston has missed all 12 of KU's games this season, the last 11 while KU officials investigate a compliance issue involving the ownership of Preston's vehicle, which was involved in a one-car, non-injury accident in mid-November. 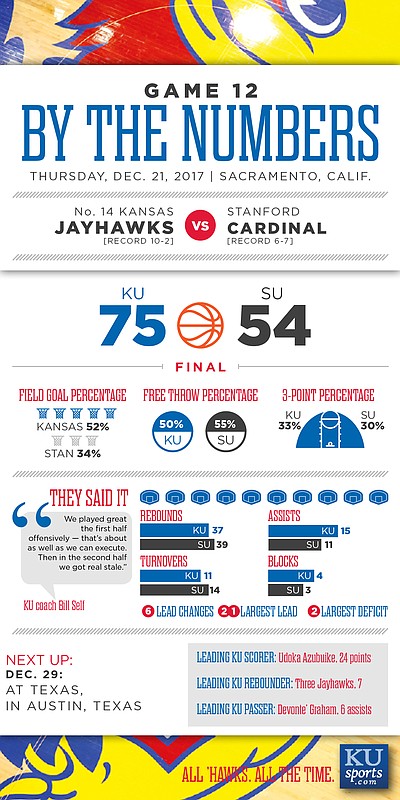 For KU to have a special season, they must have an effective Billy Preston on the court with an improving Udoka. The team looked best when feeding Udoka and getting back to a true high-low and a second big would help on nights when the threes are not falling regularly (example last night in the second half). Less minutes for Newman, Garrett and Cunliffe since the 4 and 5 (last night) guard lineups would not be used as much. Big 12 has some size and KU won't prosper if Garrett/Cunliffe are called again to play against bigger and more athletic centers.

I am hopeful that both will play. But something pretty simple had taken way too much time to figure out, in both instances. It's not that this is the first time a player from IMG Academy has gone on the the NCAA. And how difficult is it to run a VIN number and find our who owns a car? It seems for both players, the NCAA looks more at how not to approve them vs helping them.

im thinking that KU knows what happened, they just dont wanna cause more fuss by making it public..seems as though they are hoping when the NCAA gets ahold of the paperwork they will conclude that KU did more than enough investigation and his 12 game suspension is satisfactory enough for them to go ahead and clear him immediately

Solid logic Craig. But damn... How much more information could the NCAA possibly want, and that's for both Preston and Silvio?

More Preston &/or De Sousa and less (I hate to say this) Newman would be great for this team at this point. I hope Newman figures it out quickly, but he's not playing anywhere near preseason expectations.

I was thinking before the season Newman would take over as the Alpha Dog/Mason role. He seemed to have that hard nose, fired up attitude but I've really yet to see it. Hopefully he gets some confidence and involves his teammates more to take off the pressure and utilize the talent around him

Gee i miss Frank .....it was great to see him at the game last night.

Hopefully the Preston thing gets cleared up soon. I don’t see de Sousa having much of an impact until near the end of the season. But maybe he will be more effective than I think.

Malik is getting more comfortable every game out.

I don't see it yet. I think it's just a matter of his confidence and maybe trying too hard. I have no doubt that Malik will eventually find his way and let his talent take over.

Does the week end today or on Sunday?

IMG is a sports factory. If he can't get through there I don't know what to say. As for the impact of Preston and DeSousa, I think there is some undue excitement on here. The past few years have shown as many misses as hits with these kind of guys, especially De Sousa. The encouraging thing is that with more eligible players the chances of someone stepping up is greater. I have no idea who it might be. Personally, I have seen enough Big 12 Championships. I am more interested in a NC, and college B-Ball is so crazy that this team could gel at just the right time and make a run. Svi is so streaky that he could win a couple of games for us in March, or lose one. Same for Devonte. I still think back court and wings are the keys.

Since there was no word today and today was the last day before Xmas, with so many offices closing early [I'm sure the NCAA being one of them if they weren't closed already] and Xmas being on Monday, everybody gets back on Tuesday at the very earliest. Given the fact that the paperwork will need to be processed, approved, etc.I don't see this happening, if it happens at all, l before Wednesday or even Thursday.

Keep a grain of salt on hand.

It's 4:25 pm in Phoenix. I'm calling it the end of the week. Can someone call coach and get the decision?

Merry Christmas to all!

This all reminds me of so me of my salespeople who kept telling me a big account would close....soon. Every month they would project new sales numbers and always created budget and inventory nightmares.

Will we know something by Super Bowl Sunday?

Exactly what I was thinking, Roger!

a decision on both is expected very soon.......a couple of months max! lol