‘Proud for her’: Jayhawks claw past SEMO on late free throw 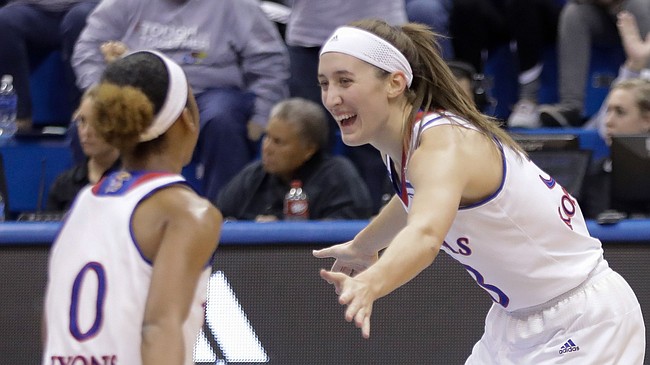 On a day when just about nothing bounced her way, Kylee Kopatich needed the extra second.

The junior, an 82-plus percent free-throw shooter all three years at Kansas, stood at the line for what should have been automatic points. She shot the first and clapped in frustration as it clanked off the rim. Her second missed as well, as did her first free throw her next time at the line.

Her teammates, redshirt sophomore Tyler Johnson and senior Chayla Cheadle, walked up to her in between shots. Cheadle, a “very positive” person, Kopatich said, reminded the sharpshooter simply to get out of her own head.

“That’s something I struggle with ‘cause I’m a person that expects perfection,” Kopatich said following the Jayhawks' 51-50 win. “And that’s very unrealistic, I know that, but it’s something that’s not going to change about me.”

After the talking to, Kopatich composed herself and sunk the free throw. In a down-to-the-wire game, it proved crucial.

Ahead by one late, the Jayhawks (8-1) defended a SEMO 3-pointer that ended up in the hands of Cheadle, who lay flat on the floor. She passed the ball to Kopatich who was fouled again and made two free throws.

On the ensuing possession it was Cheadle who again came up with the ball, though this time she bumped heads with SEMO’s Deja Jones and was forced out of the game.

“I thought Sydney (Benoit) made the biggest play of the game,” Schneider said. “And I think that’s a real credit, not only to her, but to anybody that’s in a reserve role. … I’m proud for her.”

Informed whoever he subbed in would take the ensuing free throws, Schneider turned to Benoit on the bench.

Benoit, who dealt with several injuries and played only eight minutes a year ago, entered the 3 point game with five seconds left. She missed the first free throw but made the second.

“It was frickin’ incredible,” Kopatich said. “Oh my gosh, we were all so hype for Sydney when we got back in the locker room.”

Ahead by four, KU survived after a deep 3-pointer by SEMO (4-7) splashed through the net at the buzzer.

The Jayhawks missed all 12 of their 3-point attempts on the day as well as nine of their 18 free throws. But Johnson came through with a team-high 14 points while Kopatich and Christalah Lyons added eight apiece in the win.

"You're not going to be on every night," Schneider said. "There's two games, at least for me as a coach, that I'm always really, really worried about playing: The one before finals, and the one right after.

"I've been coaching long enough to not always expect our team's very best in those two occasions."

Regardless of the way it looked, the victory marked the Jayhawks' eighth of the year, matching the total number of wins for the team all of last season.

As for Kopatich, the self-designated perfectionist had one part of the performance she was ready to move past. Asked about the last time she shot 4 for 8 at the free-throw line, Kopatich, normally armed with a smile, deadpanned her shortest answer of the night.

"Never," Kopatich said, "and it should never happen again."

proud of these girls..... kansas womens b-ball should be at the top just like their brothers. no excuse otherwise. i think schnieder is righting the ship