Kansas guard Malik Newman (14) cruises in for a bucket during the first half, Wednesday, Dec. 6, 2017 at Sprint Center.

Kansas City, Mo. — The game drew inside the three-minute mark and Kansas trailed by double digits. Malik Newman had the ball alone in the left corner with all the time in the world to bury a 3-pointer and ignite the comeback.

Newman didn't cash in and his struggles continued. His shot was long by so much it missed the rim. By a lot.

Newman's two 3-pointers with 48.7 seconds left were far too little, way too late in a stunning 74-65 loss to Washington at Sprint Center on Wednesday night.

Newman’s most memorable plays of the night were ones that didn’t end well. In the first half, he kept the ball instead of passing it and took off on a drive in a way that suggested he was going to put up a shot regardless of what crossed his path. He did and was whistled for a charge. Good call by the ref? Maybe not, but that wasn’t the point. Driving into trouble wasn’t a good call on Newman's part. 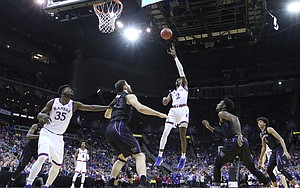 A second-half, head for-the-hoop-at-all-costs decision was met with a blocked shot.

Newman's not playing like a Bill Self pupil yet because Self basketball players play selfless basketball. They know that you make plays for others, others make plays for you, and in the end all that matters is that your team made more plays than the other team.

“He’s struggling," Self said. "I think if he would just worry about things that have an impact on us winning or not, he’d be better off. His shot's fine, but just not making plays for others, not pitching ahead in transition. He missed Devonte' (Graham) a couple of times wide open to keep the ball and then ended up not getting anything out of it. He's better than what he's playing and we need to get more out of him."

Washington’s wildly spread-out zone defense designed at making it difficult to shoot 3-pointers worked and Kansas made 5 of 20 from long distance.

Before Newman hit the two meaningless 3-pointers at the end, KU was 3 of 18 from beyond the arc.

First-year Washington coach Mike Hopkins, a longtime assistant for Syracuse’s Jim Boeheim, watched video of Graham lighting up the Orange for 35 points in Miami over the weekend and formulated a game plan he expressed during the post-game press conference: “If somebody else beats us, great, but he’s not going to."

Graham scored just three points and made 1 of 5 3-pointers.

That "somebody else" wasn’t Udoka Azubuike because he limited himself to seven first-half minutes by picking up his second foul, “94 feet away from the basket,” as Kansas coach Bill Self put it.

And it wasn't Newman. He had scored two points heading into the game's final minute.

"Right now, it's almost like they only have to guard two guys on the perimeter, Svi (Mykhailiuk) and Devonte', and Malik's a lot better than that," Self said. 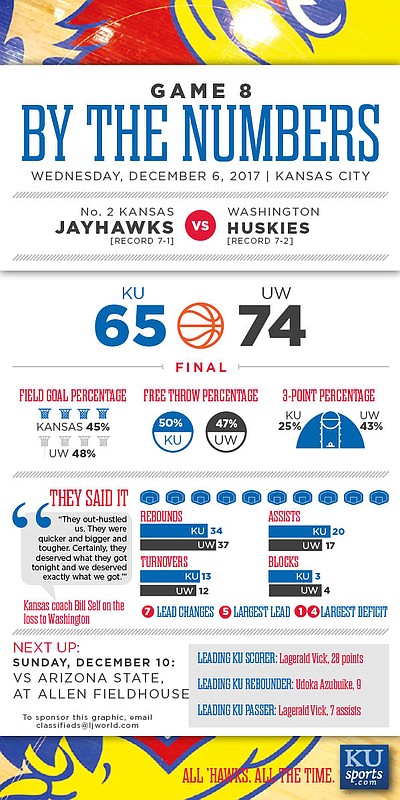 I'm not surprised anymore. Newman has got to learn to pass if he wants to see playtime. I'd rather we grow Garrett and let him play through freshman mistakes than watching Newman fail over and over. Heck, once there's a fastbreak, I already know what's gonna happen if the ball is in his hand.

Gotta find a way to make the team that sells out to shut down Devonte pay dearly for over-committing. Newman is a key part of that.

I gotta say... not really feelin' Malik Newman. I remember the recruiting of this guy out of high school and it was a headcase nightmare. He's now been in in the system with these guys for over a year and still seems like a ball-hog...... I think everyone in the world knows nobody likes a ball hog, especially when they aren't SCORING. He has the ability and has shown flashes of it, but really only one game..... and it was the game his parents attended. (shocker)

I like to think he'll get it turned around. Seems like a nice enough guy and has had some nice interviews, but..... at the end of the day, if it becomes consistently obvious over the next few games that he cant figure it out, i'd rather roll the dice with Garrett or Cunliffe starting.

[Time mark - I agree with TKegan, 6Dec17] MNewman is (and will represent) a bellwether for this season, especially once BigXII play begins. Team needs a reliable 12 to 15 pt/game from him with 4 rebounds/assists per game. He has got to be that Conference Newcomer that was anticipated.

Newman has been a surprisingly good rebounder. Other than that, he's the biggest disappointment other than Preston.

Newman at times reminds me a lot of Frank Mason as a freshman who would drive to the hoop and get stuffed like a Thanksgiving day turkey. He really needs to work on that part of his game a lot more, like Frank did, before he takes it all the way. He needs to dish it off 90% of the time until he knows how to draw a foul.

The game was about Graham’s inability to lead + the Jayhawks’ poor defensive effort. The problem was not Malik Newman.

Yea Mr. Brock for not further pounding Malik based on Keegan's very misinformed attack. Malik sat out a full year to play at KU. Has played pretty well up to UDUB game. When we all agree the whole team fell apart. Then he takes some shots that don't land...just like Svi and Devonte did all night. Bad game all around but he is not the problem, Preston IS!

Speaking of Preston, description of his eligibilty matter has been vague. What is the real deal? What is the compliance office truly investigating? Will he ever play for KU?

Is anyone else as irritated as I am by the constant references to Washington playing a "true" road game, KU playing at home, etc.? Sprint Center is NOT Allen Fieldhouse, and I hate that the NCAA has apparently changed its records to now count "homes away from home" as home games.

If KU plays like they did against Washington, Arizona State will have a easy Victory.

Malik Newman is an easy target for KU fans to be the whipping boy. Have to blame someone.

And now KU fans see why Mississippi State fans were not terribly upset Newman left. He and his dad only see the bright lights of the NBA! Horatio Webster is a Zero Calorie Lavar Ball.

At least he was trying to get near the basket to shoot or hand off. Doesn't work too well when the other four DO NOT MOVE to receive passes or get rebounds. We lost that because Coach apparently had to play Clay Young too long due to stupid fouls. Their two bigs ate him alive that entire time. The stupid fouls were on the play of Dok and Lightfoot, Malik didn't cause them. Cut this kid some slack, and hopefully the prodigal son can get eligible before he leaves for the G League.

I love Devonte, as do we all, he's an easy guy to love. But, when he has a poor shooting game, the whole team suffers. This was the case in the elite eight last year and again against Washington. The year before it was Perry that got stuffed in the elite eight game, and no one could make up those points. The thing is, when one guy has a bad game, we don't seem to have an effective plan "B" to shoot our way out of the game and make the other team adjust. This is the third year in a row with a short bench and no scoring threat coming off the bench. Coach needs to get and retain some depth that can shoot.

It's disheartening to see. The Malik Newman in Italy this summer is not who we are watching now. Seems like an entirely different player.